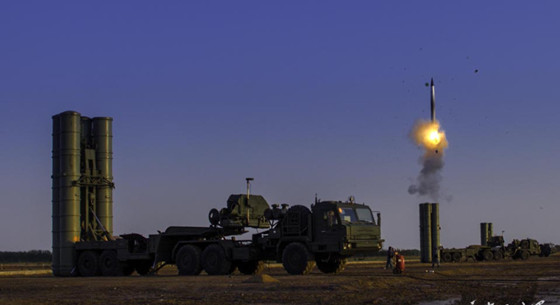 An Air Defence (AD) System, as the name implies, is a weapon system designed and equipped to deter, thwart and defeat an aerial threat. Further adapting this definition to the modern AD systems globally in vogue/ being fielded, an Integrated AD System (IADS) or key components thereof, must incorporate real time surveillance, weapon control and task management systems that can survive and operate in a harsh and hostile battlefield environment.

Establishment of Necessity and Overview

With a disproportionate increase in the quality and manifestation of aerial threats,  there was an imperative and urgent need to acquire an AD system capable of thwarting such threats in the Tactical Battle Area and at longer ranges simultaneously. The Russian S-400 Triumf AD System snugly fits this bill! As a lay example, a S-400 System deployed outside New Delhi would be able to track a Pakistani fighter aircraft immediately after take-off from Sargodha Air Base, near Lahore and engage it as it crosses the International Border. A similar capability to track/ engage aerial targets fielded by China from certain locations the Tibetan Autonomous Region would also exist.

The S-400 Triumf (translated as Triumph) ( NATO Code Name: SA 21 Growler) is an AD system developed by Russia’s Almaz Central Design Bureau, a Soviet/ Russian Military R & D enterprise. The S-400 has been in service since 1999 and is in use in China (China was the first country to sign a Government to Government contract with Russia in 2014 for delivery of two Regiments, completed in July 2019) and Turkey, with contractual processes underway/ finalized for India, Belarus, Saudi Arabia and some North African countries. 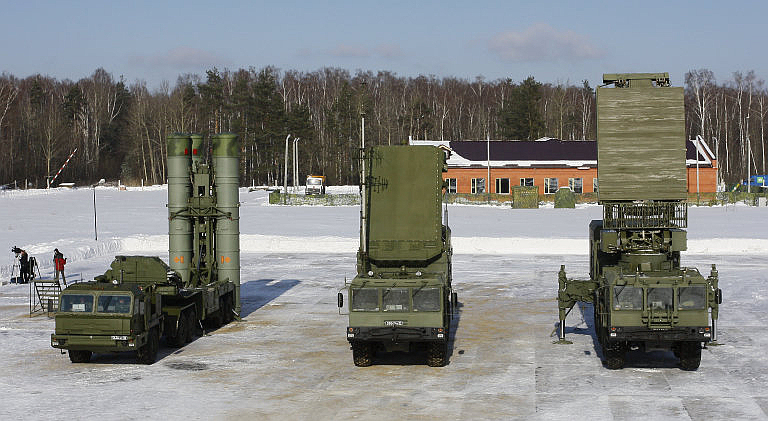 The development of the S-400 began in the late 1980s/ early 1990s, during the closing years of the Cold War. The Russian Air Force initially announced the S-400 System in 1993. Budget restrictions following the collapse of the Soviet Union limited Russia’s ability to design an entirely new AD system. Apropos, nearly 80% of the technology for the S-400 has been adapted from the erstwhile S-300 Long Range Surface to Air Missile (LR SAM) AD System, which includes the missile containers, launchers and radars. However, vastly enhanced target tracking/ engagement ranges and increased target engagement profile make the S-400 a far more potent AD system.

The system was approved for service in 2007 and in July the same year, succeeded in destroying two simulated targets flying at Mach 8 (approximately 2700 m/s), at an altitude of 16km. The first S-400 System was inducted for operational deployment near Moscow in August 2007. New anti- ballistic missiles were then added to the system in 2014. These missiles are also slated to be used by the S-500, which also has an unambiguously defined ICBM role.

The S-400 Triumf System is designed and equipped to operate in ‘stand- alone’ mode, though it would readily dovetail into an Integrated Air Defence System, incorporating all sensors, shooters and communication links. The LR SAM system has various missiles to cover the entire range spectrum upto 400 km, with the capability to detect and destroy targets flying at altitudes from 100m to 30 km. In the configuration chosen by India, in addition to the radars, each S-400 regiment will consist of eight launchers with two batteries. The system will operate under the Air Defence Command. The system components are elucidated below:- 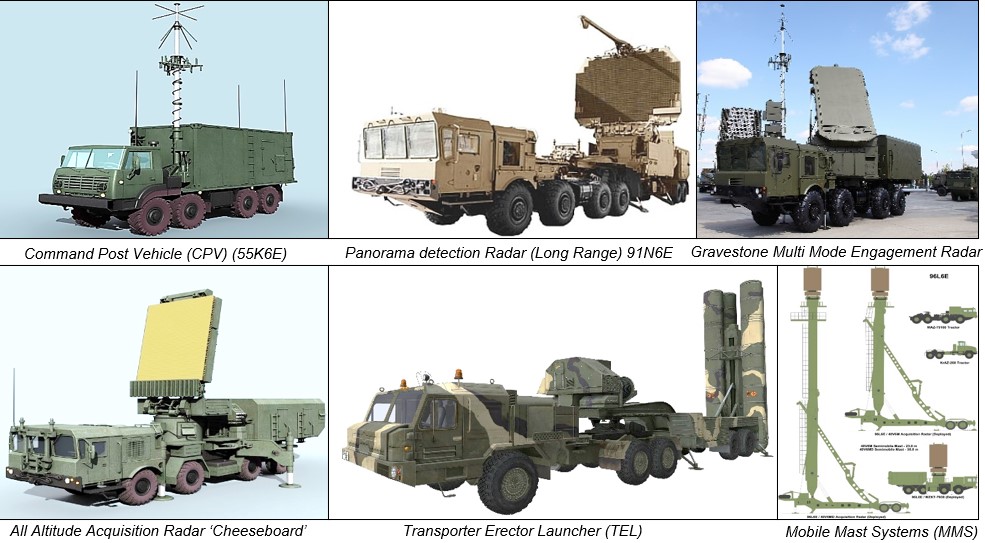 The salient characteristics of the S-400 System are tabulated below:-

Comparison With Other AD Systems

Comparison of the S-400 System with other leading AD systems are elucidated/ tabulated below:-

India And The S-400 Triumf System

India and Russia signed a Government to Government agreement during the BRICS Summit in October 2016 for supply of five S- 400 Regiments. The final signing of the US $ 5.4 Billion deal incurred delays due to the threat of US sanctions under the Countering America’s Adversaries Through Sanctions Act (CAATSA), imposed against Russia, Iran and North Korea in July 2017, with an aim to prevent trade partners of the US including India from entering into bilateral contracts with these countries. The threat of US sanctions was further spurred on by the fear that India would seek to establish an Anti-Access Area Denial (A2AD) umbrella over the subcontinent. Another reason for this threat was probably that India chose the Russian S-400 System over the US Origin PAC-3 Patriot and THAAD Systems. The deal was finally inked on 05 October 2018, with India ignoring the threat of US sanctions.

India is scheduled to receive the first consignment of the S-400 System in December 2021. Personnel of Indian Armed forces, with a major Indian Air Force contingent, are already deployed in Russia for training/ facilitation since January 2021.The first Regiment is likely to be delivered/operationalized by April 2022, the second by mid-2022 and the balance three by 2023. Deployment is likely to see three Units on the Western Front and two Units for Eastern Ladakh and the rest of the Northern Borders.

The acquisition of the S-400 Triumf AD System will greatly enhance and correct the imbalance in India’s AD capabilities, to cover the entire gamut of aerial threats. This capability was otherwise due to be only incrementally enhanced from a mere 40 km to a modest 70-100 km, with the induction of the Barak AD Missile System, a joint Indo- Israel venture. Mitigation of such aerial threats would afford imperative freedom of manoeuver to components of the three Services over all three domains, to successfully defend our homeland from external aggression.

Aug 13, 2021
Why we collect soo much war weapons when we not dominated our enemies on their knees. what is necessity when No use. if our neighborhood trained 1000 dogs and order to attack on our House and damaged our guest and family members.. properties...soo killing those dogs is not permanent solution. it is just retaliation of their action. dominant is somewhat when you hurt your neighborhood badly and realise them that they made a huge mistake to send their mad dogs. if we can't adopted this policy then nothing effective can happen. we are never believe in war but when situation is not good..you have to Ready for war. like American and Israel..is the best country for their enemies.

Jun 01, 2021
thanks sir for detail technical explanation and comparison with other module

Jun 01, 2021
very detailed information. thankyou. Highly appreciate the opportunity to have such an app with strategic information at your fingertips.

Jun 01, 2021
I read that the missile has Chinese electronics (which may be a part of electronic warfare), so wanted to know is it safe for our defense

Jun 01, 2021
India should develop satellite based air defence system . It is possible.