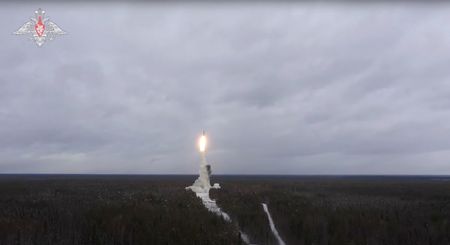 Even before the Russian military machine entered Ukrainian territory on February 24, the potential threat of escalation to a nuclear conflict had been raised. In the days before the invasion, Russia conducted a large-scale exercise involving simulated long-range conventional and nuclear strikes in response to a nuclear attack.

Then, as his troops poured across the border into Ukraine, Vladimir Putin issued a chilling threat to Nato and the west, saying they would face “consequences greater than any you have faced in history” if they interfered. Just days later, on February 27, the Russian president declared that he had ordered his country’s nuclear forces into a state of “special combat readiness”. But Russia’s threat to escalate to the use of nuclear weapons lacks credibility. While the use of nuclear weapons could wreak terrible destruction in Ukraine, it would not necessarily win the war for Russia. On the other hand, the risk that it could provoke a nuclear response from the west is high.

Russia has reviewed its policy on the use of its nuclear arsenal. In June 2020, the the Office of the President of the Russian Federation published an executive order: Basic Principles of State Policy of the Russian Federation on Nuclear Deterrence. The order has generated considerable debate about whether it is an indication that Russia might be more ready to use nuclear weapons than before.

The order noted that Russia considered nuclear weapons “exclusively as a means of deterrence”. Russia’s strategy, it said: is defensive by nature, it is aimed at maintaining the nuclear forces’ potential at the level sufficient for nuclear deterrence, and guarantees protection of national sovereignty and territorial integrity of the state, and deterrence of a potential adversary from aggression against the Russian Federation and/or its allies.

But the document does suggest that Russia might escalate to the use of nuclear weaponry if it faces losing a conventional conflict: “in the event of a military conflict, this policy provides for the prevention of an escalation of military actions and their termination on conditions that are acceptable for the Russian Federation and/or its allies”.

This has been widely described by US analysts as a policy of “escalate to deescalate”, although this characterisation has been denied by Russian military experts. It is hard to see how this would apply in the case of the current conflict, because Ukraine is defending itself against Russian aggression and not – at the moment, in any case – threatening Russia’s “national sovereignty” or “territorial integrity”. Russia is entirely in control of escalation and can end the war at any time.

Not only that, but it is hard to see how even a smaller, tactical nuclear weapon could be used in the context of Ukraine as there are not big enough concentrations of Ukrainian troops to make it effective. The contingencies that could result in the use of Russian nuclear weapons discussed in the document on the Basic Principles of 2020 referred to above include the launch of ballistic missiles “attacking the territory of the Russian Federation and/or its allies” or other uses of weapons of mass destruction against Russia and its allies.

They also include “attack by adversary against critical governmental or military sites of the Russian Federation, disruption of which would undermine nuclear forces’ response actions” as well as “aggression against the Russian Federation with the use of conventional weapons when the very existence of the state is in  jeopardy”.  Any nuclear strikes against targets inside Ukraine would also cause major operational problems because Russian forces are on the ground in pretty much every part of Ukraine. A nuclear strike anywhere in Ukraine before Russian forces have substantially retreated would not only kill a large number of civilians, but destroy large numbers of Russian troops and equipment, too.

Moreover, it would create insuperable challenges for integrating the country into the Russian Federation after the conflict – if that was the intention. The recent statements in the 2020 document on Russia’s nuclear doctrine again confirmed that the main purpose of Russian nuclear forces is deterrence and not fighting an offensive war. But as the progress of the Russian army in Ukraine has stalled and Russia is sending signals that it might pull back from western Ukraine and focus on Luhansk, Donbas and Crimea, there have been renewed assertions by senior Russian figures of Russia’s right to use nuclear weapons.

The former president, Dmitriy Medvedev – one of Putin’s key advisors – said on March 26 that there was a “determination to defend the independence, sovereignty of our country, not to give anyone a reason to doubt even the slightest that we are ready to give a worthy response to any infringement on our country, on its independence”.

This was clearly directed at the west and apparently aimed at deterring Nato intervention. It appears that the more desperate Russia is to discourage western involvement, the more strident the tone has become regarding the possible use of nuclear weapons. In this respect, Russia’s use of its nuclear arsenal as a deterrent has so far been successful.

But the Russian leaders also know that there are three nuclear powers in Nato and a nuclear conflict risks the complete destruction of Russia. There has been considerable speculation that Putin might become so desperate that he would be capable of anything to salvage his situation including “pressing the button”. But there is no plausible scenario in which the use of nuclear weapons would save the day for Putin.