Germany’s IRIS-T SLM Air Defence System: A Shot In The Arm For Ukraine? 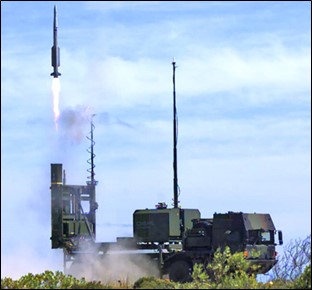 The Russia Ukraine War (RUW) is replete with instances of large and small-scale ground battles or duels, both in built-up and rural areas. While inputs emerging from this imbroglio differ in opinions on relative successes by either side so far, what stands out unambiguously is the fact that the Command of the Air- Air Supremacy- repeated Air Superiority, in that diminishing order, that Russia had sought to impose over Ukraine to allow ground forces to operate with impunity, still proves elusive. Several reasons have been attributed to this, including the continued survival and operation of a viable Ukrainian Air Force and the presence of a very effective short and medium-range Air Defence (AD) capability.

The Ukrainian AD Force (UADF) has a plethora of AD systems on its Order of Battle, currently led by the S-300, a family of Soviet and later Russian long-range Surface to Air Missile (SAM) systems, designed specifically as defence against aircraft and cruise missile threats, for protection of large logistics facilities and military bases. All or most of the following also make up the inventory of the Ukraine AD Force- the SA-6 Medium Level SP AD Missile System, Buk Medium Level SP AD Missile System, SA-15 SAM, and SA-3 Short Range SAM. While the profile of the AD systems may be diverse, the numbers are limited and some of these are vintage systems with questionable efficacy against the modern breed of Russian frontline combat aircraft and an ever-present missile threat. External aid to bolster Ukraine’s AD capability includes the man-portable Stinger AD SAM of the US and the ‘on-the-anvil’ Starstreak man/vehicle portable SAM from the UK. Both these systems are short-range AD systems which are useful for point or close-in AD and are not suitable for engagements of fast-moving aircraft capable of delivering Beyond Visual Range (BVR) munitions or for engaging ballistic missiles at higher altitudes, which presently account for the most potent aerial threat to Ukraine.

Why Has Ukraine Expressed Interest in the IRIS-T SLM?

The S-300 SAM System is capable of engaging manned/unmanned aircraft and cruise missiles (the later versions of the S 300 are also capable of ballistic missile interception). While the reported number of S 300 batteries in Ukraine’s inventory vary between 100 and 200 at the start of the RUW, Russia claims to have destroyed at least half of these systems. This leaves the balance inadequate to meet the country’s AD requirements for holistic protection of critical assets/ targets. The SA-3 SAM System stops short of being a medium-range (MR) SAM with ranges up to 25 Km and engagement altitudes up to 14 Km, depending on variant and is therefore only partially effective against stand-off aerial attacks. The SA-15 also falls in the category of short-range AD systems, with a max range of 12-16 Km. While the SA-6 is a medium to long-range SAM system, the numbers available with Ukraine are apparently inadequate to complement the S-300 batteries. The Buk Self-propelled (SP) SAM System, a successor to the SA-6, is a potent and modern all-weather medium-range SAM System which can counter cruise missiles and manned/ unmanned aerial targets. Ukraine is believed to operate the Buk 9K37M missiles, with a max engagement range of 35 Km and an interception altitude of 22 Km. The Ukrainian inventory was thought to contain about 100 Buk Missiles at the start of the RUW ( figures may vary), out of which a significant number are likely to have been utilized against Russia in the war.

Ukraine’s dwindling AD resources and the fact that Russia is increasingly resorting to the use of aerial bombardment and surface-to-surface cruise/ballistic missiles, has forced the former to look at NATO for answers to fill the apparent gaps in its AD umbrella. One such candidate that has emerged is the German vehicle-mounted Infra-Red Imaging System-Thrust Vector Controlled Surface Launched Medium Range (IRIS-T SLM)   AD System. Ukraine has expressed interest in acquiring up to 10 of these systems.

The German Federal Assembly approved the supply of heavy weapons to Ukraine on 28 April 2022. On 09 May 2022, German Chancellor Olaf Scholz stated that Russia’s continued aggression has forced Germany to consider supply of weapons to Ukraine. In case approved for supply, Ukraine is likely to receive the first IRIS-T SLM AD System by November this year, with the balance delivered over the next three to four years. The German Government has already sold  7-10 systems to Egypt over the last three years.

The IRIS-T SLM is the low-altitude AD component of NATO’s MEADS, which has a stated role to provide AD to static installations and mobile forces against manned/ unmanned fixed-wing aircraft, helicopters, cruise missiles and ballistic missiles. The MEADS is a joint venture between the US, Germany and Italy and is intended to replace the Patriot AD Missile System in use in the US/Germany as well as Italy’s Nike Hercules AD Systems. The other component of the MEADS is the PAC 3MSE (Missile Segment Enhancement), which is the latest SAM developed by Lockheed Martin for the Patriot SAM System, with the primary task to counter ballistic and cruise missiles. Germany chose the MEADS to replace their MIM-104 Patriot AD Missile Systems in mid- 2015. The system is operated by the German Air Force. Ukraine, however, has only expressed interest in the IRIS-T SLM component, as per available inputs.

A single MEADS battery is stated to be capable of providing AD to a Vulnerable Area (VA) eight times the size of the corresponding VA that a conventional Patriot battery is capable of defending. This is made possible through use of advanced radars, near-vertical launch capability, and the longer ranges of component missiles. The MEADS radars enable complete exploitation of the component missile ranges. The Multi-Function Fire Control Radar is an Active Electronically Scanned Array (AESA) Radar, which provides precision-tracking and target discrimination classification capabilities. The AESA Radar uses its main beam for missile guidance, eliminating the need for a separate guidance array. This radar also provides friend or foe identification (IFF) capability. The Ultra-High Frequency (UHF) MEADS Surveillance Radar is a 360-degree AESA Radar that provides extended range coverage, with threat detection capability against highly manoeuvrable low-signature threats, including those already mentioned. The MEADS  Tactical Operations Centre (TOC) provides battlefield management (BM) as well as C4I functions. It controls an advanced network-centric open architecture that allows any combination of sensors and launchers to be organized into a coherent AD entity. The MEADS launcher is easily transportable, tactically mobile, and capable of rapid reload.

Combat flexibility is achieved by way of the ability to disperse MEADS batteries over a wide geographical area, with dynamic command & control  of the missiles/ launchers between HQ or Operations Centres, even while on the move, without the requirement to shut down these systems. 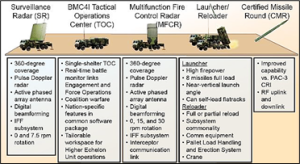 The IRIS-T Surface Launched Medium-Range mobile vehicle-mounted SAM AD System is manufactured by German company Diehl BGT Defence. The IRIS-T SLM is an improved version of the IRIS-T air-to-air guided missile, which entered service in December 2005. System development commenced in 2007 and two years later, the missile successfully completed its maiden test flight! The first operational prototype was successfully test-fired against a UAV in December 2012. Subsequently, the SAM was approved for induction into operational service in 2017, with near-simultaneous selection by the Norwegian and Swedish Defence Forces. Final operational efficiency tests were conducted by Diehl Defence in end 2021. The IRIS-T SLM has been configured with open system architecture, thus providing maximum flexibility for integration into overall AD structures of user countries as well as for upgradation/modernization of legacy equipment. Due to the inherent ‘Plug & Fight’ capability, IRIS- T SLM can be easily dovetailed into present and future ground-based AD systems and C4I networks. 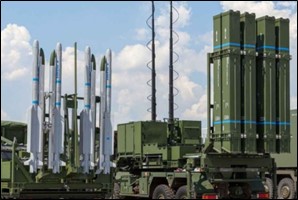 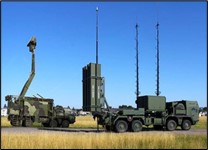 The IRIS-T SLM is frequently compared to the Buk-M1-2 Medium Range SAM System developed by USSR/ Russia, which can also counter cruise missiles, smart bombs, aircraft, helicopters and UAVs, with a similar maximum engagement range of 40 Km. A Buk missile battery consists of one Transporter-Erector-Launcher (TEL)  and two TEL & Radar (TELAR) vehicles. The radar is utilised for target acquisition.

As a further comparison, India’s Medium Range SAM (MRSAM), developed jointly by Israeli Aerospace Industries (IAI) and DRDO, has a range of 70 km, which essentially fills the medium-range interceptor gap of the Indian Armed Forces. The missile has close to 70% indigenous content. It is a supersonic interceptor with a 60 Kg HEPF warhead, is 24-hour capable and can engage multiple targets simultaneously, in all weather conditions. The first deliverable Firing Unit of the MRSAM was handed over by  Hon’ble Defence Minister, Shri Rajnath Singh to the Indian Air Force on 09 September 2021.

Ukraine’s expression of interest in the IRIS-T SLM and the favourable response from the missile system’s country of manufacture, Germany, signify the renewed efforts by NATO to bring in heavy weapons aid to Ukraine. This is also likely to be a precursor for offer of a larger number of operational/ strategic level weapons supplies to the beleaguered Black Sea Nation in the foreseeable future.