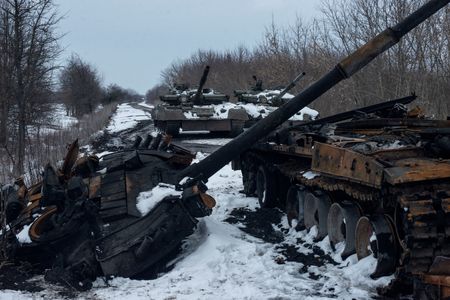 LONDON (Reuters) – Russia has reframed its war goals in Ukraine in a way that may make it easier for President Vladimir Putin to claim a face-saving victory despite a woeful campaign in which his army has suffered humiliating setbacks, military analysts say.

Russia attacked its neighbour by land, air and sea on Feb. 24 and pushed as far as the capital Kyiv – where its forces have been stalled for weeks – in what Ukraine and the West said was a bid to topple the democratic government of President Volodymyr Zelenskiy.

On Friday, however, a senior military official said the real objective was to “liberate” the Donbass region of eastern Ukraine, where Russian-backed separatists have been fighting the Ukrainian army for the past eight years.

“The main objectives of the first stage of the operation have generally been accomplished,” said Sergei Rudskoi, head of the Russian General Staff’s Main Operational Directorate.

“The combat potential of the Armed Forces of Ukraine has been considerably reduced, which … makes it possible to focus our core efforts on achieving the main goal, the liberation of Donbass.”

Donbass, where Putin has accused Ukraine without evidence of waging “genocide” against ethnic Russians – has long occupied a prominent place in Moscow’s litany of grievances against Ukraine.

But if capturing the whole of Donbass had been the objective from the start, Moscow could have mounted a much more limited offensive and spared itself the effort and losses involved in invading Ukraine from the north, east and south.

“Obviously they have completely failed in everything they’ve set out to do and so now they are redefining what the purpose is so they can declare victory,” said Ben Hodges, a former commander of U.S. army forces in Europe who now works for the Center for European Policy Analysis.

“Clearly they do not have the ability to continue sustained large-scale offensive operations… Their logistics problems have been apparent to everybody, they’ve got serious manpower issues and the resistance has been way beyond anything they could have possibly imagined.”

The costs of Russia’s “special military operation” have been steep. Rudskoi, the General Staff official, on Friday acknowledged 1,351 deaths among Russian soldiers. Ukraine claims the real figure is more than 10 times as high.

Oryx, a Dutch military blog that records both sides’ equipment losses based on verifiable photos and video, says Russia has lost 1,864 pieces of hardware including 295 tanks, 16 planes, 35 helicopters, three ships and two fuel trains. It has verified Ukrainian losses of 540 items, including 77 tanks.

Each side makes regular claims of the amount of enemy equipment it is destroying, but neither confirms its own losses.

Thwarted in its offensive, Russia has resorted to pounding cities to rubble with rockets and artillery.

“The advance is stalled or at best very slow at this stage,” said Nick Reynolds, a land warfare analyst at the RUSI think-tank in London.

Russia has more work ahead to achieve even the more modest goal of driving Ukraine’s forces out of the east. Of the two regions that make up the Donbass, its defence ministry says Russian-backed forces control 93% of Luhansk but only 54% of Donetsk.

Deputy Chief of Staff of Ground Forces Oleksandr Gruzevich said on Friday that Russia would need three to five times more forces to take Kyiv, and was being blocked in its efforts to establish a land corridor across the south coast to link up annexed Crimea with Donbass.

Hodges, the retired U.S. general, said the question now was whether the West would be bold enough to overcome its fears of a Russian escalation using chemical or nuclear weapons – which he said would offer no tactical advantage to Moscow – and step up support to Ukraine even further.

He said more equipment such as long-range rockets, artillery and drones, coupled with provision of Western intelligence, could enable Kyiv to move from defence to attack.

“We’re only parcelling out support to Ukraine instead of flooding them,” he said. “It feels like we want to keep them from being defeated but we’re not willing to let them win.”