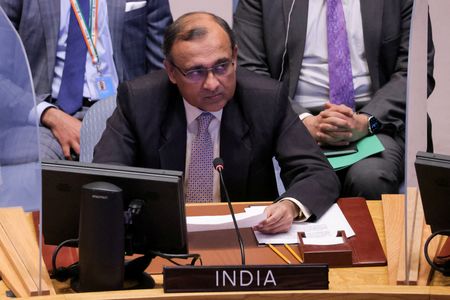 United Nations, Apr 5 (PTI) India on Tuesday unequivocally condemned the “deeply disturbing” reports of civilian killings in the Ukrainian city of Bucha and supported the call for an independent investigation, as it underlined that when innocent human lives are at stake, diplomacy must prevail as the only viable option.

“The situation in Ukraine has not shown any significant improvement since the Council last discussed the issue. The security situation has only deteriorated, as well as its humanitarian consequences,” India’s Permanent Representative to the UN Ambassador T S Tirumurti told a meeting on Ukraine in the UN Security Council that was addressed for the first time by Ukrainian President Volodymyr Zelenskyy.

Thanking Zelenskyy’s participation at the meeting, Tirumurti said “recent reports of civilian killings in Bucha are deeply disturbing. We unequivocally condemn these killings and support the call for an independent investigation.” UN Secretary General Antonio Guterres, in his address to the Council, said that he will never forget the “horrifying images of civilians killed in Bucha” and immediately called for an independent investigation to guarantee effective accountability. “I am also deeply shocked by the personal testimony of rapes and sexual violence that are now emerging.” Images and videos of people lying dead on the streets of Bucha, some with their hands tied behind them, drew global condemnation and calls for investigation and tougher actions against Russia.

At the UNSC meeting, Zelenskyy after his nearly 20-minute speech asked for a video to be played in the Security Council that showed horrific images of corpses lying on the streets, charred bodies and pictures of mass graves across various Ukrainian cities. Some of the dead had their hands tied behind their backs and mouths gagged, including children.

Tirumurti said India continues to remain deeply concerned at the worsening situation and reiterates its call for immediate cessation of violence and end to hostilities. “We have emphasised right from the beginning of the conflict the need to pursue the path of diplomacy and dialogue. When innocent human lives are at stake, diplomacy must prevail as the only viable option,” he said, adding that India takes note of the ongoing efforts, including the meetings held recently between the Parties.

Tirumurti noted that the impact of the crisis is being felt beyond the region with increasing food and energy costs, especially for many developing countries. “It is in our collective interest to work constructively, both inside the United Nations and outside, towards seeking an early resolution to the conflict.” He expressed hope that the international community will continue to respond positively to the humanitarian needs and supported calls urging for guarantees of safe passage to deliver essential humanitarian and medical supplies.

“These measures should never be politicised,” he said, adding that India continues to emphasise to all member states of the UN that the global order is anchored on international law, UN Charter and respect for territorial integrity and sovereignty of states. Guterres said that the High Commissioner for Human Rights Michelle Bachelet has spoken of possible war crimes, grave breaches of international humanitarian law and serious violations of international human rights law.

The UN chief expressed concern that war has displaced more than ten million people in just one month – “the fastest forced population movement since the Second World War.” He asserted that the war in Ukraine must stop now and there is need for serious negotiations for peace, based on the principles of the United Nations Charter.

While the Security Council is charged with maintaining peace and doing so in solidarity, Guterres voiced deep regret over the “divisions” that have prevented the Security Council from acting not only on Ukraine, but on other threats to peace and security around the world. “I urge the Council to do everything in its power to end the war and to mitigate its impact, both on the suffering people of Ukraine, and on vulnerable people and developing countries around the world.”