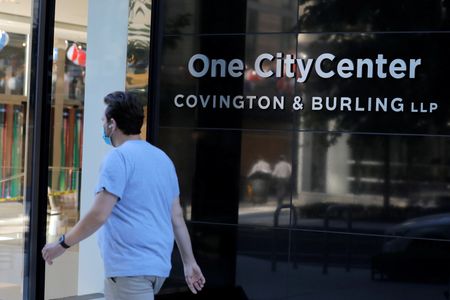 (Reuters) – Ukraine has hired U.S. law firm Covington & Burling to pursue its claim against Russia at the International Court of Justice at the Hague over the ongoing Russian invasion, a firm spokesperson said Tuesday.

Ukraine said in a court filing on Sunday that Russia had “falsely claimed that acts of genocide” occurred in parts of Ukraine as a pretext for its invasion. It asked the ICJ, the United Nation’s highest court, to order Russia to halt its military operations in Ukraine. “I can confirm that Covington has filed a claim at the International Court of Justice on behalf of our client Ukraine,” a firm spokesperson wrote in an email on Tuesday.

Russian President Vladimir Putin had repeatedly asserted that Ukraine committed “genocide” in the Donbass region of eastern Ukraine, without presenting evidence, and said the invasion, called a “special operation” by Russian officials, was therefore justified to end it. Covington, a prominent Washington, D.C.-based firm that includes former U.S. attorney general Eric Holder on its staff, has represented Ukraine in several other matters, including a past case https://www.cov.com/en/news-and-insights/news/2019/11/covington-secures-decisive-victory-for-ukraine-before-the-international-court-of-justice before the ICJ.

The court in 2019 found that it had jurisdiction to hear Ukraine’s claims of Russian violations of international law related to racial discrimination and the financing of terrorism in Crimea. That case is pending. The ICJ is set to hear Ukraine’s arguments in the current case on Monday and Russia’s representatives will argue on Tuesday, on whether the matter is urgent enough to require immediate action. The court’s rulings are binding, though states including Russia have previously ignored them.

Six days into the Russian invasion, Ukrainian President Volodymyr Zelenskiy has called for Russia to stop bombing Ukrainian cities before resuming talks. Russian forces have heavily bombed the city of Kharviv, but a U.S. official said a column of Russian troops has been halted by logistics issues. Reuters could not immediately determine who is representing Russia in the proceedings. A spokesperson for the Russian embassy in Washington, D.C., did not immediately respond to a request for comment.

A Covington spokesperson did not respond to questions about how much the firm is charging Ukraine and when it had been hired. Ukraine’s legal team at 1,100-lawyer Covington is led by Washington, D.C., partners Marney Cheek and David Zionts, as well as London-based partner Jonathan Gimblett, the firm spokesperson said.