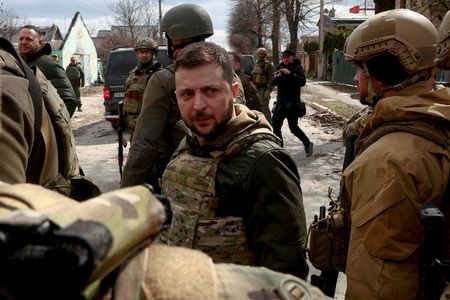 (Reuters) -Ukrainian President Volodymyr Zelenskiy said he would address the U.N. Security Council on Tuesday and predicted further, worse instances of mass killings of civilians by Russian troops would be discovered.

Tuesday’s Security Council session is to consider Ukrainian allegations of the murder of civilians by Russian soldiers in Bucha, northwest of Kyiv, following the discovery of hundreds of bodies, some bound and shot at close range.

Russia has categorically denied the accusations, calling them “criminal provocations” and says it will present “empirical evidence” to the Security Council that its forces have not been involved in atrocities.

The Ukrainian leader has already spoken by video link to more than a dozen assemblies – including the U.S. Congress, the British parliament and the European Parliament.

“I would like to emphasise that we are interested in the most complete, transparent investigation, the results of which will be known and explained to the entire international community,” a stern looking Zelenskiy said in his nightly video address in early hours on Tuesday.

In Bucha, where mass graves and bodies were found after Ukraine took the town back from Russian forces, at least 300 civilians had been killed, Zelenskiy said.

“And this is only one town: one of many Ukrainian communities which the Russian forces managed to capture,” he said. “Now, there is information that in Borodyanka and some other liberated Ukrainian towns, the number of casualties of the occupiers may be even much higher.”

Ukrainian authorities say they have restored control over all of Kyiv region and other districts after Russia announced it had shifted its aims away from Kyiv and Chernihiv in the north to secure control over all the eastern Donbas region.

Around Kyiv, Chernihiv and Sumy regions further north and east, “the occupiers did something that the locals did not even witness during the Nazi occupation 80 years ago”, Zelenskiy said.

It was in Ukraine’s interests to have “thousands of journalists there. As much as possible! Let the world see what Russia has done,” he added.

He said Russian forces did not conceal what happened in Bucha but could well do so in other places they had occupied.