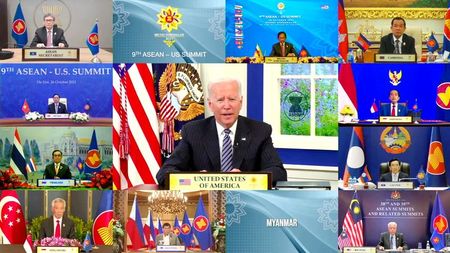 WASHINGTON (Reuters) -President Joe Biden on Wednesday told a summit of East Asian leaders that the United States was deeply concerned by China’s “coercive” actions across the Taiwan Strait, calling it a threat to peace and stability.

Speaking at the virtual event also attended by Chinese Premier Li Keqiang and other regional leaders, Biden reiterated that the United States had a “rock-solid” commitment to Taiwan.

“We are deeply concerned by China’s coercive … actions,” Biden said, charging that they “threaten regional peace and stability.”

“The U.S. is committed to Taiwan. In fact that commitment is rock solid and consistent across administrations. It continues to be the maintenance of peace and stability across the Taiwan Straits and within the region,” he said.

Biden last week said the United States, which is obliged by a 1979 law to provide Taiwan with the means to defend itself, would come to Taiwan’s defense if it was attacked by China. Those comments caused a stir because they appeared to depart from a long-held U.S. policy of “strategic ambiguity” as to how Washington would respond to such a scenario.

The White House said Biden was not signaling a change in U.S. policy toward Taiwan, and some analysts dismissed his comments as a gaffe.

Tensions between Taiwan and China have escalated in recent weeks as Beijing raises pressure on the island it claims as its own with repeated air missions over the Taiwan Strait, the waterway separating the island and the mainland.

China expressed displeasure at Biden’s comments last week. Its foreign ministry urged Washington “not to send the wrong signals to the forces of Taiwan independence, to avoid seriously harming Sino-U.S. ties and peace and stability in the Taiwan Strait.”