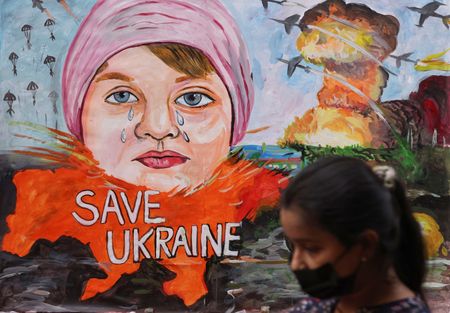 By Michelle Nichols and Humeyra Pamuk

UNITED NATIONS (Reuters) -The United Nations Security Council will vote on Friday on a draft resolution that would condemn Russia for invading Ukraine and require Moscow to immediately and unconditionally withdraw, but the measure is set to fail because Moscow can cast a veto.

The U.S.-drafted resolution is then expected to be taken up by the 193-member U.N. General Assembly within days, a senior U.S. administration official, speaking on condition of anonymity, said earlier on Thursday.

Although action will be blocked in the 15-member Security Council, Washington and allies see a vote as a chance to show Moscow is isolated over its actions. Diplomats said it appeared at least 11 members would vote in favor, while it was unclear how China, India and the United Arab Emirates would vote.

U.S. Secretary of State Antony Blinken spoke with his counterparts in India and the UAE about Ukraine on Thursday, the State Department said. On China, U.S. President Joe Biden declined to comment on U.S. lobbying efforts over Ukraine, while on India he said talks continued but weren’t “resolved.”

The draft Security Council resolution, seen by Reuters, would condemn Russia’s “aggression” against Ukraine, demand it “immediately, completely, and unconditionally withdraw  all of  its military forces” and reverse its recognition of separatist regions in eastern Ukraine as independent.

The text also reaffirms the council’s “commitment to the sovereignty, independence, unity, and territorial integrity of Ukraine within its internationally recognized borders.”

Although the draft resolution would be blocked, Washington views the Council “as the critical venue in which Russia must be forced to explain itself,” said the senior U.S. administration official. “We’re not going to abandon our principles. We’re not going to stand by and do nothing.”

Russia is one of the Council veto powers, along with the United States, China, France and Britain.

The moves at the United Nations appear set to mirror what happened in 2014 after Russia annexed Ukraine’s Crimea region.

The Security Council voted on a U.S.-drafted resolution opposing a referendum on the status of Crimea and urging countries not to recognize it. It received 13 votes in favor, China abstained, and Russia cast a veto.

The U.N. General Assembly then adopted a resolution declaring the referendum invalid. It received 100 votes in favor, 11 against and 58 abstentions, while two dozen countries didn’t vote.