The Yangtse Standoff : With or Against the Run of Play 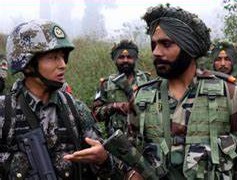 One of the highlights of the ongoing FIFA World Cup in Qatar are some of the results against the run of play. A perfectly balanced game suddenly goes in favour of a side willing to show a brief spurt of energy and activity. The situation at the Line of Actual Control (LAC) between India and China all along the Northern borders is something similar; it remains stable on the basis of near balanced deployment where campaign style operations involving capture of large tracts of territory is near impossible unless temporarily a local superiority is established through surprise and deception. Such situations have the scope to deliver an impact which can be larger than that of even campaign-like operations. The context here is the incident of 9 Dec 2022 at Yangtse in the Tawang sector of Arunachal Pradesh.

What is known so far is that on an Indian Army post at approximately 17000 feet in the Yangtse sub sector of Tawang, an attempt to surround the post and evict the 50 odd personnel (approximately a company less a platoon) was made by a battalion strength (300 personnel) of the People’s Liberation Army (PLA). It was a deliberate action at 3 AM in the morning and not a contingency arising out of any verbal or other disagreement on ground. Strangely it was also a situation gone through without a shot being fired but with much jostling, physical abuse and use of improvised weapons such as clubs and machetes, which is the new normal at the LAC. The Indian soldiers were well prepared and appear to have had the required intelligence of the PLA intent. There seems to have been some kind of rehearsed response which enabled them to muster sufficient strength to beat back the PLA ‘attack’ using the same tactics.

Many questions arise from this encounter. First, are the sixteen rounds of Corps Commander talks in Ladakh limited to the local environment and not towards building trust and understanding to avoid future Galwan like events which presumably arose due to a contingency involving heated arguments over non implementation of an agreement a few days prior. Second, this was not a patrol clash and a deliberate effort to evict a well-established Indian post on the LAC in such a brazen way with efforts towards gaining surprise, is unusual. Can more of these be expected in the other areas – Sikkim, Central Sector (Uttarkhand and Himachal Pradesh) and Ladakh. Thirdly, why do the rules of engagement remain so utterly grey?

An attempted eviction of our troops from territory legitimately claimed by us, of which no maps of counter claims have ever been handed over to us despite our continued requests, should be treated as a tactical operation and the use of firearms must be permitted whatsoever be the escalation involved. This response on equal terms is doing no good to our moral dominance of the LAC. Fourth, is this all a lead up to an inevitable war between the two most populous countries of the war, with two very large economies and two extremely large sets of armed forces which are also nuclear enabled.

The answer to these queries leads us to believe that the initiation of ‘walk-in’ operations in 2005 was a ploy, and a strategy to progressively up the ante, execute ‘salami slicing’ and achieve a moral dominance of the LAC zone through denial of patrolling, frequently changing claim lines and attempts to secure grounds of tactical importance from where observation could be carried out. All this contributes to the Chinese concept of wolf warrior strategy which is also based upon the power of the grey zone which prevents clarity and leads to confused and aimless response by an adversary which was what China aimed for India to respond with.

In Apr-May 2020 at the height of the first wave of the pandemic the PLA moved into Ladakh with no intent to secure or capture territory; 60,000 troops were insufficient for that. India responded with 60,000 of its own troops and raised the deployment of armoured vehicles to ten regiments worth, an expensive but necessary step. China hoped to dent India’s strategic confidence with this operation a contributing factor at the height of the pandemic.

At the bottom of all this lie two factors which make this appear a compulsion for China. First the alarming prospect of India developing faster and acquiring a higher position of geopolitical significance than what had been appreciated by the world at large and China in particular. It acts as a spoiler in China’s game plan aimed at its own uncontested power and greatness in the future. One more Asian power, and that too one willing to acquiesce to cooperation with the West led by the US, is not a welcome development. It needs to be browbeaten now and its rising strategic confidence neutralized at an early stage.

I firmly believe this was the reason why in Apr-May 2020 China decided to turn a perfectly progressing process of normalization of relations and rebuilding of trust into a situation of denting India’s strategic importance and confidence. A similar situation was and continues developing even now in the wake of PM Modi’s rise in international stature after his advice to President Putin on the pursuit of the war in Ukraine. An added contributory factor is India’s current leadership of the G20 group which will afford it the chances of enhancing its reputation and stature even further.

All the above may yet be conjecture but there is no escaping the fact that China’s grand strategy against India involves entangling India through land based (continental) threats so that its focus does not shift where China’s own vulnerability lies – the maritime zone. That does not discount air violations, which again seems to be introduced this time for effect to showcase a larger threat. Air violations without matching resources on ground are always viewed as intimidatory and nothing more. The bottom-line question that the public seems to be asking every man in uniform is whether the situation is building up to inevitable war with China. I continue to believe that the environment does not present itself to China to believe in an inevitable military victory against India’s armed forces; far from it. The Ukraine war has come as a good spoiler and rightly projects the unpredictability of conventional operations.

China will need to redeploy many resources to build the ratios required for any semblance of military victory in the high Himalayas against an experienced Indian Army. The Chinese economy isn’t doing well, and the Coronavirus seems to be a threat made to continue afflicting the Chinese mainland. All out conventional war is therefore hardly an option for the Chinese leadership. A choice of a limited border war activating all fronts or simply staging border standoffs with psychological messaging remain among the options but the achievability of these is also heading towards diminishing returns.

Also, it cannot be ignored that failure to achieve military objectives by the PLA will have its impact on its reputation, morale and capability to face situations against greater threats in the Pacific and specifically in the Taiwan situation. By going over the top against India out of sheer short-term frustration, China may actually be painting itself into a corner.

We cannot ignore the immediate circumstances of the last few days which may have irked the Chinese leadership – the Indian decision to ignore all warnings on the conduct of the Indo-US military training venture called Exercise Yudh Abhyas, conducted this time in the Uttarkhand area. This coupled with the G20 hype on India and the spreading general perception that internal cracks are appearing in Xi Jinping’s iron hold over China with streets in turbulence in at least 15 cities, appear to have unnerved the higher echelons in authority. The choice to bring greater effect and convey more focused messaging obviously fell on the Arunachal Pradesh area. The emotive connection there is higher although the PLA should know that similar efforts last year in Yangtse had been effectively neutralized by a robust response from the Indian Army.

Can we expect more to follow? It is my assessment that this could be a one-off event for this winter. Perhaps we give too much capability to the PLA to convert political intent to a set of doable military actions. This is not something easy especially when a restraining hand is placed from the top.

For the moment India should simply continue on its path of developing its comprehensive capacity and capability, modernize and train. A moment of reckoning will come faster than we may appreciate. It’s the minds of our adversaries which need to be targeted and there is no better way to do that than to show our unity and our capability to pursue our interests, with or against the run of play.