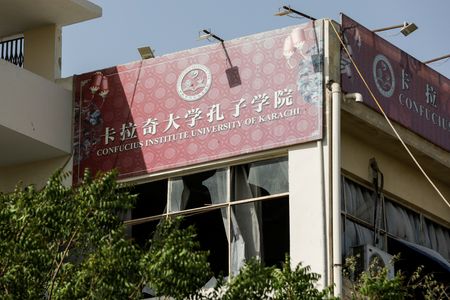 Karachi, May 16 (PTI) Chinese nationals teaching Mandarin in different parts of Pakistan have left for home after being called back by Beijing following the recent deadly attacks targeting them, an official of the Karachi University said on Monday.

Their departure came weeks after a burqa-clad Baloch woman suicide bomber struck a van inside Pakistan’s prestigious University of Karachi, killing three Chinese teachers, including the head of the department, and their local driver, in the latest targeted attack against Chinese citizens in the country’s financial capital.

The banned Balochistan Liberation Army (BLA) linked Majeed Brigade claimed responsibility for the attack on the teachers that took place on April 26 near China-built Confucius Institute – a non-profit institute teaching Chinese language to local pupils – in the university. An official at the University of Karachi said that the Chinese teachers who were teaching at the Confucius Institute on the campus left for home on Sunday. “There were other Chinese teachers working at different campuses in the country and they left yesterday,” he said.

Director of the Confucius Institute at the Karachi University, Dr Nasir Uddin, said that the departure of the Chinese teachers was a big setback for the students learning Mandarin. “We have around 500 students enrolled at the institute and we are now considering having online classes for them so that their term is completed,” he said. He said that the teachers at the different Confucius Institutes in the country have been called back by their government.

Nasir Uddin said that the Confucius Institute is a non-profit educational set-up which aims to teach Mandarin, deepen international understanding of the language, and Chinese culture, and promote people-to-people exchanges between China and Pakistan. The BLA suicide bomb attack on April 26 had killed the head of the institute, Huang Guiping, and two other Chinese teachers, Chen Sai and Ding Mupeng, while their local driver Khalid Nawaz also died in the blast.

The Chinese government in the past reacted strongly to attacks on its nationals working in Pakistan. The BLA opposes Chinese investment in Pakistan, especially in the restive Balochistan, saying local people do not benefit. Balochistan, bordering Iran and Afghanistan, is home to a long-running violent insurgency. Baloch insurgent groups have previously carried out several attacks targeting the USD 60 billion China-Pakistan Economic Corridor (CPEC) projects.

This was not the first time Chinese nationals have been the target of terror attacks in Karachi, which is Pakistan’s biggest city and economic hub. In July last year, masked armed men on a motorcycle opened fire on a vehicle carrying two Chinese nationals in Karachi in which one of them was critically wounded. In the same month, nearly a dozen Chinese engineers were killed when a bus carrying construction workers was “attacked” in northwest Pakistan.

In November 2018, Baloch militants had attacked the Chinese consulate in Karachi but failed to break through the security barrier with three of them killed on the spot. Thousands of Chinese personnel are working in Pakistan on a host of projects being carried out under the aegis of the CPEC.