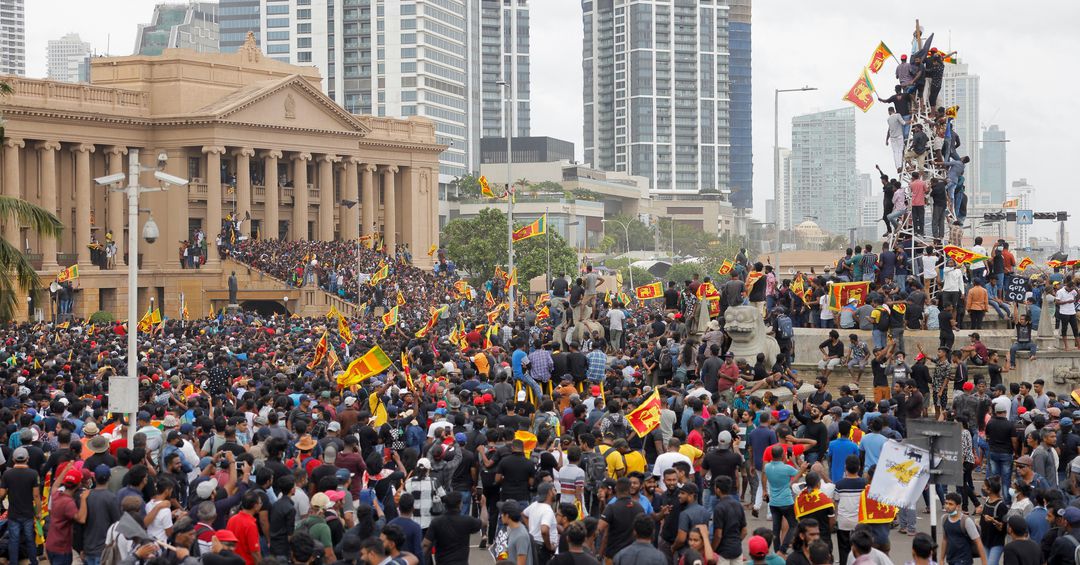 Colombo, Jul 17 (PTI) What started as a small protest by a handful of individuals demanding basic necessities turned into a tsunami that uprooted the once-powerful Rajapaksa family in what was Sri Lanka’s ‘Arab Spring’ moment, but the road to recovery from the country’s worst economic crisis in decades looks distant and painful.

Sri Lanka is facing its worst economic crisis since independence from British rule in 1948, with a severe foreign exchange shortage hampering the import of essentials including food, fuel and medicines. Its foreign debt is over USD 50 billion with repayments this year falling to the tune of USD 7 billion. As the crisis emerged in March, a handful of individuals gathered in a small group holding placards to demand basic necessities like milk powder and a regular power supply.

Within days, Sri Lankans were forced to wait in miles-long queues to get fuel and cooking gas and suffered from multiple hours of power outages. Some 20 people even died while waiting for their turn in the serpentine queues in scorching heat.

Enough was enough for the people having waited each passing day for the government to respond, respond positively. But the Rajapaksa government did not offer any solutions and there was no end to the people’s suffering.

The government declared bankruptcy in mid-April by refusing to honour its international debt. The situation created a thriving black market where people paid to secure a place in the queue and fuel was sold 4 times higher than the legal retail price.

With no end to their sufferings, people across Sri Lanka took to the streets calling for resignations of President Gotabaya Rajapaksa and his elder brother Prime Minister Mahinda Rajapaksa. The Rajapaksas, a powerful dynasty that ruled Sri Lanka for nearly two decades, has been blamed for the country’s economic ruin.

It was the dawn of the ‘Arab Spring’ moment, a series of anti-government protests, uprisings, and armed rebellions that spread across much of the Arab world in the early 2010s. Unfazed by the power that the Rajapaksa family wielded, the people gathered at the Galle Face Green in the heart of Colombo, raising the slogan “GoGotaGama” in a peaceful protest.

These protesters have been at the forefront of the popular ‘Aragalaya’ movement – named after the Sinhalese word for “struggle” – calling for the resignation of President Gotabaya and his elder brother Mahinda. The slogan attracted students, activists, youths and the people from all walks of life, who joined the protest overcoming the deep ethnic and religious divide in the country. Under mounting pressure, President Gotabaya first dropped his older brother Chamal and the eldest nephew Namal from the Cabinet in mid-April.

In May, Prime Minister Mahinda also resigned after his supporters attacked anti-government protesters, triggering violence against the Rajapaksa family loyalists in many parts of the country. Gotabaya tried to tackle the crisis for a few weeks along with the newly-appointed Prime Minister Ranil Wickremesinghe before the President was forced to flee his official residence in the face of massive public protests in July. “We are tired of the situation in the country. They have no solution,” says Ananda Arunajith, a tuk-tuk operator. While he languished in the petrol queue, his wife Sumali waited in the cooking gas line.

Some mothers had to take their toddlers to the queues as they waited overnight to hear the news of stocks arriving. Shehan Perera, an IT industry middle-level executive, says the jobs have come under threat due to the fuel crisis. “The employees now seem to look for running businesses with minimum manpower resources. This has made us work a lot harder to perform and show results,” he says while keeping his car in a long queue in the city.

“Our generation has been almost rendered useless by this fuel crisis. I take a rest break at night in the fuel queue to get the limited fuel supply for my scooty,” says Yohan Perera, a young hospitality industry trainee. He has waited in the queue for over hours many times, only to be told that the pumps had run dry when he was within striking distance of the pumping station. “Who takes responsibility for the deaths of nearly 20 people who have died in the waiting queues? asked Walter Peiris, a retired official. He said his wife was sending food and water to the fuel queue as he waited.

The government has said the situation would get worse before it gets better. “This is sheer incompetence. They just don’t know how to manage the economy,” says Shamal Jayaratne, a self-employed man. He says he closes his motorcycle battery and tyre selling business to join the queue at least three days of the week.

Steven McKenzie, who returned from the Middle East last year, says the fuel situation would have been direr without the Indian Oil Company’s local operation. “The trade unions opposed when the Lanka IOC, a subsidiary of Indian Oil Corporation, was provided oil storage tanks in Trincomalee and given retail pump operation permission. Now you see, it is the IOC which has come to our rescue,” he says. “Since the government can’t handle this, the IOC must be given the entire operation,” he said.

On July 13, President Gotabaya fled to the Maldives before landing in Singapore from where he sent his resignation letter, capping off a chaotic 72 hours in the crisis-hit nation that saw protesters storm many iconic buildings, including the President and the Prime Minister’s residences here. While the public protest campaign organisers feel elated with Gotabaya’s ouster, the light at the end of the tunnel remains distant by all means to those who still suffer in the fuel queues.

Sri Lanka’s Parliament held a special session on Saturday to start the process of electing a new president who will head the next government that has the arduous task to revive the country’s bankrupt economy. The economic crisis that has turned into a political turmoil has deepened concerns that solutions to the economic woes, like the International Monetary Fund assistance, will be delayed.

In June, Prime Minister Wickremesinghe told Parliament that the country’s debt-laden economy had collapsed after months of shortages of food, fuel and electricity. “We are now facing a far more serious situation beyond the mere shortages of fuel, gas, electricity and food. Our economy has completely collapsed. That is the most serious issue before us today, he said.

Wickremesinghe, who is now the interim President, had said that it will take till 2026 to go back to the 2018 level of the economy. “If we make a determined journey along this road map, we can achieve an economic growth rate of negative one by the end of 2023, he said.

On July 5, Wickremesinghe said Sri Lanka’s inflation by the year end would be over 50 per cent and by the end of this year, it will rise to 60 per cent, mainly due to the increase in the prices of goods in the world and the fall in the value of the rupee. On Friday, the World Food Programme said in a situation report that 6.3 million people (28.3 per cent) in the country are food insecure and this is likely to deteriorate as the crisis unfolds.

It is unlikely that the future government would be in a position to provide economic relief in a short span. The process of economic recovery looks distant and painful.