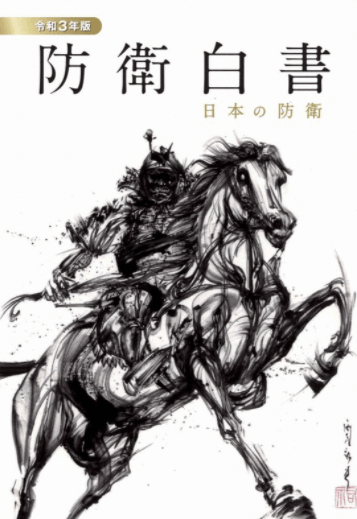 The Defense of Japan 2021[1] (DOJ) White Paper is notable as it shows Japan’s seriousness towards its defense preparedness. The paper is an overview of Japan’s perception of its strategic environment and its challenges, its alliances and its readiness.

DOJ is one of 40 white papers that the Japanese government publishes annually.[2] It is more widely studied because Japan is not a major defense player in the region. DOJ has acquired greater attention due to rising tensions in the Indo-Pacific. It reflects Japanese perspectives on military strategy, operations, and preparedness.

There are some firsts in it.

Its cover design of a Samurai warrior on horseback manifests a more determined approach.[3] In the last two years, the cover pages showed Mount Fuji and cherry blossoms and a view of the earth with a rising sun. Secondly, Japan mentions Taiwan as a separate entity. It takes Taiwan off the China map and discusses it as part of the US-China relations.[4] Taiwan is an important strategic aspect of Japan’s defense policy for the Senkaku Islands and Ryukyus including Okinawa with its US base.

Another aspect is the introduction of climate change as a threat to security. This is linked to a larger issue of natural disasters and the pandemic. Japan Self-Defense Forces (SDF) are supportive of national efforts, the vaccination programme, in alleviating natural disasters and in assimilating airlift capacities domestically.

There is a quiet escalation of the defense budget beyond the 1% of GDP mark. In 2020, defense spending was 0.997% of the GDP. The budget for 2021 shows an increase of 0.5% to 5.34 trillion yen. The intent to cross the 1% of GDP is psychologically important for Japan’s defense capabilities. Defense Minister Kishi Nobuo has indicated this break with the past.[5].

As Japan adapts to rapid changes in the security environment, its anxiety is with China. The contention over the Senkaku Islands, repeated incursions by Chinese boats and Coast Guard (CCG) vessels is worrisome. Japan is even more concerned since, in February 2021, the Coast Guard law of China was amended to allow them greater traction. The ambiguity in the conduct of operations and use of arms in this new law, threatens Japan.[6] CCG intruded for 333 days in 2020 with 1161 vessels in the East Asian Sea.[7]

For Taiwan, the DOJ notes ‘Stabilizing the situation surrounding Taiwan is important for Japan’s security and the stability of the international community. Therefore, there is a need to pay close attention to the situation with a sense of crisis more than ever before’[8].  North Korea is also a major threat. Its nuclear and missile development is undiminished and threatens Japan due to its proximity. The poor state of Japan-South Korea relations is of no help.[9]

The third area of strategic concern is with the Russian expansion of its defense preparedness, collaboration with China over the Northern Pacific and increasing military activity and deployment of newer weaponry in the Northern Territories islands.[10]

The DOJ highlights the close relationship with the USA. The Suga-Biden summit, the 2+2 meetings have strengthened the alliance. The wariness of the Trump era is gone. There is no anxiety from Abe’s sudden exit. The DOJ shows a desire to improve understanding and expand the partnership with greater responsibilities devolving on Japan. The US has clarified that treaty obligations would cover the Senkaku Islands. In turn, Japan indicated that defense of Taiwan from China, is part of their geostrategic outlook. [11]

In Chapter 4 as part of defense procurement plans, the USA plays a big role. Japan is depending on procuring more equipment from the USA, than developing its own. This helps to generate US exports and jobs for the US. F-35, US-2, C-2, PAC-3MSEs, and Type-16 mobile combat vehicles are included for 2021.

In a Special Feature in the DOJ, building a multi-domain defense is set out. More resilient use of space for intelligence and Space Situational Awareness (SSA) is envisaged. Cyber counter measures and other human capabilities will be developed.[12] Capabilities in the Electromagnetic Spectrum Domain and Research on Potentially Game-Changing Technologies are underway.

Lack of a regional security cooperation framework in the Indo-Pacific region and continuing problems of ‘Grey Zone’ activities with impact on territories, sovereignty and economic interests are now more frequent and remain a concern.[13]

Threats from an aggressive China in Southeast Asia are categorically mentioned. China is seen as a power that is trying to alter regional situations in its favour, to the detriment of others. Japan revalidates support for a Free and Open Indo-Pacific (FOIP), which it says is open to all who subscribe to its tenets. This is intended to reassure its ASEAN friends, that FOIP is not anti-Chinese, but becomes so in the absence of China not adhering to international law and norms.

The relationship with ASEAN is important to Japan. Philippines is going ahead with the radar procurements from Mitsubishi industries. Japan has studied the potential requirements of partners and held events for Indonesia, Vietnam, Malaysia and India with large companies. Similarly, Japan is trying to enhance public and private understanding of policy on transfers of defense technology. Webinars for this were held with India in December 2020 and Vietnam in March 2021.[14] Japan remains engaged with ASEAN through the ADMM+ and ASEAN Regional Forum (ARF) too.[15]

For international security cooperation, India remains an important partner along with Australia as mentioned in Part III Chapter 3. The signing of the Acquisition and Cross-Servicing Agreement (ACSA) in September 2020, joint exercises, the meetings held under Quad are mentioned.

The India-Japan relationship could have an element of defense technology transfers, particularly in electronics and joint development programmes for new areas. The supply of defense equipment from Japan’s existing capabilities is lacking so far. Japan’s high costs, restrictive procedures and risk-averse attitude needs to be more flexible to create a partnership based on a strategic value chain model, unique to India and Japan. This could start a new focused collaboration. It could make the partnership more meaningful.

[15] Gurjit Singh, No Sign of a Code of Conduct in the South China Sea, Chanakya Forum, 18 June 2021, https://chanakyaforum.com/no-sign-of-a-code-of-conduct-in-the-south-china-sea/

Jul 30, 2021
Sir, Thanks for the article on Japan, now assuming that Quad role in Indo Pacific South China sea will kick in from economic perspective, India and Japan collaboration especially in defense sector has not been significant. Their were some talks on Shinmaywa US2 and Fifth Generation Aircrafts Technology and advance Submarines but not yet materialized atleast in public domain Cultural, Economic and Militarily engagement must be given a renewed booster shots.

Jul 20, 2021
Japan has to depend on its superior intelligence and strategic planning to contain China. China has huge manpower and infrastructure which overshadows Japan.