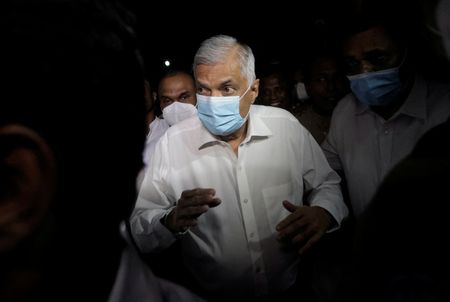 Sri Lanka is currently experiencing its worst economic crisis since gaining independence from Britain in 1948.

“I propose that the loss making Sri Lankan Airlines be privatised,” Wickremesinghe said in his first address to the nation.

“In the 20/21 year alone its loss was 45 billion rupees. By 2021 March 31 its total losses were 372 billion rupees,” the prime minister said while announcing other measures to tackle the problems faced by Sri Lanka’s economy.

“Even if we privatise it we have to bear the loss,” he said. “You should note that this loss has to be borne by the poorest of the poor who has not set foot in an aircraft,” Wickremesinghe said.

Wickremesinghe was unable to privatise SriLanka in an administration he ran from 2015 to 2019.

Launched in 1979, SriLankan Airlnes has a global route network of 126 destinations in 61 countries.

Last month, SriLankan Airlines said it recorded its first profitable fourth quarter (Q4) since 2006 for the financial year that ended on March 31, 2022 with a group net profit of USD 1.7 million despite pandemic challenges.

Sri Lanka is grappling with a devastating economic crisis, with prices of everyday goods soaring, and there have been widespread electricity shortages for weeks. Since March, thousands of anti-government protesters have taken to the streets, demanding that the government resign.

In a pre-dawn operation, the Sri Lankan military had to evacuate Mahinda Rajapaksa hours after he resigned. Mahinda Rajapaksa, the elder brother of President Gotabaya Rajapaksa resigned following clashes between pro- and anti-government protesters. The military were called after protesters twice tried to breach the Prime Minister’s Temple Trees private residence compound overnight.