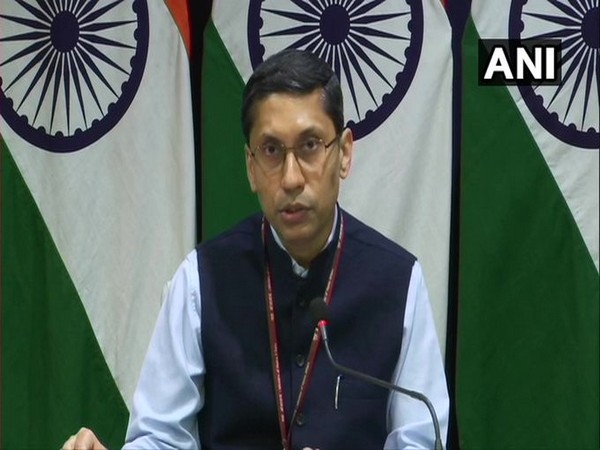 New Delhi [India], June 17 (ANI): India is not convinced with Pakistan National Assembly passing a bill to give the right of appeal to Kulbhushan Jadhav in Pakistani high courts.

India says the bill is full of shortcomings and is a breach of the ICJ judgment.

Ministry of External Affairs spokesperson Arindam Bagchi said at the weekly media briefing on Thursday that the bill does not create machinery to facilitate effective review and reconsideration of the case as mandated by the judgment of the International Court of Justice.

“We have seen the news reports relating to the Review and Reconsideration Bill 2020 that has been passed by the National Assembly of Pakistan. The Bill codifies into law the earlier Ordinance- with all its shortcomings. It does not create a machinery to facilitate effective review and reconsideration of Shri Jadhav’s case, as mandated by the judgement of the International Court of Justice,” Bagchi said.

The ICJ has ruled that Pakistan was in breach of its international obligations because of the failure to provide consular access to Jadhav.

The Pakistan National Assembly last week adopted the Bill to give the right of appeal to Indian prisoner Kulbhushan Jadhav in regard to the International Court of Justice’s (ICJ) ruling.

In 2020, the Pakistan government presented an ordinance in the National Assembly The ‘International Court of Justice Review and Reconsideration Ordinance 2020’.

India has said Pakistan must take appropriate steps to address the shortcomings of the bill.

Bagchi said the ordinance, now the Bill, invites the municipal courts in Pakistan to decide whether or not any prejudice has been caused to Jadhav on account of the failure to provide consular access.

“This is clearly a breach of the basic tenet that municipal courts cannot be the arbiter of whether a State has fulfilled its obligations in international law. Not only this, it further invites the municipal court to sit in appeal, as it were, over the judgement of the International Court of Justice,” he said.

“We call upon Pakistan to take appropriate steps to address shortcomings of the bill and to comply with the judgement of ICJ in letter and spirit,” he added.

India has slammed Pakistan for adopting a “farcical” approach in denying available legal remedies to Kulbhushan Jadhav against his death sentence in contravention of the ICJ order. (ANI)