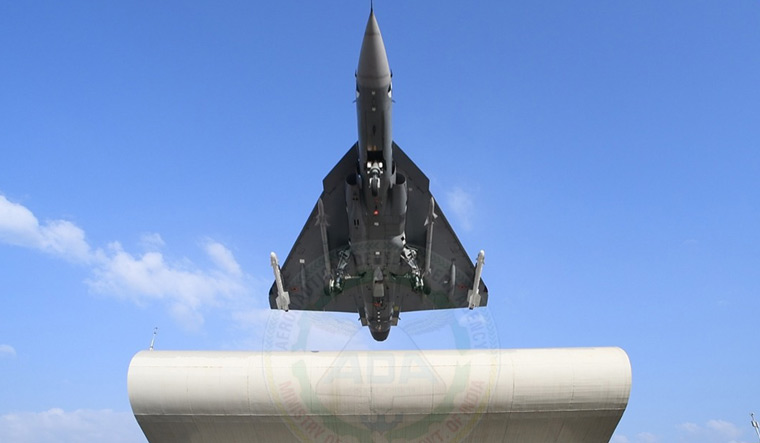 In a reversal of roles, India has offered the United States of America a fighter jet trainer required by its navy for pilot training on aircraft carriers, marking the first major weapons sales pitch by New Delhi to Washington. The Indian offer is for the Undergraduate Jet Training System (UJTS) for which the US Navy has launched a global search.

ET has learnt that India responded to the official Request for Information (RFI) with a Lead in Fighter Trainer (LIFT) version of the indigenous Light Combat Aircraft. The aircraft on offer brings in experience gained by Indian developers from the naval version of the LCA that has successfully demonstrated operations from an aircraft carrier.

While the US is still evaluating the offer, India sent in a detailed project plan, which includes advanced avionics that enable the LIFT LCA to mimic almost all types of fighter jets, from cockpit display layout to control performances.

“We have done all the work in house,” Hindustan Aeronautics Ltd (HAL) chairperson R Madhavan told ET. “The same platform can be used to mimic any other platform. All that needs to be done is put in the flying characteristics and things will change to the selected aircraft. For example, if they Rafale characteristics, to the pilot it will seem like he is flying Rafale, which will help in the advanced training process.”

The aircraft on offer is based on the LCA Mk 1A that is on order by the Indian Air Force and a demonstrator can be produced if the US Navy goes ahead with the selection process and shortlists it for the next step, which is formal request for proposals (RFP).

While India will be going against a clutch of global manufacturers with a history of developing trainers, developers feel there is an even chance for success as an aircraft of the type does not currently exists. In addition, the LCA is one of the few jets in the world that has a demonstrated capability of operating from an aircraft carrier.

As per the US Navy RFI, the LCA meets all basic parameters being asked for, which includes an operational aircraft capable of field carrier landing practice and carrier touch and go events. The naval version of the LCA has been tested extensively on both at the shore-based testing facility in Goa as well as the INS Vikramaditya.

With the LIFT version of LCA expected to meet both domestic and worldwide demands, plans are underway to produce a demonstrator aircraft along with the upcoming order for 83 LCA Mk 1 as that is being placed by the air force and is expected to be signed this financial year.

The US has been a significant exporter of military equipment to India, ranging from transport aircraft to artillery guns and attack helicopters. There has been a strong pitch by US arms manufacturers to gather a bigger slice of the India market, with offers in place for new fighter jets, unmanned combat aerial vehicles and air defence systems among others.