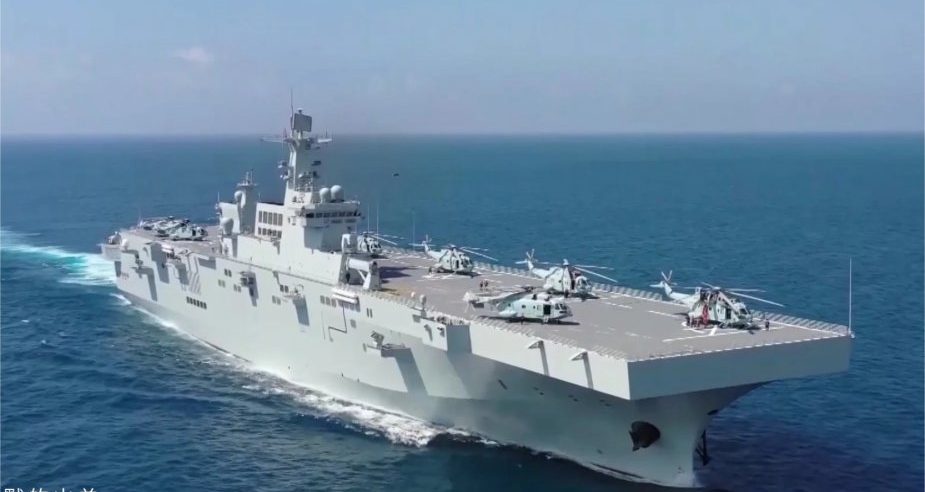 China is involved in various disputes with neighbors – including India, Japan, the Philippines and Vietnam – but none approach the degree of danger faced by the democratic nation of Taiwan. China militarily threatens Taiwan through means such as ballistic missiles or amphibious invasion, but would it have sufficient shipping to achieve an amphibious lodgment?

The likes of a D-Day landing are unlikely ever to be repeated, when nearly 7,000 Allied vessels (including 1,213 combat ships, 4,126 landing ships, 736 ancillary ships and 864 merchant vessels) supported landings in Normandy beginning 6 June 1944. Indeed, conducting an amphibious assault in this day and age is surrounded by heavy risk, considering the advancement in weapons such as anti-ship missiles.

The topic of whether China is readying to invade Taiwan has been generating significant heat and light over the past year or so. Of course, for the People’s Liberation Army (PLA) to invade and conquer Taiwan would involve major loss of ships, equipment and lives. Nonetheless, China under Chairman Xi Jinping has been ramping up its ability to project power by sea, including its amphibious assault capability. Thus, the PLA Navy (PLAN) has already inducted the first of multiple 40,000-ton Type 075 landing helicopter dock (LHD) ships, with a second due to enter service imminently. The Type 075 is a flat-top vessel able to carry numerous helicopters, as well as possessing a well deck that can be flooded to allow landing craft, hovercraft and amphibious assault vehicles to disembark.

A fleet of Type 075 LHDs will complement existing Type 071 landing platform dock (LPD) ships, which have a well deck but reduced capacity to carry helicopters compared to an LHD. China has eight LPDs in service. Despite these capital ships plus other smaller Chinese landing ships, they are insufficient to lift the necessary materiel and soldiers to successfully invade Taiwan. Indeed, in a recent article for The Jamestown Foundation, Conor Kennedy – an instructor at the China Maritime Studies Institute of the US Naval War College – highlighted, “Among the numerous critical components necessary for a successful cross-Strait landing, a failure to secure landing areas for follow-on forces in the initial assault would bring the entire endeavor to a screeching halt, likely inflicting severe costs on the part of the aggressor and resulting in a withdrawal.”

The US Department of Defense’s 2020 China Military Power Report noted that the PLA’s focus on ocean-going amphibious platforms, rather than a large fleet of traditional landing ships and craft, suggested that a direct beach-assault operation is less likely at the moment. On the other hand, though, China is still capable of capturing one or more of Taiwan’s small offshore islands by amphibious assault.

However, what if China has other ways of moving troops across the Taiwan Strait, a notoriously rough patch of sea, than by only naval vessels? Thomas H. Shugart, Adjunct Senior Fellow, Defense Program at the Center for a New American Security, pondered, “Will China close its gap in sealift capacity? While some may take comfort that China may appear to lack sufficient amphibious lift to conduct a cross-Strait invasion, for example, this is not a factor upon which our allies’ and partners’ defense should rest, as China may be able to close this gap faster than may be commonly understood.”

The above is what Shugart said in testimony before the US Senate Foreign Relations Committee on 17 March 2021. He continued, “…While recent commentary has documented the growing level of integration, as part of China’s military-civil fusion effort, between Chinese civilian industry and the PLA, some may not appreciate the scale and pace of such integration or of the improvements in relevant Chinese merchant fleet capabilities in recent years.”

Indeed, commercial shipping, much of it designed from the start for military operations, “could contribute significantly to China’s overall sealift capacity, in a manner not normally accounted for by assessments of the PLA Navy’s amphibious fleet,” Shugart pointed out. “…We must consider that given the scale of its [China’s] status as the world’s largest shipbuilder, as well as the fact that its prime shipyards are dual-purpose producers of civilian and military vessels, China may be able to build sealift capacity fast enough that we may already be within the window of strategic surprise with respect to China’s capability to conduct a successful invasion. That is, China may be able to increase its sealift capacity, one of the last missing pieces in its ability to invade and coerce its neighbors, faster than the US and its allies may be able to make strategic changes in response, given the typical pace of change within our democratic systems.”

China would well be able to utilize commercial shipping such as roll-on/roll-off (Ro-Ro) ferries. The Bohai Ferry Group, the major ferry operator in the Bohai Gulf, for example, operates eleven Ro-Ro ferries. These actually form the Eighth Transport Dadui of the strategic projection support ship fleet. Each vessel displaces around 20,000 tons and can carry 200 vehicles plus 1,280 passengers. Bohai also operates larger 35,000-ton ferries able to carry 300 vehicles and 2,038 passengers.

Of its commercial fleet, the group constructed seven large Ro-Ro specifically to national defense specifications, allowing them to be commandeered for military operations. These ferries have been used more than 40 times in military exercises to date. Indeed, the Bohai Ferry Group’s capacity to move vehicles has multiplied 100 times over the past 20 years. By way of example, it appeared a mobilization and amphibious exercise was held off the coast of Guangdong Province in mid-July, involving the 2nd Combined Arms Brigade of the 71st Group Army, as well as the 6th Brigade of the PLAN Marine Corps (PLANMC).

They were using two large vessels plus other cargo vessels near Rizhao port, southwest of Hong Kong, where there are sandy beaches of an amphibious training area. Shugart claimed these Ro-Ro ferries (the 33,000-ton Bo Hai Ma Zhu and 16,000-ton Hu Lu Dao, would normally be plying waters 1,000 miles away in the Yellow Sea. He concluded, “My guess: the PLA’s efforts to integrate China’s world-class merchant marine into its amphibious assault forces continue. If successful, this could potentially increase its cross-Strait Taiwan sealift capacity immensely, removing one of the major obstacles to invasion of Taiwan.”

The American also noted rather ominously: “…We would be wise to assume that China will bring all of its tools of maritime power to bear in ensuring success in a regional conflict, including the use of the China Coast Guard, the world’s largest such force; and its fishing fleet, specifically in the form of the People’s Armed Forces Maritime Militia (PAFMM). In something like the form of a reverse-Dunkirk, we should expect that instead of only dealing with dozens of gray-painted PLA Navy amphibious vessels and their escorts, we would likely see an effort supported by many hundreds of fishing boats, merchant ships and Coast Guard and Maritime Safety Administration vessels.”

PAFMM vessels are already known to use radar reflectors and other tools to modify their radar signatures, so that they appear larger than they really are. In other words, in a conflict, smaller fishing boats could act as decoys, sacrificing themselves as targets for limited numbers of enemy anti-ship missiles so that larger PLAN vessels can survive. Ro-Ro ferries in general have built-in ramps that enable vehicles to load and unload. However, these require a port, for they cannot disembark amphibious assault forces at sea. What is needed for merchant vessels, then, are ramps that would allow the launching of amphibious vehicles or the transfer of equipment to landing craft at sea.

Significantly, that is precisely what China is developing, and which may even have entered into service. Kennedy, in his research for The Jamestown Foundation, discovered that this capability was publicly demonstrated in July 2020 by the 15,560-ton Ro-Ro vessel Bang Chui Dao. The ferry belongs to COSCO Shipping Ferry, and the Dutch-built ship was used by the 1st Marine Brigade of the PLANMC in a four-day landing exercise off Guangdong’s coast. Bang Chui Dao embarked troops, trucks and Type 05 tracked assault vehicles at the loading dock of the 6th Landing Ship Flotilla in Zhangjiang. Digital tracking data indicates it began launching vehicles 4-5km offshore of Tangxia whilst steaming slowly at half a knot.

Kennedy highlighted: “The key technical development demonstrated in its July 2020 exercise with the PLANMC is the converted stern ramp installed on the Bang Chui Dao. The ship’s previous straight stern ramp was a hydraulic-powered ramp type often seen on Ro-Ros. At some point in the past few years, this vessel’s stern ramp was converted to enable amphibious launch.” It can also recover amphibious vehicles the same way.” The new ramp is driven by two large hydraulic cylinders and two support arms that enable it to withstand sea action. A flap strengthens the outer ramp and assists vehicles embarking from the sea, sufficiently strong to handle a 26-ton ZTD-05 vehicle.

Bang Chui Dao was not constructed to the more exacting Chinese national defense requirements that now exist, but it was obviously modified. It has 835 meter lanes available to accommodate vehicles, plus it can carry 1,200 passengers. This would be sufficient to carry a PLA mechanized infantry battalion. Kennedy noted, “The use of ramps at sea is fraught with challenges … The introduction of this system suggests confidence by Chinese engineers and the vessel’s operators that their system can work. The combined use of hydraulic systems and support arms means that this new ramp is better situated to handle light sea states, perhaps up to Sea State 3.”

However, conditions in the Taiwan Strait can be harsh, with average swells of 3.6 feet to 8.5 feet. This ramp might only have been undergoing testing, since it has only been seen on Bang Chui Dao so far. It is unknown how reliable it is, but it could presumably be installed on other merchant vessels. Kennedy again: “In 2019, authors from the PLA Military Transportation University stated that there were 63 Ro-Ro ships suitable for use in transporting military units, totaling 140,000 deadweight tons. While larger, more advanced Ro-Ro ships have been delivered, numerous existing ships still use straight stern ramps like the Bang Chui Dao Many of these might be good candidates for ramp conversion.” Observers might expect a sudden surge in naval landing ship construction before any serious preparations for an invasion of Taiwan. However, the adaptation and employment of regular commercial vessels could give the PLA a huge element of surprise.

Kennedy wrote: “The testing of new ramp systems as seen on the Bang Chui Dao could offer the PLA a potentially fast and cheap method of surging amphibious lift capabilities without raising concerns. This middle ground scenario raises questions about how quickly such conversions could be detected. Converted Ro-Ro ships could also be loaded with amphibious combat units well ahead of a planned invasion, supporting personnel with shipboard amenities normally used for civilian purposes. This could help ease pressure on mobilization, embarkation and movement timelines, and could be done at optimal periods, such as nights with low visibility or days with ample cloud cover.”

Kennedy concluded, “If it is adopted on a larger scale, the PLA would only need as many converted Ro-Ros as necessary to fill in the gaps in amphibious lift for surface amphibious assault units. Other larger Ro-Ro ships could focus on the transport and debarkation of follow-on forces, another uniquely difficult challenge in amphibious assault scenarios…”