Eurasia Flare Up – Russian Distraction Or a Lurking World War ? 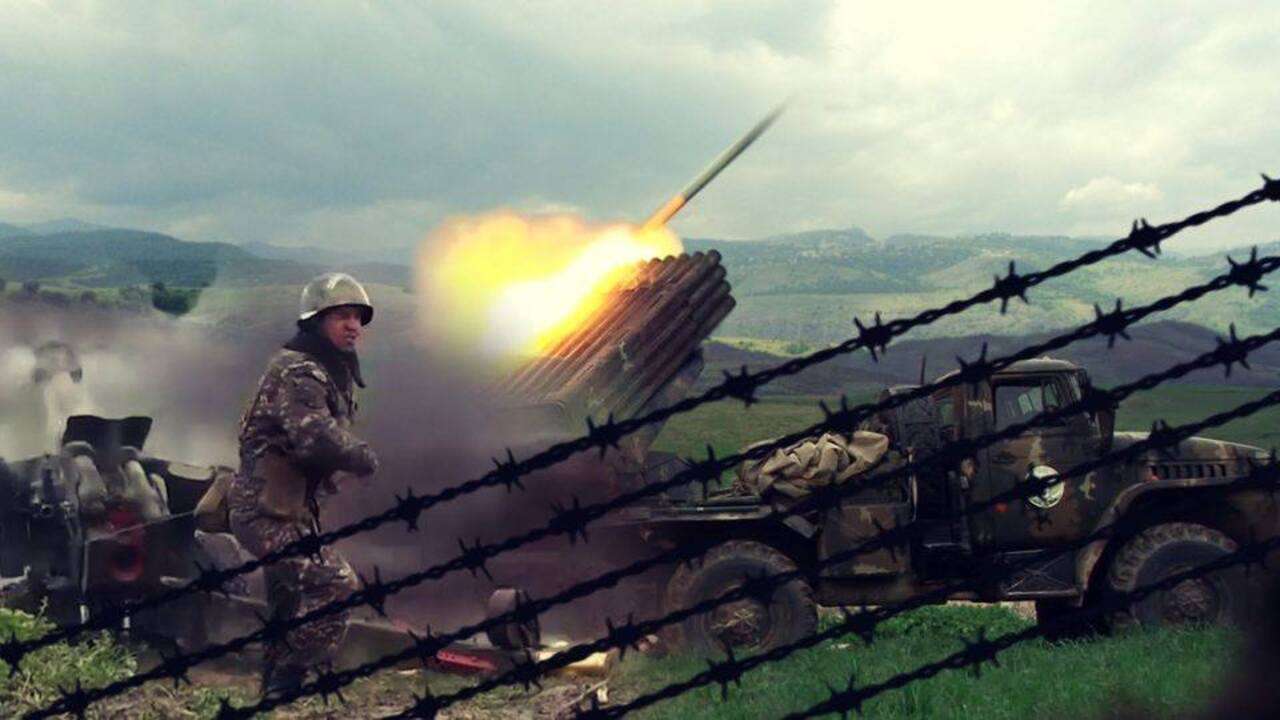 History has taught us that the nation which cannot manage its resources is bound to fail. The number of countries which are presently at logger heads with each other across the world include Armenia-Azerbaijan, Tajikistan- Kyrgyzstan, Greece-Turkey, Russia-Ukraine, China-Taiwan and the age-old enemies Iran-Israel. All of them share the same bone of contention-resource sharing or energy crisis, which in turn hurts the business and ergo the economy. Will this flare up in Eurasia eventually lead to another World War? Or is this just a plot to distract Russia?

From Germany and France in Europe to the remotest corner of Central Asia, are bound to face a severe energy crisis in the coming winter season. Russia has halted the gas supplies to European countries via Nord Stream, and the pipeline has been shut down with no further notification on its opening. 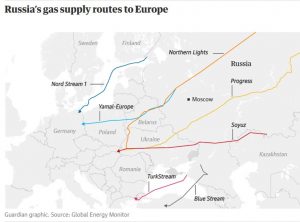 Adding fuel to this fire was Russian Energy minister’s statement that Russia will replace Nord Stream-2 to Europe with Asian Force Siberia 2 pipeline to China. Nord stream-2 is a new pipeline to Europe which Germany has refused to open due to the ongoing Ruso-Ukro war. But Russia has found an alternative way of selling its gas. China, its new customer, will host a part of the Force Siberia 2 which has a capacity of 50 billion cubic metres of gas per year, and which will be laid through Serbia and Mongolia. On 16 September, the two sides also signed agreements to build a new transit route from Vladivostok in Russia’s Far East to northern China, on the sidelines of SCO meeting in Samarkand, Uzbekistan. This will facilitate Russia in selling additional 10 billion cubic metres of gas to China. Thus, creating a gas network from Russia, which can supply 65 billion cubic metres to China.  Au contraire, Europe’s Nord stream-2’s maximum capacity is 55 billion cubic metres of gas per year.

Russia is sanguine that it will soon make up for the losses it incurred in Europe. Construction of Force Siberia 2 will start in 2024. 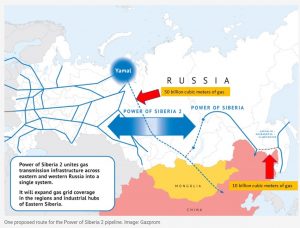 The minor skirmishes to the mighty flare ups! 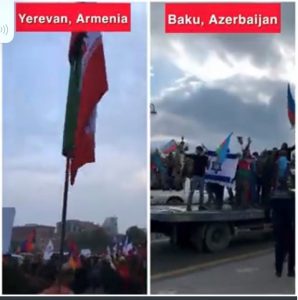 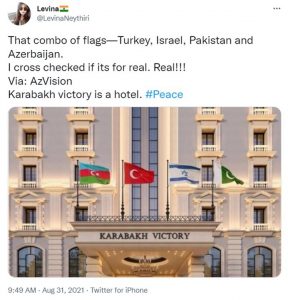 It is flustering for a lot of people to see Iran support Armenia. The reason is simple: military ties and business.

Azerbaijan imported 69% of its arms from Israel while Israel depends on Azerbaijan for petroleum imports. For Iran, the reason to support Armenia is not just their historic ties but also the fact that the Armenia-Iran border is the only land border between the Eurasian Economic Union (EEU) and Iran. If things go smoothly, then Iran plans to sign a free-trade agreement with EEU. This is why Iran has to meddle in Armenia and Azerbaijan’s issues.

In 2020, Armenia had lost its war against Azerbaijan and with it the control over Nagorno-Karabakh region. On 12 September 2022, a series of clashes erupted between the two countries again and within a few days Armenia lost 115 soldiers while Azerbaijan lost 71 soldiers.

On September 16th when SCO (Shanghai Corporation organization) meeting was being held in Samarkand, Uzbekistan, two of its neighbors and also SCO members—Tajikistan and Kyrgyzstan, had locked horns with each other. 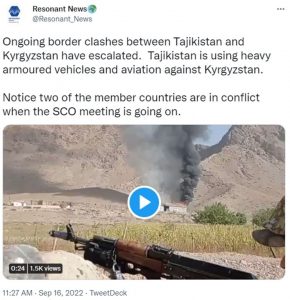 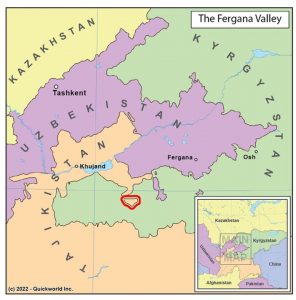 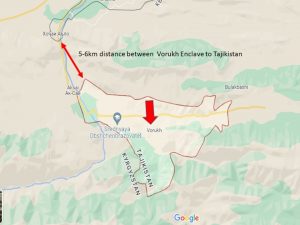 The reason for escalation in this case is water. Vorukh is an enclave which is surrounded by Kyrgyzstan but belongs to Tajikistan which is 5 km away from the nearest border of Vorukh. Tajikistan claims Kyrgyzstan has been arm twisting it for water especially in the Vorukh region. Adding to Kyrgyzstan’s misery is poor rainfall and low water level in its dams. Kyrgyzstan and Tajikistan’s high-mountain glacier-fed rivers are significant not just for generating electricity for themselves but also for irrigating swathes of semi-arid lowland Kazakhstan, Uzbekistan, and Turkmenistan. Gist is—if these two countries land in an energy crisis, then it comes with serious repercussions for other countries in Central Asia.

Trivia: Tajikistan has Russian and India’s Military bases. Russia has currently transferred some manpower from Tajikistan to its border with Ukraine.

One of the main reasons why Russia attacked Ukraine was to get control over the breadbasket of Europe and to keep NATO away from Ukraine. Eastern part of Ukraine is the richest part of the country and most of its population is ostensibly pro-Russia. Control over this region, would mean controlling the grain supply to the world. Biolab and American interference in Ukraine through NATO were the other reasons which provoked Russia into a war. An in-depth article on this issue was written by the author in the article – The war of mercenaries. 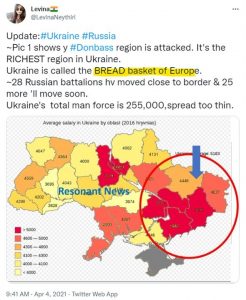 A Ploy to Distract Russia?

The energy crisis is bound to exacerbate as winters arrive. Not just the European countries but countries located far away in Africa have also been bearing the brunt of Ruso-Ukro war. The only way to weaken Russia at this point is – by weakening its allies. A month before Russia attacked Ukraine, there was a massive uprising in Kazakhstan which threatened to push the country into a civil war like situation. Kazakhstan had blamed MI6 (Britain’s external spy agency) for its internal turmoil. Putin acted pronto, sent in soldiers of CSTO (Collective Security Treaty Organization) to Kazakhstan, who doused the fire of uprising in four days. CSTO is made up of six post-Soviet countries: Armenia, Belarus, Kazakhstan, Kyrgyzstan, Russia, and Tajikistan. One look at the name reinforces that it’s more than a coincidence that most of these countries are embroiled in internal and external conflict presently.

Meanwhile in Serbia, which is another ally of Russia, NATO has threatened it will increase its peacekeeping force in Serbia’s neighbourhood Kosovo if there is an escalation of tensions.

According to statistics about 8 million people from different central Asian countries work in Russia. Ergo, the plummeting economy of Russia may leave millions of Central Asians inside Russia unemployed, hammering remittance flows back to their countries.

The Russia-Ukraine war has also forced the supply chains through Russia to move closer to China and Turkey. It’s evident that the war Russia is waging has financial and strategic repercussions for the Ex-Soviet states. But could this escalate to a World War III?

Few believe we are already in the shadow of WWIII with the pandemic hitting world economy at its core in 2020.

On Russian side, Armenia, Azerbaijan, Tajikistan, Kyrgyzstan, Serbia, Iran and China are either facing problem at their borders or are struggling with energy crisis. On American side – its biggest NATO allies like UK, Germany and France are facing economic slowdown, while countries like Taiwan, Greece & Turkey are ready to plunge into a war. The chaos is real!

One tiny spark can burn down the houses on both sides.