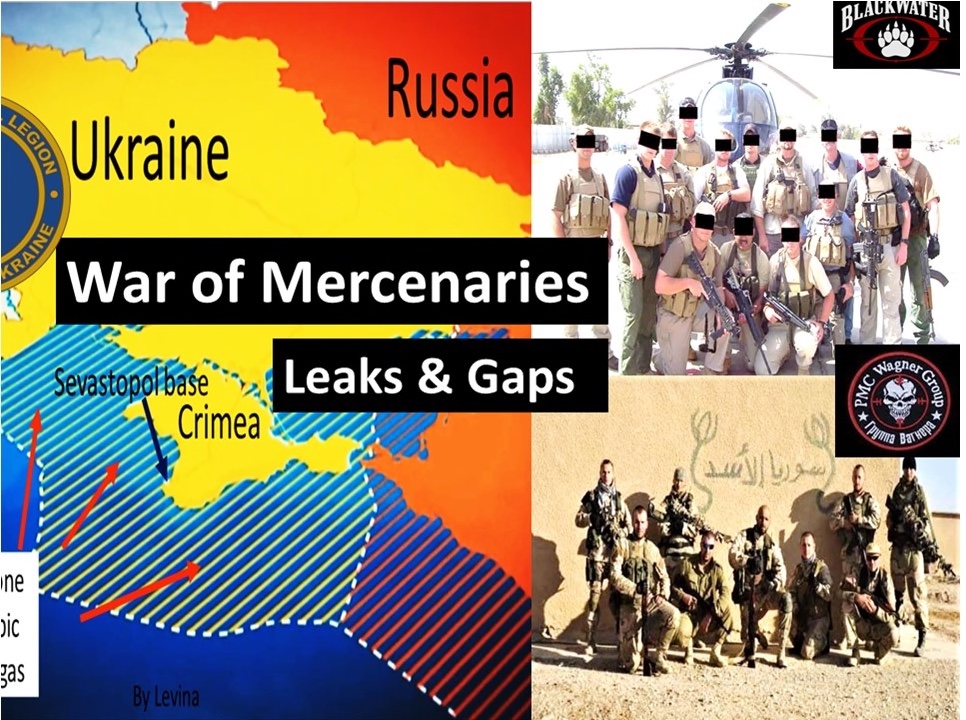 On 10th of March, Britain’s Ministry of Defence released an intelligence update, which said—Russia is deploying Private Military Companies (PMCs) in Ukraine.  Interestingly just a week before this announcement Russia’s Defence ministry spokesperson had made a similar statement which said– US military intelligence has launched a large-scale campaign to recruit contract soldiers from Private Military Companies (PMC) to be sent to Ukraine. The gist is—the war is about to get messier in Ukraine as there’s a very thin line between PMCs and mercenaries. 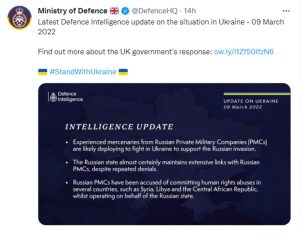 Like CIA director says—next few weeks will be ugly.

The War In The Making

As early as April 2021, Russian Army had moved approximately 150,000 troops to it’s border with Ukraine. The convoys on the move were spotted with S-300s, bridge sections and lots of fuel, reinforcing that they were headed to the border for a long haul.

This news had created a few ripples back then, but died soon after, as Eastern part of Ukraine has remained a warzone since 2014.

Albeit everyone knew sooner, or later Ukraine will have to face the wrath of Russia, as Ukraine’s bonhomie with NATO was definitely not acceptable to Russia.

Since the day America reneged from its promise made in 1990’s that it will not expand NATO to Russia’s neighbourhood, yet took the Baltic states of Estonia, Latvia and Lithuania under its umbrella, a storm was brewing in the region. Ukraine being the closest to Russia’s border had to be, by default, the first to receive the blow for irking Russia.

Of course there were other reasons for Russia to attack Ukraine, like 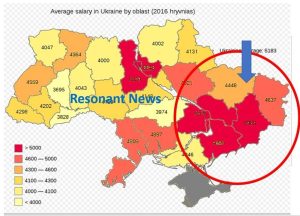 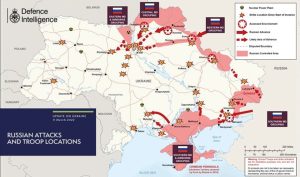 An updated map of Ukraine conflict as per Defence Ministry, UK, clearly showing the ports being taken over by Russian Army to turn Ukraine into a landlocked country. 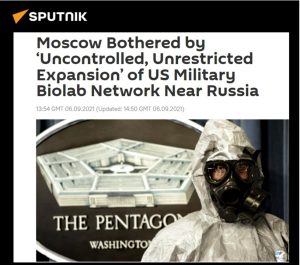 War of Mercenaries— Europe’s Syria in the Making

What are PMCs? By definition–Private Military Companies (PMCs) are businesses that offer specialized services during war and conflict, they provide armed combat or security services for financial gain. PMCs have been around since World War II, and today there are 150 PMCs in 50 countries across the world. Biggest advantage of using PMCs is—governments neither have to worry about the number of soldiers losing lives at the battlefield, as death of PMCs are not counted, nor do they have to worry about paying PMCs with pensions and health insurances. War in Iraq saw largest deployment of PMCs—60 companies and 20,000 PMCs were officially involved.

An American PMC, Blackwaters, gained notoriety in 2007 when the news of killing of 14 civilians by Blackwaters came to fore. Since then, Blackwaters has been renamed as Academi. Interestingly, Russia has been claiming since 2015 that Blackwater has been training Ukrainians in Ukraine, which Russia says is a militia.

In 2014, Russia had annexed Crimea, after the Euromaidan protests which spread like wildfire in Ukraine, tumbling the pro-Russia government out of power. The annexation took place 2 years after a research claimed that economic free zone of Crimea had up to 2 trillion cubic meters of natural gas. Also, Crimea had a Russian naval base, which was given on lease to Russia by Ukraine after USSR had collapsed. Unlike other ports in Russia, Sevastopol port doesn’t freeze in winters, and gives Russia a direct access to black sea, ergo making it a vital port.

Just like America, Russia too maintains PMCs; one of the most famous of them being Wagner group, which came into existence in 2014, in the Luhansk region of Ukraine, which has now been declared an independent region by Russia. It is believed Wagner group is run by one of Putin’s friend Dmitry Utkin, a Chechen war veteran. 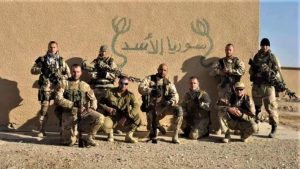 The problem of PMCs becomes a behemoth one to handle when more than two PMCs get involved. In Ukraine’s case, mercenaries from different parts of the world have arrived to fight both pro-Ukraine and anti- Ukraine. Within 4 days after the commencement of Russian attack on Ukraine, on 27th February, Ukrainian embassy across the world had begun inducting people of different nationalities to fight against Russia, in what it calls the Ukrainian legion.

By 4th of March, Ukrainian President Zelensky had announced that 16,000 “fighters” of different nationalities will be joining the Ukrainian forces to fight against Russian forces. Ukrainian embassy in US reported that they received 3000 email requests to join the legion, while 500 people from India had volunteered for the same, albeit so far only one Indian has joined. Same is true for Pakistan.

Another group which has been known for its brutal ways of carrying out their missions have also reached Ukraine— the Kadyrovites .

This is a Chechen special force, which was photographed praying in a jungle, while on their way to Ukraine. Kadyrovites, had emerged in Chechnya as a separatist militia in 1994 but later defected to Russian side in 1999. It is now a paramilitary organization, which western media claims has been sent to Ukraine to head hunt the officials. 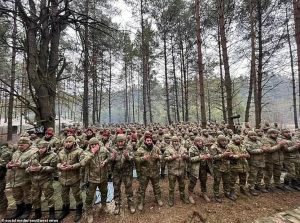 Kadyrovites of Chechnya praying in a jungle as they head to Ukraine, pic credit: dailymail.co.uk

Most of the PMCs working in the war zone get paid well. Given below is a job vacancy posted at silentprofessionals.org. The wage is as high as $2000 per day + bonus. 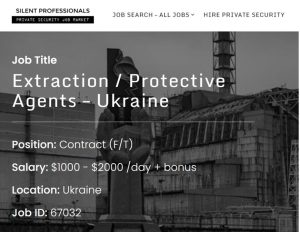 Some of the PMCs are actively involved in rescuing people out of Ukraine, and such operations are called extraction missions. But only the rich can afford their way out of Ukraine as the charges for an individual to be rescued by PMC is $30,000.  Whilst a family with kids and old people, who can slow down such extraction missions, can be charged as high as $6 million.

So, it’s all a money game; whoever pays higher amount can avail a PMC’s services.

This is reminiscent of Syria and Libya.

So is Ukraine Europe’s Syria in-the-making?  With PMCs increasing their footprint in Ukraine, the war may now wage on for years to come.

The trigger for Russia’s movement in 2021 –in all likelihood– would have been Joe Biden’s win. As reports suggest Russia had begun its troop movement in Spring of 2021 (March -April), immediately after Joe Biden took over as President of the US.

Zelensky, the Ukrainian President, was considered close to Joe Biden, who throughout his political career has had an anti-Russia stance.

Former President Donald Trump had a milder approach towards Russia and wanted to mend the ties. But “the 2020 Trump-Zelensky leak” created a pandemonium. Ostensibly, Trump had asked Zelensky to investigate Joe Biden, his son and a company called Crowdstrike.

As Vox quote’s the incident—”Trump asked for confusing favor from Zelensky related to a cybersecurity firm, a billionaire, and a computer server — but its subtext seems to be that Trump wanted help uncovering evidence that he believes would indicate that Russia was framed for hacking the Democratic National Committee (DNC) in 2016.”

Trump ostensibly believed that the cyber attempts to manipulate American voters were carried out from Ukraine and not Russia.

Interestingly, Trump had in 2016 blamed Ukraine (and not Russia) for interference in elections. In 2019, Trump had cancelled his trip to Ukraine, and had also cancelled a $400 million military aid to Ukraine when Zelensky did not cooperate.

This should explain many things including — Zelensky’s initial hubris and belief that President Biden would help him. After all, Zelensky had done Biden a favour by pulling him out of a rut in latter’s tough time. 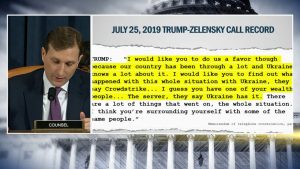 A Secret Airfield and the Suwalki Gap

According to a recent report 70 British SAS soldiers and 150 US Navy seals are training with Ukrainian soldiers in Lithuania for a mission to rescue Ukrainian President, if he requests for it. Lithuania is Belarus’s neighbour, and a NATO member, ideally the training cannot be objected by Russia. But there’s a problem—Russia can block the Suwalki Gap.

Suwalki Gap is a small piece of land which lies between Poland and Lithuania, also Belarus and Russia’s Kaliningrad.

This is the only way to get by road or rail from Poland and Central Europe to the Baltic states (Lithuania, Latvia and Estonia)—which many experts consider as NATO’s most exposed members.

Russia has raised concerns over weapon and ammunition supply to a “secret airfield” in Eastern Ukraine. America has itself confessed that “ US and other NATO members have so far sent Ukraine 17,000 anti-tank missiles and 2,000 stinger anti-aircraft missiles”. The secret airfield saw as many as 17 aircrafts land on daily basis. But this was revealed only after vast majority $350 million US security assistance package had already been delivered to Ukraine.

US now fears these flights may now come under attack from Russia. As expected, Russia has now issued warning against convoys supplying arms to Ukraine and said that such convoys are “legitimate targets” for the Russian Armed forces. NATO is now figuring out new ways to “help” Ukraine… or so NATO believes.

It took Zelensky a war and 549 deaths, to comprehend that neither Biden nor NATO will come to his rescue. In one of his latest statements, Zelensky said that he wants Israel to convene peace talks with Russia, in Jerusalem. In all likelihood, he is buying time so that the legion grows bigger to fight against Russian forces.

The billion-dollar question is — Will Zelensky let Ukraine fall to mercenaries? A standup comedian by profession, the President of Ukraine, probably doesn’t realise his war zone live TV shows may earn him claps of western countries now, but history will not spare him for jeopardizing lives of people in myriads of countries.

Mar 13, 2022
This is a very detailed and informative write-up. Levine always gets into the depth of unknown what no one notices or thinks about. Bravo!

Mar 13, 2022
Very well explained and one csn see the dirty games of US. It seems US is only interested in selling arms and creating rift. If Ukraine is smart it will negotiate with Russia and get itself out of this hole it dug.