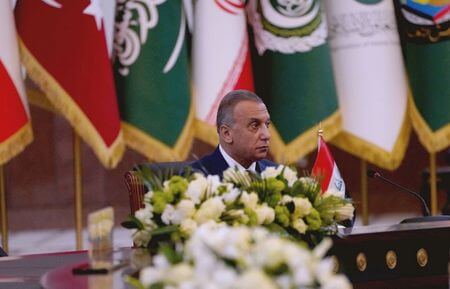 For fairly long the attention of the world has been focused on Afghanistan and the various shenanigans related to the Taliban 2.0. A presumption seemed to prevail that all was quiet in the Middle East. With the US drawing down its forward presence, relative attention and preparation for its shift of focus to the Indo Pacific as the new theatre of concern appeared.

In the midst of this, over the last four weeks attention has been taken up by the election in Iraq in which the forces backed by Iran based militia groups have lost seats and hence potentially their influence in Iraq. The election was held months ahead of schedule in response to mass protests in late 2019, which saw tens of thousands in Baghdad and in predominantly Shia southern provinces rally against endemic corruption, poor services and unemployment.

Muqtada al-Sadr, the 48 year old nationalist Shia cleric with Iraqi roots and a not so pro-Iran orientation has won 73 seats out of 329 declared in the election of 10 Oct 2021. This is 20 more than the number he held in the previous assembly. His influence is therefore likely to increase as the Prime Minister will in all probability be of his choice as he seeks other parties to put together the strength to run a coalition government.

The political movement of Muqtada al-Sadr has quietly come to dominate the apparatus of the Iraqi state and his influence is increasing. The militias have lost popularity since the 2018 vote, when they made big election gains. Many Iraqis hold them responsible for suppressing the 2019 protests, and for challenging the state’s authority.

The Iran backed Iraqi militias which have seen their numbers dwindle in the recent election are obviously not too happy and are alleging malpractices in the election. The US and other western powers were apparently quite satisfied with the 10 Oct 2021 election. It has led to a situation whereby the high security Green Zone of Baghdad, the most secure area where foreign embassies and government buildings exist, being surrounded by protesting members of the groups supported by Iran backed Iraqi militia groups.

Prime Minister Mustafa Al Khadimi, an ex-Intelligence Chief, personally passed directions forbidding any firing on protestors. He knows fully well that this would spark intra Shiaite tensions and lead to a return to the chaotic days witnessed when the Iran backed Iraqi militias were attempting to establish their hold post the confrontation against the Islamic State (IS) just three years ago.

Prime Minister Khadimi had returned from the protest sites on 7 Nov 2021 when a small drone with an explosive payload exploded over his residence injuring seven guards and other officials. There were two more drones used for the same mission but these were shot down before they could do any damage.  The Prime Minister was not injured and no one has claimed responsibility although the event is being considered as a clear act of terror. The situation is awkwardly stable with the Iraqi Armed Forces and the Iran backed Iraqi militias in a virtual stand off and any further triggers could lead to unbridled violence in the heart of the capital city. How this affects the environment in the rest of Iraq and perhaps even other parts of the Middle East can be extremely unpredictable.

Why is all this happening, is worthwhile examining. Behind almost all the turbulence in Iraq is a set of complex politics which has made it the playground of the intra Shia world attempting to seek influence. The Shia are not a monolith; they too are a house divided although they form a 68 percent majority in Iraq. The Iraqi Shia were a subjugated lot under Saddam Hussain and after his overthrow have been in an awkward relationship with Iran which has always considered itself the controller of Shia destiny.

After the 1979 Iranian Revolution, Iran vigorously assumed the mantle of Shia leadership in an effort to create what is now called the ‘Shia Crescent’. After Iran the largest segment of Shias reside in Iraq (15-16 million), although this is much smaller in number than the Shia population of India and also that of Pakistan respectively.

There are two important personalities in Shia ideological politics in Iraq, Muqtada Al Sadr and Ayatollah Sistani. The latter, now almost 94 years old, was instrumental in inviting Iranian sponsorship of Shia militias to fight the Islamic State (IS) when the latter was at the height of its power in Iraq and Syria. After defeating and displacing the IS the Shia militias became a permanent part of the security landscape of Iraq. Among them are the Popular Mobilization Force (PMF) or Hashd al Shabi and the Kataib Hizbollah.  Iran has also been using these groups against US interests in Iraq. The attack on the US Embassy on 31 Dec 2019 was carried out by the PMF although the Americans retaliated against both PMF and the Kataib Hizbollah.

Under Iranian influence these forces have also been demanding a full withdrawal of the approximately 5000 US troops who are still deployed in Iraq. The militias lost some popularity since the 2018 vote, when they made big election gains. Many hold them responsible for suppressing the 2019 protests, and for challenging the state’s authority. The 2021 election appears to confirm that the nationalist forces in support of Muqtada Al Sadr have regained greater influence.

Muqtada Al Sadr, who famously raised the Mahdi Army in 2003 to contest the presence of the US troops after the overthrow of Saddam Hussain is a well-known figure in Iraq and internationally. At one time he was a prominent target of the US Forces who were ultimately advised against assassinating him lest Iraq erupt in uncontrollable turmoil. Sadr appears to have changed his overall outlook. He has softened his stance towards the US although he is yet looked upon as an unlikely US ally. He has realized that the Iranian influence, if allowed to grow the way it did during the height of the IS crisis three to four years ago, would only lead to the Iraqi Shia pandering only to Iranian interests. The latter would mean perpetual confrontation with the US, recalling the hostile actions by the Iran backed Iraqi militias against the US embassy and the lack of any progress in the Iran-US parleys in Vienna.

Sadr wishes to see disarming of all groups other than the official Iraqi Armed Forces and an aide to the Shia cleric has said disarming groups that are not under government control would also apply to Sadr’s own militia forces.  “No country wants forces that are stronger than its army,” said Dhia al-Assadi, a former top official in Sadr’s political movement. He said Muqtada Sadr would leave it to the incoming government to decide whether US forces should remain in Iraq. The current US presence in Iraq is approximately 2500. This presence is considered essential to prevent any resurgence of the IS. The Iran backed Iraqi militias seemed confident that they could prevent the return of the IS, but Sadr wants none of that.

If the election result is allowed to continue to dictate future government formation it would result in lower Iranian influence, something which may not be acceptable to the Iran backed groups. The attempted assassination of Prime Minister Al Khatimi could have been a veiled threat by them of what may follow if the Iraqi nationalist forces do not fall in line.

The outcome of this entire chain of events is likely to be enhanced street turbulence, should Iran choose not to back down. A turbulent Afghanistan on one flank and a restive Iraq with nationalist forces ranged against it in the west is not something that Iran would be happy with. This is all the more reason that Iran may not back down. Another round of intra-Shia hostilities could well be on the cards with strange bedfellows on one side; Muqtada Al Sadr and the US.

Nov 09, 2021
Very nicely explained Sir! Iraqi Shiis are the original 'Shiis' and proudly hold control of the Holy Places of the Shiis. They are Mesopotamian Semites (Arabic speaking). Whereas Iranians are racially different and culturally superior. Their brand of Shii is controlled by the Ayatollas of Qom. At some point, differences between both were bound to happen. Iran does not want a stable, strong Iraq to emerge. They will prop up anybody who can create trouble for American interests. The attempted assassination of the Iraqi PM was done by the Sh'ad pro-Iranian Militia. The Muqtada-al-Sadar Group do not want continued unrest and foreign interference in Iraq's internal affairs. Brig Suleimani of Iran's Al Quds Force when he was alive was very good at balancing the relationship between all the Shii Groups in Iraq. He was even considered to have become pro-US, as he was a very good negotiator. It was the Israelis who considered him to be a 'greater threat' and supplied the real-time information to have him assassinated by the blundering Americans! For a strong and peaceful Iraq to emerge, forging unity amongst all Shii Groups there is very essential. Otherwise, the strong Sunni minority of Northern Iraq will again emerge as the dominant 'power wielders' there!