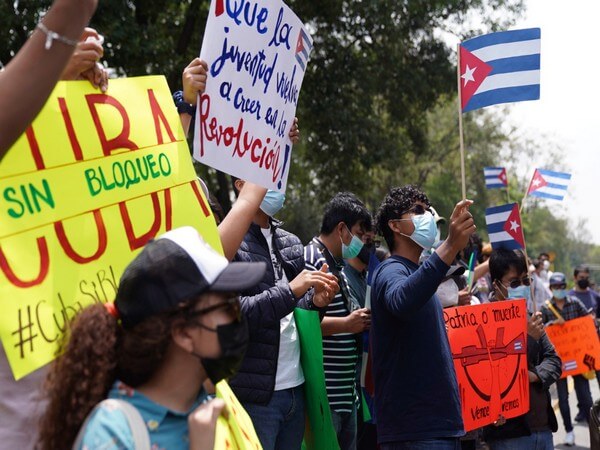 The unprecedented, historic and spontaneous protests on the streets of Havana and other forty Cuban towns on July 11, 2021 marked a watershed moment for the Communist regime in Cuba. For Cuba, which had overcome many challenges in the sixty years of revolution, mostly under Fidel Castro and his brother, Raul, the popular protests came as a shock to its new President, Miguel Diaz-Canel.

This was not the first time that Cuba had crushing economic difficulties, food shortages and a sense of insecurity. But this was the first time that the people demanded to speed up reforms against the  backdrop of the pandemic and shortage of food and medicine, which had ravaged the country. The protests were not called by the opposition, but by activists. Placards with words like “We want change” and “Down with dictatorship” had not been seen in Cuba before. Side by side with those placards were pictures of Fidel Castro, showing him in a positive light.

President Miguel Diaz-Canel asked his supporters to fight the protests, while taking part of the blame on himself for the situation. He also attributed the situation to the US economic embargo, which was re-imposed by President Trump, rejecting the agreement reached at the time of President Barack Obama. Raul Castro strongly supported the Government.

The protests were put down with an iron hand, particularly by deactivating the internet, which denied them a platform. But support from President Joe Biden and the Cuban exiles in the US might ignite the rage of the people again to demand fundamental reforms. The Government has already hinted that opposition candidates may be allowed to participate in the election, like in Iran.

The Cuban exiles in the US, who are estimated to exceed one million, have been the main drivers of the US policy towards Cuba since 1959. They came in different waves, some as political asylum seekers soon after the Cuban revolution and others seeking economic benefits. Many made use of the Cuban willingness to let them go and the American welcome accorded to them as part of the destabilisation strategy against Cuba.

The emotional baggage of the Cuban exiles was a factor that successive American administrations had to contend with in the formulation of the Cuba policy. Some of them, who rose in the political hierarchy of the US, actively campaigned against any softening towards Castro. Several political organisations sprang up in the areas, where Cuban exiles were concentrated. Apart from protecting the interests of the migrants, these organizations were concerned that any normalisation with Cuba would result in the loss of the refugee status that the new arrivals enjoyed in the US. The instinct of self-preservation, rather than ideology dictated their attitudes.

It should go to Barack Obama’s credit that he was able to overcome the fears about the reaction of the Cuban community by making a trip to Havana in 2014. He went beyond the requirements of the occasion to characterise it as historic, when he said, ‘I have come here to bury the last remnant of the Cold War. I have come here to extend the hand of friendship to the Cuban People.’

He devoted a considerable part of his speech to the travails of the Cuban exiles to allay their fears about the US compromising with dictatorship, even when conceding that every people should choose their path themselves.

In Cuba, he set the record straight on human rights and authoritarianism, even as he praised Cuba’s achievements in education and health. Fidel Castro was restrained in his response to Obama, but blessed the agreement, even while criticising the US embargo and the Guantanamo prison on Cuban soil.

The situation was ripe for a US-Cuba rapprochement long before it happened. The winds of globalisation had not left Cuba unaffected. The Cubans have always been more comfortable with the Americans than with the Russians at a personal level. Miami, and not Moscow, had been their promised land. After the Cold War, the two had learnt to deal with each other without intermediaries. The lifestyle and language of Cuban diplomats were more in tune with American aristocracy rather than with their comrades in Russia. Many points of crisis were resolved between them.

The Americans were fond of Cuban cigars and rum and quite comfortable with the beaches and bars of Havana. This natural affinity, rather than the terms of settlement, might determine the future of the relations between the US and Cuba.

The survival of Cuba as an independent country and its Communist system for more than half a century is a miracle in world politics. Fidel Castro defied the mighty United States throughout his life and faced assassination attempts, but died a natural death in his home, having handed over power to his own brother. The US and the Soviet Union came close to a nuclear war on account of Cuba and became a point of contention throughout the Cold War.

The Castro Government was characterised by the west as one of the worst for denial of human rights to its own people, particularly press freedom. But the country had internal peace and a fairly successful economy. It even extended military and humanitarian assistance to turbulent countries in Latin America, Africa and Asia. During the period 1979 to 1983, when I visited Cuba frequently from New York, it was a vibrant country with a friendly and fun loving people.

President Biden’s response to the developments in Cuba included sanctions against individuals responsible for oppression of the protesters, measures to bring increased internet access to the island and calls for more international pressure on the totalitarian government. The measures were outlined to a group of Democratic Cuban-American activists in Miami who had been calling for more action ever since the July 11 uprisings on the island.

“Advancing human dignity and freedom is a top priority for my administration,” Biden said, ” and we will work closely with our partners throughout the region, including the Organization of American States, to pressure the regime to immediately release wrongfully detained political prisoners, restore internet access, and allow the Cuban people to enjoy their fundamental rights.” Top Biden officials, including Secretary of State Antony Blinken and Treasury Secretary Janet Yellen, also released forceful statements, reiterating Biden’s message that they will continue to enforce Cuba-related sanctions and take action against human rights abuses.

The Cuban protests are likely to gather momentum and pose a threat to the Cuban Government, which does not have a Castro halo around it.  But with the long tradition of the Cuban Governments dealing with the dissidents through a policy of oppression and opportunities given to them to migrate to the US, it is possible that the situation may be brought under control.

President Biden does not consider Cuba a central issue for the US as Cuba does not pose a threat to the US anymore. He may be willing, therefore, to see a compromise being worked out between the Cuban authorities and the protesters. The other Latin American countries, who have good relations with Cuba may also exert some pressure on the Government of Cuba to make some concessions like reinstating the internet, which is a major demand of the protesters. Since the leadership is determined to ensure law and order and it has the machinery to prevent a regime change, Cuba faces an uncertain future.

India has maintained cordial relations with Cuba, going back to the days of Cuba’s chairmanship of the non-aligned movement, followed by PM Indira Gandhi’s leadership of the movement. Fidel Castro was a great friend and admirer of India.

India has no role in the current crisis in Cuba, but our effort will be to see a reconciliation in the country. The Communist Cuba has been like a cat with nine lives, but we do not know how many of them are still there to survive the current crisis.