Book Review – ‘The Force Behind The Forces’ 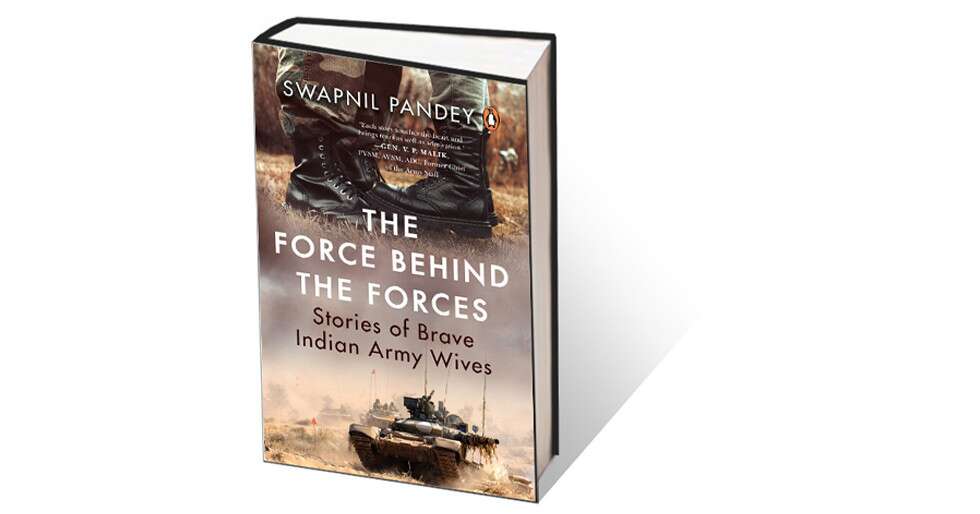 Books have immense healing power. Reading is an intimate process; it is between you and the book which is silent and yet it contains words powerful enough to bring revolutions. Recently I came across one such book ‘The Force Behind The Forces’ written by Swapnil Pandey.

I lost my soldier Lt Col Rishubh Sharma in January 2021. He was the Flight Commander in 254 Army Aviation who made the supreme sacrifice in the line of duty in a Dhruv helicopter crash in Jammu & Kashmir. The wounds are still fresh and when I came across this book I knew it was going to be a powerful and inspirational book. I would like to start this book review with a heartfelt thanks to the author for not just compiling our stories which puts us at the centre spot rarely ever done before, but the dedication also touched my heart.

‘Dedicated to all the Veer Naris who in their quest of finding strength inspire us all. Know, you are not alone and the nation stands with you all.’

The book blurb says, ‘Who continues to pay the costs of war long after our soldiers are gone? There are many stories of courageous heroes at the borders, but how much do we know about the women standing strong behind them?’

‘The Force Behind the Forces’ is a collection of seven true stories of eternal love, courage and sacrifice. Written by an Army wife, Swapnil Pandey, this book brings to light moving stories of unimaginable valour in the face of broken dreams, lost hopes, and shattered families. It proves that bullets and bombs can only pierce the bodies of our soldiers, for their stories will live on in the hearts of these brave women forever. Women who have dedicated their lives to the nation, without even a uniform to call their own.

The stories are suitably highlighted with an eye-catching powerful book cover. The masculine and feminine aspects of the Armed Forces have been perfectly captured in it. The dust and tank on the cover makes it powerful and the male and female boots add a lot of romance to it which again depicts the strength of fauji relationships perfectly.

The book touches all the chords of my heart and brings emotion, nostalgia, warmth, and sadness. The stories are deeply moving. There are a total of seven stories in the book. Six of the stories are of Veer Naris in which their journey with their soldiers and the courage and resilience they hold as women married to men in olive green are highlighted.

The seventh and the last story is a happy one; ‘The Kargil Love Story’ as the name suggests is the story of  Kargil War Hero Captain Naveen Nagappa and his wife Sowmya Nagappa. This story is certainly delightful to read when you reach the climax of the book which mostly contains stories of losses in the line of duty. The climax of the stories bring melancholy but the stories are interesting to read because of the mix and match element of a typical fauji life from thrilling operations to the glamorous fauji life to the end when the fauji makes the supreme sacrifice.

The author, Swapnil Pandey, has been successful in describing every nitty-gritty of fauji life in a manner I don’t think anyone else could have described. This is simply because she is an Army wife herself. She not only knows what does it take to fall for a uniformed soldier, but she can completely relate to the losses as well. This fact brings power to the book that even as a Veer Nari I myself have cried while reading the stories and also smiled for hours after reading the last story of happily ever after. The author’s background as a fauji wife herself makes the book authentic and powerful. Though the book is not just meant for fauji folks, I feel every Indian must read and understand more about the Indian Army. You cannot claim to know the Army if you don’t understand the ethos and emotions that drives our soldiers.

The author mentions how writing this book was not an easy journey and she broke down many times. But the courage of Veer Naris and the sense of purpose eventually pushed her to complete the book. Unlike other defence novels, ‘The Force Behind The Forces’ is exceptional. It not only covers the counter-insurgency operations and various thrilling missions to highlight the valour of Indian soldiers on the battlefield, but the complexity of the emotions a fauji family holds is also portrayed perfectly. I would like to applaud the author for picking up a unique and sensitive subject and weaving it perfectly highlighting the exceptional valour, courage, pride, and dignity that a soldier reflects in the line of duty which eventually becomes the character of a fauji family.

I would also like to mention that the book was privileged to be launched by Dr. V. Mohini Giri, Padma Bhushan. Dr. Mohini Giri is a renowned social activist, an Indian community service worker and also a champion for women’s rights in India. She launched the book amidst the presence of war widows from all across India on the occasion of the Golden Jubilee celebrations of the War Widow Association.

The book has also been immensely supported by many Indian celebrities and eminent personalities for the sheer scope, intensity, and uniqueness of the book on a subject which had been neglected for long. The collective voices in solidarity with Veer Naris provide deep sense of purpose to the book. It has helped raise a lot of awareness towards war widows and their contribution to nation-building.

I recommend this book to every Indian to know that fauj is just not about guns, boots, and beret but more about ethos, spirit, and emotions. This book should be made part of school and college curriculum.

I will end this review on a note that ‘The Force behind the Forces’ is not just a book but a ray of hope and I am sure it will provide hope and courage to the women grieving the loss of their soldiers.

Mrs Radha Sharma is the wife of Lt Col Rishubh Sharma, an aviation officer in the Indian Army, who made the supreme sacrifice in January 2021.

Mar 05, 2022
One of the best books on real life stories i have read in a long time. Proves that how many lives get affected by the passing of one soldier. Proves how a soldier is not only a killing machine but a human. There was no chapter where i didn't shed tears while reading. Why this book makes an impact is because some of the stories we saw unfolding in front of our own eyes on TV. This book doesn't only represent the "Shauryagatha" of our soldiers but the people they leave behind as well.