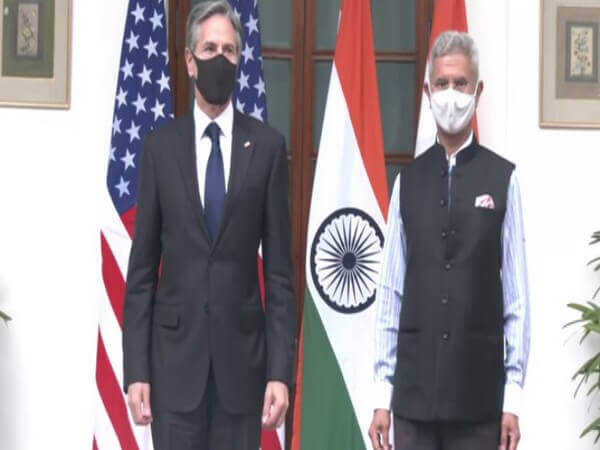 High level engagement between India and the US has continued with Secretary of State Blinken returning within two months of External Affairs Minister Jaishankar’s visit to the US. While the visit produced no new agreement, a follow-up on the discussions Jaishankar had in Washington was apparently considered useful by both sides. At New Delhi the two sides, according to Jaishankar, “spoke at length about regional concerns, multilateral institutions and global issues, the expanding Indian footprint, be it in Africa, South-east Asia, Caribbean or the South-Pacific”, which in his view has “broadened the shared agenda”.  Afghanistan, the Indo-Pacific and the Gulf were particularly focused on.

While the general level of understanding between India and the US has visibly grown on several issues, differences in thinking and objectives remain in some important areas. This requires an alert management of ties so that the divergences do not impede the momentum built by the convergences.

On Covid-19, which Blinken stressed was on top of the agenda of the talks, India and the US can by working together address the international need for access to affordable vaccines. India has just approved the Johnson vaccine for emergency use. This suggests that the project to produce 1 billion doses of this vaccine in India by the Quad for the Indo-Pacific region should proceed.

For India the supply chain of intermediates from the US required for domestic production being of prime importance, Jaishankar thanked the US during Blinken’s visit for extending this vital support. Blinken noted that over the past few months, the US government had contributed more than $200 million to India for COVID-19 relief, with substantial contributions from the private sector as well. He announced an additional $25 million by the US government to support vaccination efforts across India. The issue of indemnity sought by Pfizer for vaccine supplies to India has become very tricky legally and politically as no discrimination can be made on this score between Pfizer and Indian companies producing vaccines, not to mention the Russian Sputnik vaccine to be manufactured in India.

On Climate Change issues the absence of public expression of India-US differences on details shows a willingness on both sides to avoid treating this as an almost bilateral issue, as has been the case in the past, though a hint of this can be detected again in Blinken’s remark that “At a time of rising temperatures and sea levels, we – two of the world’s largest carbon emitters – are on the front lines of the climate crisis and the leading edge of a new green economy”. India goes to COP 26 with stronger hands as the only major country that will fulfil its 2030 commitments under the Paris Agreement.

India will be pressed at the Glasgow COP 26 to announce a year for achieving a carbon neutral economy, or at least, the year by which its emissions will peak. India is in an unenviable position of having a level of energy consumption far below other major economies, but by virtue of its size it is in the spotlight as a major carbon emitter. The inbuilt inequity in climate change negotiations between the West and the developing countries, especially India, as we constitute 1/6th of the world’s population is glaring, which obliges India to fight for climate justice.

India cannot agree to phasing out of coal on which western pressure is building up. The issue of financing is not likely to be satisfactorily resolved, not the least because of Covid-related financial pressures on the advanced economies. India has already asked the advanced economies to reduce their per capita emissions to the global average by 2030 and considers achievement of net zero carbon emissions by mid-century as inadequate. In April this year the US-India Climate and Clean Energy Agenda 2030 Partnership was launched. Climate Change issues are also being discussed within Quad where India’s concerns are not aligned with those of the three others. In the battle ahead one hopes that India-US ties will not get bruised.

Trade ties were obviously discussed during the visit.  As in the case of other subjects, Blinken was diplomatically astute in framing them as shared concerns, not only as US expectations of India. He placed trade ties in the context of “the very painful secondary consequences of the pandemic”. “To fuel our economic recovery, India and the United States must continue to grow our trade relationship, and beyond that we have to keep working through the barriers that stand in the way of greater bilateral investment and deeper commercial ties”, he said. With India opening up to the EU for a FTA and an Enhanced Trade Partnership with the UK, the prospects of resolving some outstanding vexatious issues seem more positive than before.

The Quad is gaining momentum. India is now more committed to it, but not merely as a security arrangement, important though that dimension is. Jaishankar noted that India’s “ability to work more closely, bilaterally, in the Quad and elsewhere, benefits the international community as a whole”. Maritime security, HADR, counterterrorism, connectivity and infrastructure, cyber and digital concerns, COVID-19 response, climate action, education and resilient and reliable supply chains are part of India’s Quad agenda. Blinken supported a broader Quad agenda by stating that the four countries are “coordinating, pooling our resources, pooling our thinking, and actively collaborating on a whole variety of issues that have an impact on the lives of our people: on COVID-19 and the vaccine initiative… working on post-pandemic economic recovery together, working on the climate crisis as well as a whole series of issues – everything from maritime security to infrastructure”. The “Quad is not is a military alliance”, he clarified.

Jaishankar, in turn, emphasised India’s interests not only in the Indian Ocean, but also in the Pacific Ocean, in the Indo-Pacific, pointing out that its major trade partners and routes and political partners are there. He openly spoke about rebalancing in which India with expanded capabilities would like to be part of in cooperation with others. He cautioned against any country believing that such regional arrangements are directed against it.

The decision to hold the next Malabar exercise in the western Pacific instead of in the Indian Ocean sends an important political signal. Any doubt that the invitation to Australia to participate in the previous Malabar exercise was one-time has been removed. India will also do naval exercises with Vietnam, Philippines and Indonesia in the South China Sea, as well as with Singapore. This gives some security depth to the Indo-Pacific concept.

“We share a vision – India and the United States – of a free, open, secure, and prosperous Indo-Pacific. We’ll work together to make that vision a reality”, Blinken remarked. It remains to be seen how this will get translated into hard policies on the ground. US corporates are already asking for removing the tariffs on Chinese products announced by Trump and want to do profitable business with China. The announced policy of cooperating, competing and confronting China leaves sufficient room to decide how much relative weight to give to each element. Let us see if the US leads the move to boycott the winter Olympics in China in protest against China’s aggressive and expansionist policies abroad and its conduct at home. US and western participation would amount to endorsing Xi’s defiant wolf warrior policies.

On Afghanistan, India and the US are not on the same page. The US is leaving behind a situation on the ground that endangers India’s security. While the US may see Pakistan as a partner in stabilising Afghanistan, India rightly sees Pakistan as a hugely destabilising force with publicly stated anti-India objectives in Afghanistan at the strategic level, to be advanced through terrorism and Islamic radicalisation. That Blinken sees US and India continuing “to work together to sustain the gains of the Afghan people and support regional stability after the withdrawal of Coalition forces from the country” is diplomatic evasion.

Blinken’s views on pressures on the Taliban to act responsibly to avoid becoming a pariah state seems to be wishful thinking, given its current violent campaign on the ground. Jaishankar chose to play along with Blinken on the issue, to make the best of a bad bargain and continue to hope for US pressure on Pakistan as things worsen. Afghanistan, he noted, must neither be home to terrorism nor a source of refugees.

For the State Department to announce before Blinken’s visit that he would raise human rights issues with India was a needless provocation. This was playing politics with a sensitive issue both at home and in India. The Indian side chose not to get provoked as this would have drawn attention away from the larger objectives of the visit. In the end, Blinken played his cards carefully, raising democracy and human rights issues in a general way and neutralising adverse Indian reaction by acknowledging that US too had to address its own issues in this regard. His meeting with civil society leaders at the start of his visit made the point he was expected to make but the choice of invitees (not officially divulged) and the decision to avoid giving the event much publicity showed that the US side wanted to handle this sensitive subject as discreetly as possible.

In an elaborate answer to a provocative question from an American correspondent on backsliding of democracy in India, Blinken must have disappointed lobbies in the US and in India, though the airing of these issues during the course of a high-level visit that doesn’t help the relationship was achieved.  Blinken remarked that what the “Americans admire most about India is the steadfast commitment of its people to democracy, to pluralism, to human rights, to fundamental freedoms”, adding that  “every democracy, starting with our own, is a work in progress. And when we discuss these issues, I certainly do it from a starting point of humility. We’ve seen the challenges that our own democracy has faced in the past and faces today. But this is, in a sense, common to all democracies”. Blinken added that “the most remarkable democratic elections in the world, in many ways, are here in India, just by sheer numbers. It’s the largest expression of free political will by citizens anywhere on Earth”. This would not have pleased many lobbies in India who have solicited US political intervention on these issues. Jaishankar added discreetly that “it is the moral obligation of all – of all polities to right wrongs when they have been done, including historically… And that freedoms are important, we value them, but never equate freedom with non-governance or lack of governance or poor governance”.

All in all, we are seeing a steady consolidation of India-US ties, but with India preserving its options, as Jaishankar’s visit to Russia and Iran shows.

Aug 13, 2021
certainly we should not depend on USA and we should not believe Russia. we have to stand on our legs. no country fight with USA Or Russia. because they are having capability to in armed forces. I read chanzigkhan book in one incident he told that no country will peace full when their armed forces are strong. with out this no peace. we have to prove our capabilities time has come. if we loose this time when we will get another opportunity come we can't say. arya Chanikaya express that opportunity to be used in time. what will happen we have to wait and watch.