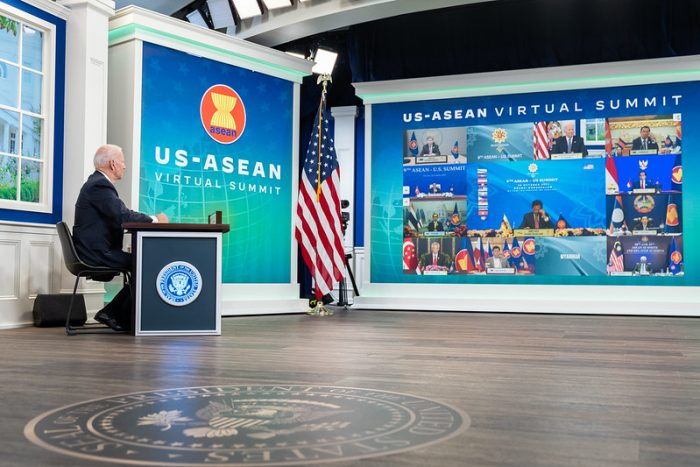 Washington, May 12 (PTI) The Biden administration has taken the Quad, the informal grouping of Australia, India, Japan and the United States, to the leadership level, the White House said on Tuesday on the eve of its US-ASEAN Special Summit.

“We are the first administration that has taken the Quad — that is the United States, Australia, India and Japan — to the leader level. We have had a number of meetings and they will meet in Tokyo at the president’s travel,” a senior administration official told reporters on the eve of the US-ASEAN summit. Leaders of ASEAN countries started arriving in the American capital on the eve of the historic summit that US President Joe Biden is hosting for them.

“We have decided for the first time in seven decades to share sensitive nuclear submarine technology with another country. We launched AUKUS that binds and bonds Australia, Great Britain and the United States in a fundamental endeavour to deliver on the promise of nuclear-powered submarines,” the official said. “But this partnership will also include more areas of technology cooperation with other countries. We will have more to report on that as we go forward. I think what we have also seen is substantial engagement in the Pacific,” the official said.

“Clearly, the Indo-Pacific is a broad region and too often we speak a lot about Southeast Asia, Northeast Asia, India. But it is equally important to focus on the Pacific and you will be seeing indications of that going forward,” the official said. The Biden administration has also broadened and deepened its discussion with Europe and Asia about each other. “We have seen unprecedented Indo-Pacific cooperation in the challenges that Europe has faced since the Russian invasion of Ukraine, more generally,” the senior administration official added.

This is the first time in its 45-year history that ASEAN leaders will be welcomed together to Washington, DC. “There is a daily urgent set of demands as the West, the transatlantic community is engaging deeply on what is going on at the battlefield in Ukraine. That obviously takes an enormous amount of time, focus, energy and resources currently of the senior leadership,” the official said. “But it is also the case that there is a deep recognition that fundamental long-term challenges are playing out in the Indo-Pacific. The US is committed and determined to ensuring that our engagement in the region is broad, broad-based and sustained,” the White House official said.

“So part of that will be the hosting of the summit. Part of it will be the trip to South Korea and Japan. And as part of each of those stops, there will be a range of engagements, including the fourth Quad meeting at the leader level in just over a year. That will be hosted by (Japanese) Prime Minister (Fumio) Kishida in Tokyo on May 24, next week or the week after next,” the official added.

On Thursday, House Speaker Nancy Pelosi and other senior Congressional leaders will welcome the ASEAN leaders to the Capitol for a bipartisan working lunch. After that, the ASEAN leaders will meet senior American business leaders and CEOs to discuss ways of strengthening economic cooperation between one of the most dynamic regions on the planet and the US. They will be joined by the secretary of commerce and the US trade representative. There will be discussions at this session about the key challenges ahead in technology, post-Covid recovery, issues associated with climate and energy.

In the evening, Biden will be hosting the ASEAN leaders for an intimate dinner in the White House, for an opportunity to listen to the leaders about their aspirations for where they want to take ASEAN and how the US can help in that in the period ahead, the official said. On Friday, Vice President Kamala Harris and Secretary of State Tony Blinken will host the ASEAN leaders for a working lunch at the State Department and it is focussed primarily on maritime cooperation, pandemic recovery and health security.

Harris will also host a discussion with the ASEAN leaders and other cabinet officials from across the interagency regarding climate action, clean energy and sustainable infrastructure, the official said.