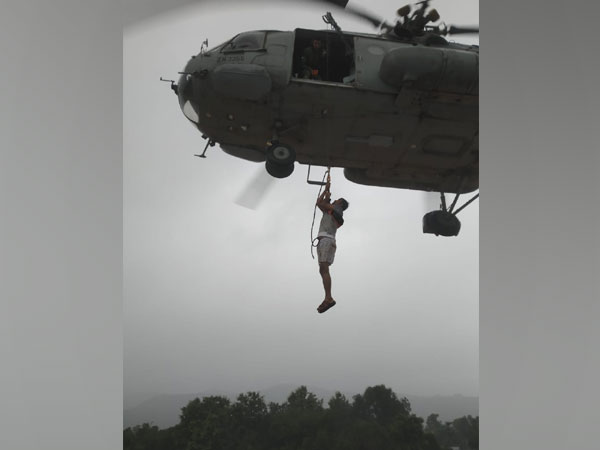 Mumbai (Maharashtra) [India], July 23 (ANI): Indian Army has mobilised teams to Maharashtra, which has been hit by torrential rainfall that triggered landslides and flooding in several districts of the state.

The Army under ‘Operation Varsha’ has mobilised colums in action for flood relief in the state. A total of 15 relief and rescue teams comprising troops from Aundh Military Station and Bombay Engineer Group based at Pune have been deployed overnight in affected areas of Ratnagiri, Kolhapur and Sangli districts of the state.

The Army said based on request by the civil administration it has mobilised flood relief and rescue teams to assist the local administration in flood affected areas- in the districts of Ratnagiri, Raigad, Pune, Satara and Kolhapur and Sangli. “With the unprecedented rains and resultant heavy flow of water in various rivers, a number of areas in many states are likely to be impacted by floods,’ read a release by Ministry of Defence.

Lieutenant General JS Nain, GOC-In-C Southern Army stated that the Indian Army stands with people in these testing times and all assistance will be provided by the Army in the affected areas. The flood relief columns include engineering efforts and medical teams from Army for providing necessary first aid and medicines to locals being evacuated from flood-prone areas.

The Western Naval Command of the Indian Navy based on request received for assistance from civil authorities has deployed a total of seven Naval Flood Rescue Teams (FRT) from Mumbai to Ratnagiri and Raigad districts.

“One Seaking 42C Helicopter from Mumbai was deployed for aeriel reconnaissance at Poladpur/Raigad during on 23 July. One ALH helo from Goa was positioned at Ratnagiri for relief/rescue AM 23 July, additional flood rescue teams are being maintained on a high degree of readiness at Mumbai, for immediate deployment,” a Navy release said.

Also Maharashtra Coast Guard has pressed two disaster relief teams (DRTs), one each Mahad and Chiplun, besides pressing a helicopter into rescue operations. “These teams are working in tandem with the local administration and have rescued 52 people so far and shifted them to safe locations,” the Coast Guard said.

The Coast Guard has extended the facility of its airbase at Ratnagiri to Indian Navy and Indian Air Force aircraft to operate from this base for rescue and relief operations in Maharashtra. Maharashtra Chief Minister Uddhav Thackeray on  Friday announced ex-gratia of 5 lakh each for the kin of those who lost their lives in the landslides caused by torrential rainfall in various parts of the state.