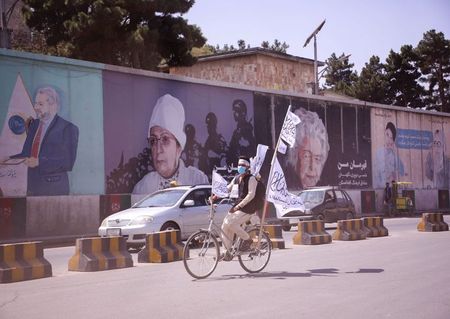 (Reuters) – After a lightning military triumph and the departure of the last U.S. flight on Monday, the Taliban faces the challenge of forming a government that can unite different factions and rebuild Afghanistan after 40 years of war.

The movement is expected to announce the makeup of its government https://www.reuters.com/world/asia-pacific/taliban-co-founder-baradar-lead-new-afghanistan-govt-sources-2021-09-03 in the next few days. At stake is its ability to govern a country facing deep economic crisis, a humanitarian disaster caused by drought and hunger and threats to security and stability from rival jihadist groups, including a local offshoot of Islamic State.

Caught by surprise by the speed of the outgoing government’s collapse, the Taliban were left scrambling to keep order in Kabul after President Ashraf Ghani fled and security forces melted away, and they have taken weeks to form a new administration.

“A guerrilla war is one day here, one day there. This is different,” said a senior Pakistani official with knowledge of the situation in Afghanistan. “It will take time.”While the Taliban’s supreme leader Mullah Haibatullah Akhundzada has remained silent, Mullah Abdul Ghani Baradar, one of the group’s founders who is now head of the political commission in Doha, has been the public face of the leadership.

A government headed by Baradar under the spiritual guidance of Akhundzada is expected but the Taliban are made up of different elements whose interests and priorities must be reconciled, sources in the movement say. On Tuesday, Taliban spokesman Zabihullah Mujahid said the senior leadership wrapped up a three-day meeting in Kandahar to discuss the path ahead.

Mujahid did not respond to requests for further comment on the discussions or on balancing the priorities of different elements of the Taliban. But he said separately that preparations were in their final stages and the announcement of the government was expected “in a few days.”

Zahid Hussain, a Pakistani specialist on the movement, said the Taliban had changed from the monolithic group commanded by its founder Mullah Omar in the 1990s. “Mullah Omar had absolute power. Whatever he would say was basically obligatory for everyone to follow,” he said. The movement now had distinct political and military operations that must coordinate.

Leaders who have spent years in the political office in Doha negotiating with international powers will now have to work with younger commanders who fought the war and who could now expect a say in shaping the peace will be one issue, Hussain said.

As Taliban fighters entered Kabul on Aug. 15 to find the presidential palace abandoned and the city left to its fate, the jubilation of those streaming into the capital hid differences that need to be dealt with carefully, according to a senior Taliban commander.

Some of the group’s core leaders, from regions near the Taliban’s birthplace in the southern city of Kandahar, were wary of the growing political role assumed by the Haqqani group whose Badri313 special forces unit spearheaded the seizure of Kabul.

Taliban sources said the unit captured a series of important buildings including the presidential palace and the defence ministry, increasing the influence of the Haqqanis, a powerful group from the borderlands with Pakistan designated as a Foreign Terrorist Organization by the United States.

“The Kandahar and Zabul faction was previously more powerful in the decision making process, but now the Haqqani group is more dominant as they seized control of Kabul,” said the commander, who declined to be named because of the sensitivity of the issue.

Even among the core southern leadership group, there are different allegiances around senior figures like Baradar and others including Mullah Omar’s son Yaqoob, who has his own supporters in Kandahar. The fall of Kabul has now also seen newer figures emerging like Anas Haqqani, youngest son of one of the founders of the Haqqani network, which has been blamed for some of the worst suicide bombing attacks of the war.

“They are not monolithic, and they are not monolithic within their own divisions,” said one Western diplomat with long experience in the region. In the days following the fall of Kabul, Anas Haqqani has taken an increasingly visible political role, emerging from the shadow of his brother Sirajuddin Haqqani, the deputy leader of the Taliban, who has a $10 million U.S. bounty on his head and has not appeared in public.

Boosted by the successes of Badri313 unit, Haqqani has been one of the most prominent Taliban faces on social media since the fall of Kabul, posing for photographs everywhere from the newly secured airport to a meeting with members of Afghanistan’s popular cricket team.

Reuters was not able to contact Anas Haqqani directly but in an interview with Turkish television station TRT World he said he would like to be a soldier or to work and serve the people but added: “If they tell me to stand aside, I will.” For years, the U.S. military and the Western-backed government in Kabul tried to exploit divisions within the Taliban by appealing to commanders perceived to be more open to negotiations, without succeeding in fracturing the movement.

Outside Afghanistan, countries trying to understand the new Taliban order say they are closely watching to see if different groups can maintain a common purpose as the challenges of running a country mount. “For the Taliban, speed is of the essence,” said a senior regional diplomat, speaking on condition of anonymity. “Marshalling revenues and breathing life into the economy will be their biggest challenge.”

The deep economic crisis, made worse by the loss of thousands of trained and educated specialists in the flight from Kabul, and an emerging security challenge posed by a local affiliate of Islamic State are the most pressing challenges.

One of the poorest countries in the world, Afghanistan now faces being cut off from the billions of dollars in foreign aid that kept the economy afloat, just as severe drought threatens to create a humanitarian catastrophe. The group has promised an amnesty for former opponents and rights for women compatible with Islamic law. It has pledged to allow people to travel freely and asked for diplomatic relations with foreign powers including the United States.

Overtures have also been made to former leaders like ex-President Hamid Karzai, but whether figures associated with the former administration will have more than a symbolic presence remains to be seen. Among the names that have surfaced as potential ministers, most appear to be veteran commanders from the southern provinces, whose presence in government would do little to suggest a more open approach.

It is also unclear how they will treat ethnic groups like Persian-speaking Tajiks or the mainly Shi’ite Hazara, many of whom are deeply mistrustful of Pashtuns who dominate the Taliban and who have traditionally provided Afghanistan’s rulers.