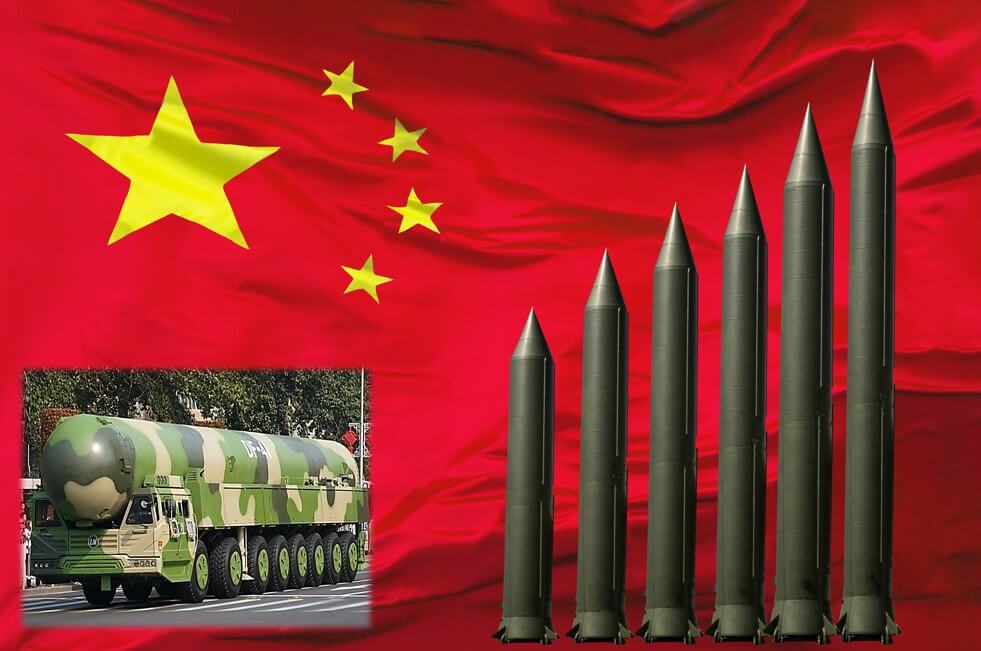 “There is, in fact, an axiom of proliferation. It states that as long as any state holds nuclear weapons, others will seek to acquire them.”

The term ‘nuclear warfighting’ as is being frequently used in the  context of inputs regarding China’s recently reported  flurry of construction of likely missile silos in the Gansu District in Northwestern China, is, in the humble view of this author, an oxymoron, especially when viewed against the postulate of warfighting as enunciated above. This is so as any conflict involving the exchange of nuclear weapons, regardless of the originator, will ultimately snowball and lead to MAD, or Mutually Assured Destruction! It is in this context that the growth and recent developments of China’s ‘expanding nuclear arsenal’ are being examined in this article.

China’s nuclear weapons program began in 1955, which was to later culminate in a nuclear test in 1964, thus heralding the age of China’s ‘nuclearisation’. The nucleus of the erstwhile People’s Liberation Army Second Artillery Corps (PLASAC), the ‘missile arm’ of the PLASAC, was however created earlier in Beijing in 1958 with the moniker of the ‘Artillery Training Group’. The operationalization of China’s nuclear forces commenced with that of the 802nd Artillery Battalion (akin to own Artillery Regiment), presently 802 Launch Brigade as part of 53 Base at Kunming in Southern China. Incidentally, Kunming is also the closest missile base to the Indian Subcontinent, with a ‘crow- fly’ distance of less than 1000 km to the Indian mainland! Two years later, four more battalions were raised. These units, which were later upgraded to Brigades, were collectively known as the ‘Old Five’ and formed the beginnings of the PLASAC. However, these entities were still a loose conglomeration of forces and had no tailor made nuclear command and control structure. This changed when China’s Central Military Commission (CMC) issued formal orders for the raising of Headquarters PLASAC on 06 June 1966. In 1985, the SAC’s 801 Launch Brigade became the first to be equipped with the Dongfeng (DF)-5 Intercontinental Ballistic Missile (ICBM), which has a stated range of 12,000 to 15,000 km, capable of hitting all parts of the globe! This liquid -fuelled ICBM is still in service. By the end of the 1980s, China possessed a credible nuclear force with over a 100 missiles.

The PLASAC, while being the custodian of the complete nuclear and conventional missile arsenal, continued to remain an independent arm of the PLA.  On 31 December 2016, the CMC ordered the elevation of the PLASAF into a full service branch, on the same level as the PLA Ground Force, Navy and Air Force. The PLASAC was renamed the PLA Rocket Force ( PLARF).  The word ‘strategic’ was deliberately omitted in the PLARF name to reflect its dual nuclear and conventional capabilities.

China has rapidly expanded its nuclear weapons’ arsenal over the last decade or so and presently possesses land, sea and air platform launched weapons, thus completing the Nuclear Triad. Global estimates have indicated an increase from 290 warheads to about 320- 350 presently, over the entire triad, including newly developed assets. The development of China’s nuclear arsenal is in line with the aims of the PLARF (then PLASAC) enunciated in the Chinese White Paper on Defence (2015) which implies that the (then) PLASAC will aim to strengthen its capabilities for strategic deterrence, nuclear counter attack and medium & long range precision strikes.  The connotation of ‘precision strikes’ is thought to fit into the domain of conventional weapons, thus offering flexibility of operation below the nuclear threshold. China’s nuclear modernisation therefore centres around guaranteed survivability, robust deterrence and assured retaliation capability, in keeping with the assigned strategic tasks of ability to maintain strategic deterrence and carry out nuclear counter-attack, fitting into China’s declared No First Use policy. However, these aims also put on the PLASAF the burden of continued and accelerated modernisation, one that China seems to be shouldering in letter and spirit.

China’s nuclear modernisation is likely to have been driven by a host of factors, primary among them being the threat perception that increasing US intelligence, surveillance & reconnaissance (ISR) and long range conventional precision strike capabilities would pose serious threat to China’s limited numbers of assets with high activation times and easily identifiable fixed locations. In addition to just piling on the numbers, China has therefore had to look to enhance effectiveness, reach and survivability of its nuclear arsenal. The advancement has consequently taken place in increased lethality/ accuracy as well as propulsion technology, with more manageable and readily deployable solid- fuelled missiles like the DF-41 finding favour over the cumbersome liquid- fuelled missiles like the DF-5. The PLARF inventory now poses credible threat even to the US and Russia- the world’s leading nuclear powers, in spite of their  superiority in numbers. This has been made possible by a surfeit of new developments with enhanced reach/ lethality as enumerated below:- 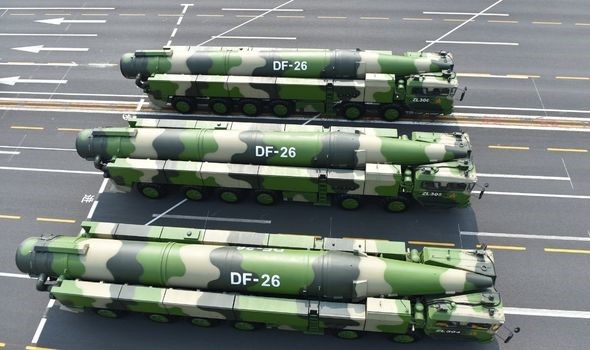 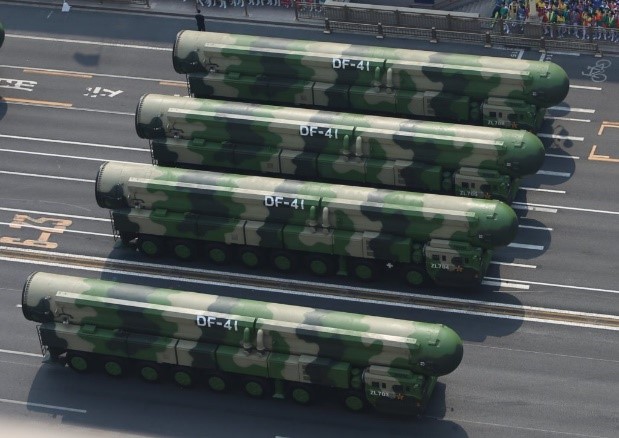 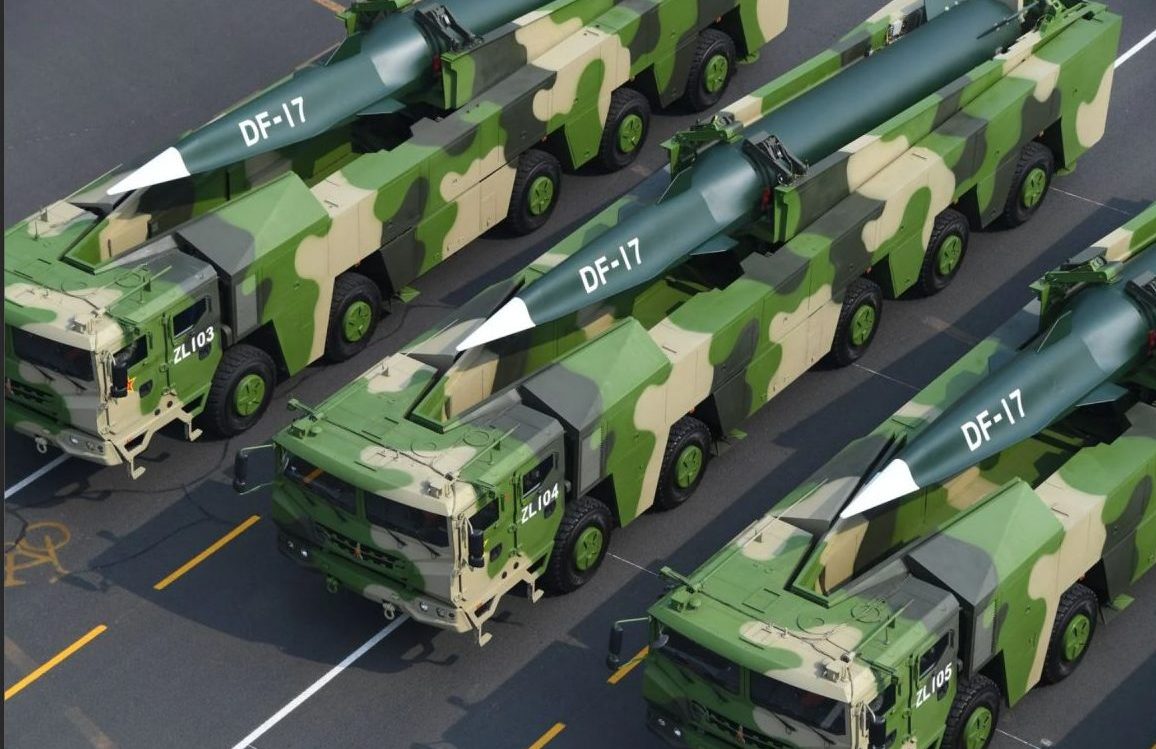 The recent flurry of construction of missile silos in Jilantai, Inner Mongolia, which is also the PLARF training area and in Yumen in Gansu Province in Northern China has evoked global interest. The number of silos in Yumen itself number about 119 and are spread over 700 square miles, while an aggregate of close to 150 silos is seen over various sites, including in Henan Province in Southeast China. Silos at these sites are constructed approximately  5 km apart, apparently to obviate multiple silos being destroyed in a single missile attack. An interesting fact to note is that most, if not all, silos appear to be smaller than those existing for the liquid- fuelled DF-5 ICBM. While a large number of silos are still under construction, certain characteristics offer inference- the silos at Jilantai clearly show a 180-200m alignment road connecting to the silo. This is likely to be for alignment of the TEL for a road- mobile missile. Also, existing DF- 5 silos show exhaust vents for heat dissipation to protect the liquid fuel storage from the heat/ flame of the launch. These are absent in most of the silos under construction. The silos under construction are similar to the Russian Topol- M (SS-27) solid- fuelled road mobile silos. These pointers lead to the inference that the new silos are likely to be for the road- mobile, solid- fuelled DF- 41/ Df- 31 A class of ICBMs. While the construction at certain locations is hidden under large bubble like structures, many open sites indicate that the PLARF is not trying to shield visibility of these silos, with a probable aim of advertising this expansion.

China’s present estimated nuclear weapon profile and comparison of inventories  has been tabulated below: 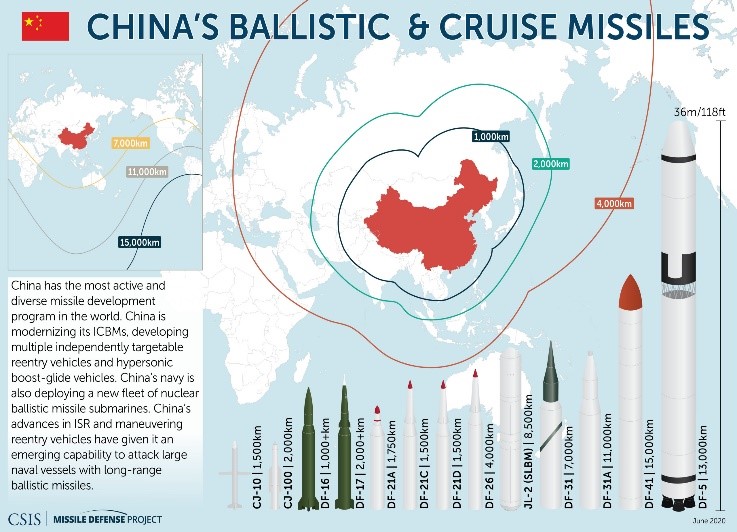 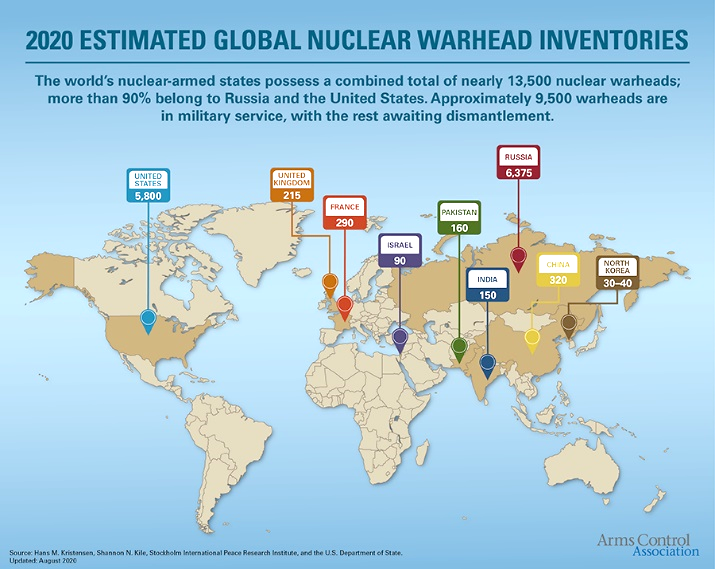 The inference of the above increased impetus towards creating infrastructure should be seen against the backdrop of China’s Nuclear policy of guaranteed survivability, robust deterrence and assured retaliation capability. The high visibility of the increase in silo sites               ( which does not necessarily indicate a commensurate increase in weapons) points towards enhancing the impression of a larger than actual arsenal and consequent increased deterrence against a nuclear misadventure by other Nuclear Weapon States. In the same breath, one could also postulate that even if a portion of the new silos are populated, that would imply an increase in the numbers of operationally deployed missiles, thus increasing chances of survivability through a pre- emptive nuclear strike and assured reaction capability in a second strike mode. The implication of road- mobile missiles populating these silos would also be to provide greater autonomous  mobility and consequent enhanced survivability by dispersion.

While China is known to store missiles in de-mated mode, with the warhead separated from the vector, the increase in solid- fuelled missiles offers quicker launch times and greater possibility of mated storage, thus increasing retaliation capability and allowing the PLARF to adopt a Launch- on- Warning posture, which allows launch of a  retaliatory strike upon warning of enemy nuclear attack.

Another option available to China is to use these silos to store conventional/ dual purpose missiles, thus enhancing capability of conventional precision strikes as mentioned earlier in this article. A further potential objective of increased silo (missile) population could be generate ability to launch attacks in ‘saturation mode’, wherein a surfeit of conventional warheads/ MIRVs are used to overwhelm ballistic missile defences like the THAAD of the US, previously described in an article on Chanakya Forum https://chanakyaforum.com/s-400-triumf-transforming-indias-air-defence/ .

And last, but not the least, is China’s perception of enhanced prominence with greater ‘muscle’, a theory that fits into the analogy of China’s Dream of transcending from a regional to a global power, thus challenging the status quo of a ‘Unipolar World’.

The present efforts of the PLARF at enhancing the number of silos are seen by some as an impetuous action, aimed towards rapid enhancement of inventory and a less than rational headlong rush into the ‘numbers’ game. This seems far from true. The actions of the PLARF now and over the years fit well into the Chinese perception of enhanced strategic threat from the US and conform to China’s nuclear strategy as enunciated above and in no way appear to be a façade without strategic propriety. In all fairness, China’s actions seem synchronous with the age- old thinking of the Dragon, which considers the protection of its mainland supreme, for all purposes and intents.

Jul 21, 2021
Dear Arvind, Well researched and elucidated. In my opinion the Chinese arsenal has proliferated comparitively lesser than its other hardware when compared with the top five armies in the world. Barring North Korea wherein there is always a looming threat of a maverick dictator unleashing a nuclear missile other armies are bound by restraint. The DongFeng family of missiles was closely studied by many world armies at the end of last millennium. Nonetheless own military think tank better be fed more on nuclear arsenal of the world as the nation sets out on implementing the Tri Services command

Jul 20, 2021
An extremely informative and well articulated article very lucidly explains the development of the Chinese nuclear arsenal in line with the aim of the PLARF as enunciated in their white paper.

Jul 19, 2021
Very informative and well written. However t he nature of warfare is changing. All out wars between Nation states may be a thing of the past. Nuclear weapons have never been used after the 2nd world War. How does the Chinese pursuit on nuclear dominance fit into this new world order. Where is the threat? or are these just a hoax to create a viable deterrence . Do elaborate in your next article.