What are Chemical Weapons and Are They Illegal? 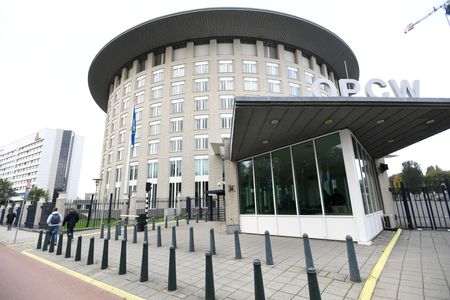 Ukrainian President Volodymyr Zelenskiy has expressed concern that Russia could deploy chemical weapons in the war and there has been an unconfirmed report of their use in the besieged southern port of Mariupol.

Chemical weapons production, use and stockpiling is banned under the 1997 Chemical Weapons Convention (CWC). Only Egypt, North Korea and South Sudan have not signed or ratified the international arms control treaty. Israel has signed but not ratified. The convention is overseen by the Organisation for the Prohibition of Chemical Weapons (OPCW) in The Hague, which can determine whether toxic chemicals were used as weapons and, since mid-2018, identify perpetrators in Syria.

Under the treaty, the use of the most dangerous “scheduled” toxins and their precursors is banned. This includes nerve agents sarin, VX and the Soviet-era developed Novichok, as well as the poison ricin and blistering agent sulphur mustard. A chemical weapon is “any chemical which through its chemical action on life processes can cause death, temporary incapacitation or permanent harm” through its toxic properties, the OPCW says. A non-controlled chemical, such as chlorine, could also become a chemical weapon if used in a conflict. Although condemned by human rights groups, white phosphorous is not banned by the CWC. Neither are cluster munitions, which fall under a separate international treaty.

Sulphur mustard was first deployed on a large scale in Ypres, Belgium, during World War One, when around 90,000 people died due to exposure to chemical weapons. Thousands of Kurdish people were killed, many of them women and children, in a large-scale chemical attack on Halabja in March 1988 during the Iran-Iraq war. In 1995, a doomsday cult in Japan released sarin in the Tokyo subway, killing 13 people and making thousands ill.

After decades of little use, sarin and chlorine barrel bombs were used systematically in the battlefield during Syria’s civil war, killing or injuring thousands. Roughly 150 cases are under investigation by the OPCW and 20 uses have been confirmed. Syrian forces backed by Russia, and to a lesser extent Islamic State fighters, were found to have used chemical weapons during the decade-long war.

Russia and Syria deny using chemical weapons and instead blame rebel groups and political opponents, or say attacks were staged to falsely implicate them. The largest single attack in Syria was in August 2013, in the Damascus suburb of Ghouta, when hundreds were killed in a sarin gas strike widely blamed by Western governments on Syrian government forces.

Russia has been blamed by states at the OPCW for two attacks with nerve agent Novichok, one against former Russian military intelligence officer Sergei Skripal and his daughter in Britain in March 2018 and another on a critic of Russian President Vladimir Putin, Alexei Navalny, in Siberia in August 2020. In April 2021, Syria was stripped of its voting rights by member OPCW states after its forces were found to have repeatedly used poison gas during the civil war. Damascus has failed to declare several banned substances found by inspectors.

Kyiv said on Tuesday that it was checking reports that Russian forces had used chemical weapons in the besieged port city of Mariupol. Ukraine had previously expressed fears that Russian forces could use prohibited chemicals, as has the United States. Neither has provided evidence to substantiate those concerns. Russian has formally destroyed tons of chemical weapons declared to the OPCW. But Moscow has repeatedly clashed with Western governments which blame it for the Skripal and Navalny chemical weapons incidents.

In October, 45 OPCW members called on Russia to clarify its alleged involvement in Navalny’s poisoning, in which Moscow also denies a role. Novichok, developed in the 1970s in the Soviet Union, was added to the OPCW’s list of scheduled chemicals and had been banned since July 2020. Both Russia and Ukraine are member of the OPCW, where states split along political lines over the Syrian war. Moscow has sought to limit the power of the organisation to identify perpetrators of chemical weapons attacks, both in The Hague and at the United Nations.

The United States has donated $250,000 to the OPCW as part of efforts to provide Ukraine with supplies and equipment in case Russia were to deploy chemical weapons.

By Anthony Deutsch for Reuters

Apr 13, 2022
The use of chemical weapons in any situation is highly reprehensible. Nevertheless, a lot of countries, including India, despite signing all relevant covenants, have their own secret chemical weapons programmes. The unfortunate truth is that, when it comes to war, there are no rules. In any war, achieving the objective of that war is the main priority which subordinates the means used for such achievement . End of the day, when it comes to war, it’s up to individual countries to define their own, war related, moral standards. That’s why, historically, in most conflicts, all major powers have conveniently tweaked their moral standards in order to achieve their desired goals.