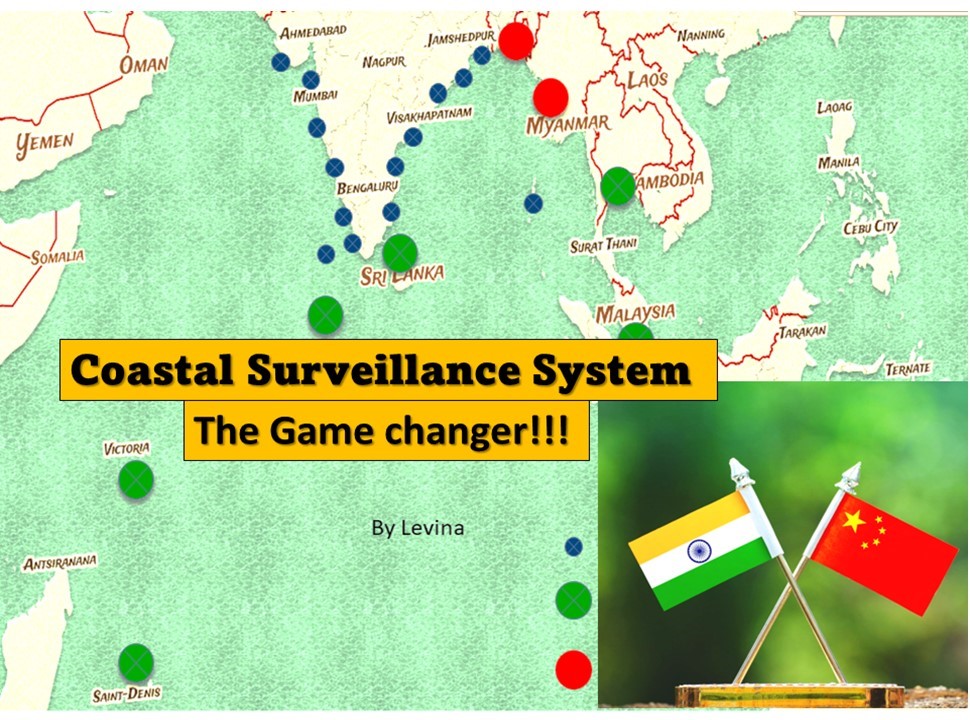 Bangladesh’s PM Sheikh Hasina was in India recently. The visit helped fructify many projects, especially one that India had been executing since 2019– Coastal Surveillance System (CSS). India nudged Bangladesh to expedite implementation of a 3-year-old agreement that allows India to set up a network of surveillance radars along the coastline of Bangladesh. Once completed in 2023, Indian coastline will be under the surveillance of 104 radar stations which will be one of the largest of such networks with radar stations extended to other friendly countries. CSS will then be a game changer for Indian Ocean Region!

Genesis of CSS can be traced to Kargil Review Committee recommendations, which had suggested that a network of radars along India’s shores are imperative for India’s security. After initial push for the project, governments changed, and projects got delayed till Indian Govt got a wake-up call in 2008. The Mumbai attacks of 2008 involved the terrorists trained from Pakistan sneaking into Indian territory via the sea in small boats.

An imperative part of CSS is the radar system. According to DRDO which created the Coastal Surveillance Radar, “It’ll be the primary sensor for Integrated Costal Surveillance System (ICSS). It is capable of detecting sub 20-meter boats such as county boats, dinghies and fishing vessels in heavy sea clutter environment in all weather conditions.” This will ensure, the enemy cannot execute another Mumbai attack on Indian soil, ever.

The radar is capable of operating 24×7. It has networking facility to operate either remotely or locally, also it has advanced tracking algorithms to track up to 1500 sea surface targets. 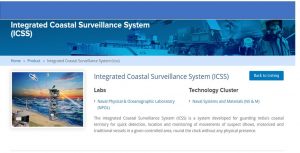 The Phase 1 of CSS project had been executed by Bharat Electronics Limited (BEL) and they installed remote static sensors at 46 locations across India. This included 36 of the stations that are on mainland India and 10 on island territories, including Lakshadweep, Minicoy, and Andaman and Nicobar Islands. According to Ministry of defence, contract with BEL was concluded on January 15, 2020 with a cost of ₹1814.32 crore.

Phase 2 of the CCS project will install an additional 38 stations into the radar network to strengthen coverage and to turn it into a leak-proof network.

CSS also includes 2 mobile surveillance stations which will be integrated with the two vessel traffic management systems (VTMS) in Kutch and Khambat in Gujarat.

The Indian Navy’s Information Management and Analysis Centre (IMAC) located in Gurugram is the nodal agency for maritime data fusion.

Beyond India’s preparation at sea and on land, India has been keeping of track of the military warships and merchant shipping in the Indian Ocean Region (IOR), through the ‘Sindhu Netra’ microsatellite developed by DRDO, which was launched last year. 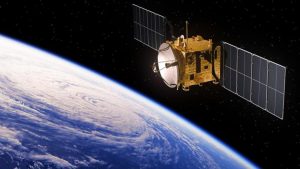 Eye on the Ocean: SAGAR (Security & Growth For All In The Region)

A pandemonium was created when Yuan Wang 5, the Chinese spy ship docked at the Hambantota Sri Lankan port. The Chinese are infamous for their debt traps and using civilian fishing boats for spying. There was a time when China had flexed its pecs at India and said, “Indian ocean cannot be the backyard of India”. The string of pearls strategy, wherein Communist party of China began exerting influence on chain of countries around India, was executed with the intention to stifle India’s growth.

CCS is just one of the many ways India can counter China in the sea. The radars meant for surveillance are not just limited to India, but it extends to other countries. It has already been installed in Sri Lanka, Mauritius, Maldives, and Seychelles, these will be very soon set up in Myanmar and Bangladesh too. Thailand has also been offered the radar system by India whilst Malaysia may see a pilot project. 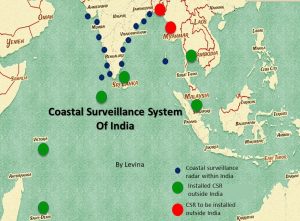 Earlier in March this year, India’s External affairs minister, Dr S Jaishankar had visited Maldives to hand over the extended Coastal Radar System to the chief of the Maldives National Defence Force, Maj Gen Abdulla Shamaal. The system, which comprises 10 radar stations, was built with an Indian grant of $15.8 million. During this visit, India’s Foreign Minister mentioned SAGAR—Security and Growth for All in the Region. 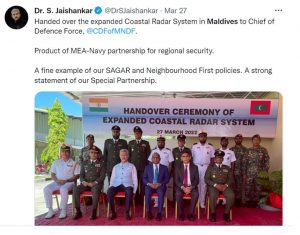 CSS is not the only example of SAGAR. India being a part of the Fishhook or the SOSUS (Sound Surveillance Sensors) network also benefits the countries in the Indian ocean region which share intel with India. The SOSUS network adds to China’s Malacca dilemma, it ensures that each time China’s submarines cross the Malacca strait, they come on India’s radar. You can read more about it in author’s article here.

Beyond this, India has been funding in other projects in its neighboring countries. India is assisting in the construction of the Sitwe port in Myanmar as part of the Kaladan transport project. The project will reduce the travel time between Kolkata and Mizoram by 4 days. Also, India has gifted INS Sindhuvir to Myanmar, which is the first submarine in its naval fleet.

India gifted a Dornier maritime reconnaissance aircraft to Sri Lanka in the month of August this year, just a day before a Chinese tracking ship Yuan Wang 5 docked at Hambantota. The Dornier will act as a force multiplier, enabling Sri Lanka to counter human and drug trafficking, smuggling and other organised forms of crime in its coastal waters. 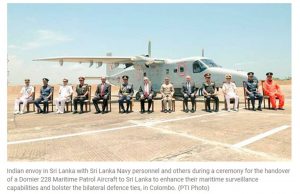 This shows the Himalayan task faced by Indian Navy and Indian Coast Guard to safeguard Indian shores and that of friendly countries in the region.

Therefore, Indian Navy has set up Information Fusion Centre-Indian Ocean Region (IFC-IOR) in Gurugram where all the data collected by CSS would be fed. The Indian government had invited other countries to join hands, and soon US, Japan, UK and France sent their ILO (International Liaison Officer) to India.

While effort has been going on to extend the CSS to myriads of India’s neighbours across the Indian ocean region, there are certain factors which impede the project. One such reason is presence of not-so-friendly government. In 2016, the then President of Maldives, Abdulla Yameen, had refused to let India install Indian radars, as he was heading a pro-China government.

In case of Bangladesh, India doesn’t have to worry about the China factor as much, since Bangladesh’s minister from the present government have been vociferous about China’s debt-traps. Bangladesh’s Finance Minister Mustafa Kamal recently warned the developing nations—that they must ‘think twice’ before taking loans through China’s Belt and Road Initiative, hinting at the plight of Sri Lankan economy.

When Bangladesh’s PM Sheikh Hasina was in India few days ago, India urged Bangladesh to let the radar installations be completed, which had been delayed due to Covid. India and Bangladesh had signed an MoU in 2019 regarding the same.

As soon as the CSS network comes to fruition, India will have a limitless power to keep an eye on the Indian Ocean Region. India now has a very clear vision of where it is headed. CSS is definitely about proving China wrong that Indian ocean is not India’s backyard. There’s a reason why Indian ocean has been named after India!

Sep 11, 2022
Maritime analysts need to take a chart of whatever scale and take a divider and comprehend distance or “space” as a quantity before penning such articles. The area of IOR vis-a-vis the ranges of detection of large ships, leave alone “sub 200m boats” must then be contextualised before hyperbole is resorted to. The Coastal Surveillance Scheme offers a close coast detection possibility to a range of about 25-30 NM at best. There is a HUGE space still left uncovered in IOR that needs to be covered before such “claims” are made by analysts. Needs much more hard work and “elbow grease” to “comprehend” maritime domain before such claims can be made. Just a word of caution to ensure the author “grows” to be a good analyst and not yet another run of the mill..!! Best…