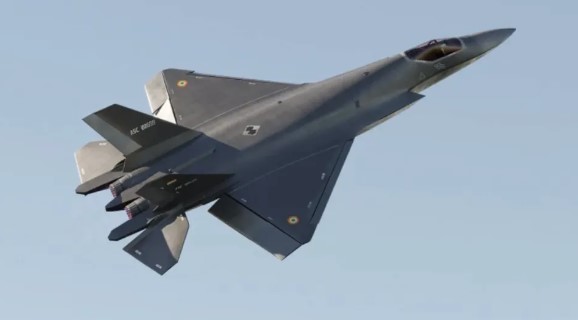 “Garuda is described as the King of the birds ….. a protector with the power to swiftly travel anywhere, ever vigilant…. Garuda is invoked as a symbol of …. violent force, speed, and martial prowess.”

The Advanced Medium Combat Aircraft (AMCA) is India’s vision to develop a  Fifth-Generation stealth, multirole, all-weather, air superiority fighter for the Indian Air Force (IAF) and the Indian Navy (IN). Designed by India’s Aeronautical Development Agency (ADA) with a development cost of approximately Rs. 15,000 Crores, the project is likely to evolve as a joint public-private partnership venture between HAL/ADA and selected private vendors, with an aim towards commencement of production by 2028 (https://chanakyaforum.com/lca-tejas-ready-to-touch-the-skies-with-glory/ ). The AMCA is slated to be equipped with advanced avionics and Artificial Intelligence (AI) controlled Multi-Sensor Data Fusion (MSDF) capabilities. The incorporation of stealth features and digital avionics along with other niche technologies would qualify any fighter aircraft platform including the AMCA as a Fifth Generation Fighter Aircraft (FGFA).

Why Does India Require a FGFA?

For any global or major regional power, it is imperative to stay ahead of the apparent threat in terms of the military capability of adversary Nations and India is no exception. It therefore inescapably augurs that our developing and importantly, indigenous military aviation technology, among others, is able to outperform that of Pakistan (the country has no FGFA) and match that of China (that of the J-20 FGFA  and its variants). Towards this aim, a need was felt to develop a FGFA with indigenous technology that would give a major operational filip to the IAF and IN fighter fleets and boost India’s military capability into the niche group of Nations who possess stealth fighters. FGFA also allow incorporation of niche global technologies, including operation and control of an unmanned wingman and incorporation of onboard Directed Energy Weapons (DEW) –  all sixth generation characteristics, contours of which were covered earlier @ https://chanakyaforum.com/the-unmanned-wingman/ and https://chanakyaforum.com/directed-energy-weapons1/. India’s aging fleet of the Anglo-French SEPECAT Jaguar Deep Penetration Strike Aircraft (DPSA)  and the French Mirage-2000 Air Superiority Fighter (ASF) would eventually require replacement. While the TEJAS Mark -II is identified as the replacement aircraft, larger portions of India’s fighter fleet would steadily have to give way to stealth-enabled platforms, which would gradually become the order of the day.   Economically, procurement of an off-the-shelf FGFA comes at a prohibitive cost (the average cost across variants of a single F-35 FGFA is approximately 960 Crores [armscontrolcenter.org], while the TEJAS 4th Generation LCA costs one-third of this at approximately Rs. 300 Crores!). This does not include the high cost of maintenance and future upgrades of a foreign platform. The operational and economic sense that stems from the above stimulants have therefore driven India to embark on its own FGFA program! 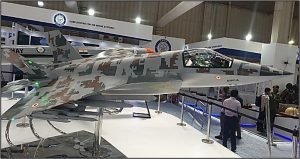 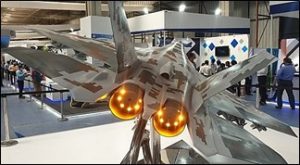 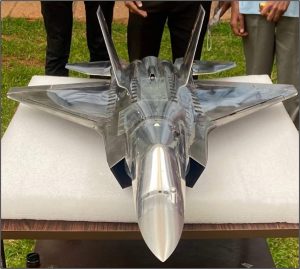 Presently, the AMCA Program has been constituted as a distinct corporate ‘entity’ Special Purpose Vehicle (SPV) – a public-private joint venture consortium that will include HAL and ADA as development agencies, three to four major private firms as primary manufacturing partners and major stakeholders and a number of Micro, Small and Medium Enterprises (MSME) as Tier-II manufacturing partners. Such an arrangement will allow pooling of expertise and previous experience in defence manufacturing and broaden the manufacturing base for quicker roll-out.  It is also envisaged that a ‘minimum order commitment’ will be extracted from the IAF and IN as an investment surety for these private sector players.

The AMCA will be manufactured under the aegis of the Tamil Nadu Defence Industrial Corridor at Sulur, Coimbatore. However, the initial five prototype aircraft are envisaged to be manufactured by HAL at Bengaluru, at an approximate cost of Rs. 900 Crores per piece (a figure that will reduce significantly during series production), with involvement of the private sector firms to gain expertise. Operational Clearance flight tests of the AMCA would take place at the Sulur Air Force Base, which is incidentally, the home of the first TEJAS LCA squadron!

Stealth Features. The initial prototype and Mark I variant will likely concentrate on ‘Geometric Stealth’, wherein low Radar Cross Section (RCS) and consequent stealth is achieved through aircraft design. Composite Radar Absorbent Material would also be used in the airframe. Inherent low radar signature is achieved by shoulder-mounted, blended, diamond-shaped, trapezoidal (straight-edged and tapered) wings and serrated edges, as well as Divertless Supersonic Intakes (DSI), which would serve to divert airflow away from the AMCA’s engine and serpentine (‘S’-shaped) air ducts with a ’bump’, which shield the engine fans against incident radar waves. The lack of canards on the AMCA will also reduce radar visibility. The internal weapons bay, an essential feature of an FGFA, would further boost stealth capabilities. The AMCA will also have a concealed air-to-air refuelling (AAR) intake. The aircraft would sport a conformal antenna, wherein the antenna elements would be aerodynamically aligned to the aircraft’s body. Radar absorbent paint will also contribute to low radar visibility. ADA has also claimed the aircraft will feature an ‘advanced’ radome which will probably incorporate ‘selective transparency’- only allowing the radar frequencies of the AESA radar to pass through it while blocking other emissions. Air-cooled exhaust will also assist in reducing the aircraft’s thermal signature.

Avionics and Sensor Package.  The all-glass cockpit of the AMCA would be equipped with a digital multi-function display and a wide-angle holographic head-up display. The AMCA will also be equipped with Hands-On Throttle-And-Stick (HOTAS) (wherein vital controls will be mounted on the throttle lever and flight-control stick) and voice-activated commands, lending to lower pilot fatigue and faster maneuverability. The AMCA is also likely to incorporate fly-by-optics (FBO) controls, wherein transmission of flight commands to control surfaces will take place through OFC, lending to higher responsiveness. The FGFA will crucially mount an ‘electronic pilot’ which will perform the role of the ‘mission pilot’, allowing the actual pilot to concentrate on flying the aircraft. The AMCA could also incorporate the capability of being optionally manned, for ground-controlled, pilotless flight. It is also likely to feature Automatic Take-Off/Landing capability, wherein the onboard avionics would control take-off /landing functions based on pre-set payload configurations, of course with manual over-ride.  Auto AAR capability is also a design feature. The AMCA is also likely to feature an automatic Collision Avoidance System, which will take over controls for air/ ground collision avoidance in case the pilot is incapacitated. The sensor package will be spearheaded by an improved version of the Uttam Active Electronically Scanned Array (AESA) Radar (currently also in use on the TEJAS LCA), with Gallium Nitride technology, the latter offering compactness, higher power efficiency, reduced power loss while switching between missions/ modes and better thermal insulation. This improved AESA radar is also likely to have the capability of mechanical steering, thus increasing the ‘detection swathe’. Pilot situational awareness will be achieved through airframe-mounted sensors for 360-degree visuals. Multi-sensor data fusion, the Missile Approach Warning System, Advanced Electronic Warfare (EW) Suite and the Integrated Vehicle Health Monitoring System for self-diagnosis and failure-warning, will all be AI assisted. The aircraft will mount an Integrated Infrared Search and Track (IRST) system for passive target acquisition.

Power Pack.  The AMCA Mark 1 will be powered by twin US General Electric GE414 Afterburning TurboFan Engines, each generating 98 kN of thrust, which are also slated to power the TEJAS LCA Mark II. These will be fed from the DSI. The AMCA Mark II would receive a more powerful 110 kN engine, either as a result of indigenous development or developed as a JV between DRDO’s Gas Turbine Research Establishment and a foreign firm (France’s Safran, which worked with HAL for the Shakti Engine of the Advanced Light Helicopter and UK’s Rolls-Royce being probables), while drawing on technological expertise from the now-shelved Kaveri Engine Program. The aircraft will also have ‘supercruise’ capability, wherein it would be capable of sustained supersonic flight without the use of afterburners, probably by way of variable bypass, wherein at lower speeds, airflow is increased to allow the engines to achieve greater thrust with minimum fuel and without afterburners. The AMCA will have fuel capacity of 6500 Kg for a 1600 Km combat radius, thus obviating the requirement of mounting additional drop-tanks, which will further contribute to low radar signature.  Necessary range enhancement would be achieved by AAR.

Characteristics & Armament.  Enumerated in the table below:- 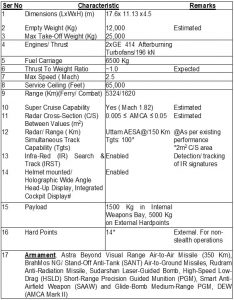 *Sourced in part from Wikipedia

Indigenous Content. In the present design of the AMCA Mark I, the entire sensor package, FBO and avionics would be indigenous, which accounts for a major portion of the component assemblies, less the power pack. In the AMCA Mark II, the indigenous/ near indigenous engines would boost the indigenous content even higher. This is in keeping with the imperative need for future self-reliance in the defence aerospace industry.

India’s AMCA Program promises to propel the country’s Armed Forces into a niche and rarefied space of stealth multi-role air superiority platforms, where only the US F-35 and F-22, Russia’s Su-57 and China’s J-20 exist at present. This would stamp India’s status as a global power capable of indigenously producing world-beating technology.