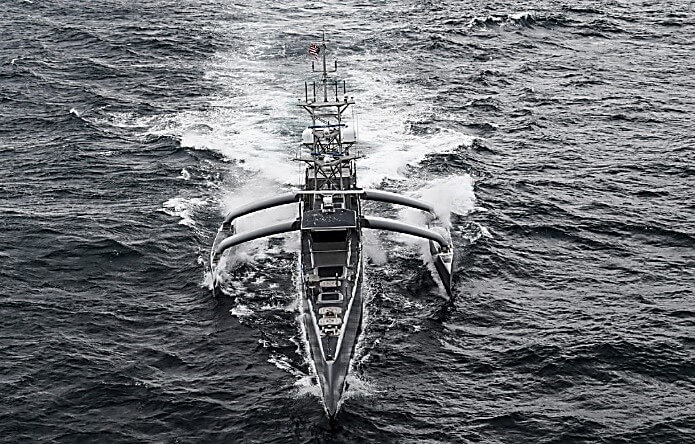 Hypothetical Scenario-25 August 2024.    In response to continued development of military infrastructure by China in the Paracel Islands in the South China Sea (SCS), the US Navy, in consonance with its Freedom of Navigation Operations (FONOPS), embarks the Sea-Hunter, a Medium Displacement Unmanned Surface Vehicle (MUSV) from the Hawaii Islands to patrol East of the Paracel Islands as part of routine training manoeuvers. The US thus exercises its Freedom of Navigation rights in the global maritime commons and challenging China’s maritime sovereignty claims in the SCS. This action seeks to enforce the ‘right of innocent passage through territorial waters’. China’s appeal to the UN against this action by a US warship, which it terms as belligerent, is challenged by the US, which quotes Article 29 of UN Convention of Laws of the Sea (UNCLOS) wherein the definition of a ‘warship’ includes a vessel physically ‘manned by a crew’.

The above scenario brings to the fore one of the crucial roles that can be assigned to a Maritime Unmanned System (MUS), at a far lower cost and without risk to human life- the latter itself being a regulator against conflict escalation.

What is a MUS? A simplified definition of MUS would include all unmanned maritime vehicles, which in turn includes unmanned surface and sub-surface platforms along with integrated sensors/payloads and onboard support infrastructure required to accomplish assigned maritime missions. 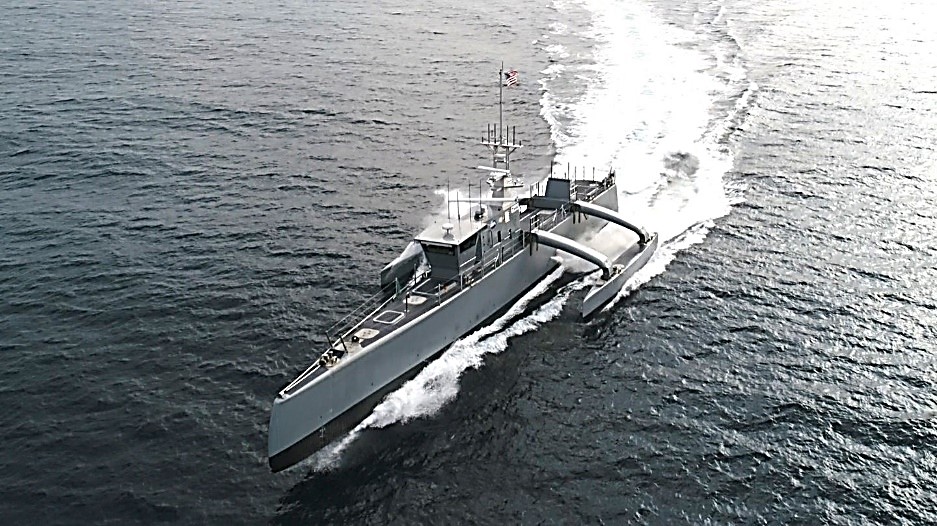 The Sea Hunter Maritime Unmanned System (MUS) of the US: Source-warontherocks/thedrive

What are the Prerequisites for Autonomous Operation of a MUS?

According to the Maritime Unmanned Navigation through Intelligence in Networks (MUNIN) Project, the following systems would be required for such operation:-

(a)      A navigation sensor module capable of Multi-Sensor Data Fusion (MSDF), an Automatic Identification System (AIS) which allows the platform to identify other crafts/obstacles and payload for 24-hour imagery.

(b)      A navigation system capable of modifying planned routes to avoid obstacles/ encounters and cater for rough weather.

(c)      An autonomous engine and monitoring/control system with the ability to predict/ detect machine failure and adjust performance to enhance reliability.

What is the Envisaged Employment Profile of MUS?

The North Atlantic Treaty Organisation (NATO) Factsheet of October 2021 opines that MUS support the transition from large and expensive fleet platforms to fleets of autonomous systems supporting and working together with manned assets, which can make Navies more versatile and capable.

The factsheet identifies MUS tasks, which include mine detection & clearance, protection of Sea Lines of Communication (SLOCs) and long-distance undersea cables, maritime domain awareness (MDA) and detecting/tracking hostile submarines- all of these at a fraction of the operational costs and no risk to human life!

MUS could be employed as part of a fleet for ISR operations over a large swathe of sea, while being networked to each other and to other manned platforms. The battle-mosaic so created would help operational commanders plan conflict-avoidance or other apt tasks for manned vessels. MUS could be used for ASW operations in order to thwart sub-surface threat to fleet /merchant vessels and also as decoys by generating false electronic  signatures. In offensive role, these platforms could be used to neutralise adversary platforms either by soft-kill (jamming radar/ electronics) or by kinetic kill. Large numbers of such cost-effective MUS could conversely pose a decision dilemma to enemy maritime commanders with respect to time and location of deployment of scarce manned assets to counter such a threat.

While operation of MUS is desirable for the plethora of advantages described above, development of these systems is a complex process. Apropos, while Navies around the world already employ Unmanned Underwater Vehicles (UUV), global development in Unmanned Surface Vehicle (USV) MUS is still a niche domain, with a handful of countries making mentionable strides, some of which are mentioned below:-

The US Navy (USN) was provided with a USV in the late 1990s under the name of the  ‘Owl’, which was a jet-boat chassis equipped with a low-profile hull for increased stealth and payload capability. One version with side-scan SONAR and a video camera has been in operational use in the Persian Gulf.

Defense Advanced Research Projects Agency (DARPA) launched the Sea-Hunter Autonomous USV(AUSV) (featured above) in 2016, initially as an anti-submarine USV. In late 2018/early 2019, the Sea-Hunter  demonstrated its capability for long-distance navigation, traversing the North Pacific Ocean over a journey of 8300 km!  In the anti-submarine role, Sea-Hunter and its future variants (Sea-Hunter II is under development) would offer cost-effective options for monitoring and carrying out round-the-clock tracking of foreign submarines over large areas. The AUSV has a range of up to 19,000 km with likely endurance of 70-90 days and is capable of operating in extremely rough seas. It can patrol autonomously, using electro-optical (EO) sensors and radar to avoid obstacles and other vessels. The AUSV is equipped for ASW and mine countermeasure (MCM) tasks.

The USN is also developing Large Unmanned Surface Vessels (LUSV) and improved Medium Unmanned Surface Vessels (MUSV), scheduled to be fielded in 2022, for a wider mission profile. The LUSV, wherein US$ 7 Million contracts each have been awarded to six manufacturers for research, are envisioned as “arsenal ships”- more offensive in nature, armed with anti-ship and land-attack missiles and linked together with various manned/unmanned platforms, while the MUSV will mount ISR and Electronic Warfare (EW) payloads. Both these programs are initially set to be ‘crew- optional’ to allow for a period of manned operation till the technology stabilises.

DARPA has also launched the ASW Continuous Trail Unmanned Vessel (ACTUV) Program for developing a MUS to track quiet diesel-electric submarines (DES). The program is structured around the requirement for superiority in propulsion to existing DES of potential adversaries, intelligent autonomous capability for high-seas navigation, ‘intelligent’ interaction with maritime vessels of other countries and compliance with existing statutes including UNCLOS!

UK’s fully autonomous Seagull MUS provides both surface and sub-surface mission options. It can be deployed from shore/mother-ship and can operate at cruising speed for four complete days.  The Seagull is capable of operation in manned/unmanned modes. It uses SATCOM data-links and an integrated navigation, sailing & safety suite. It mounts an integrated mini-Unmanned Aerial System (UAS). It also mounts Electronic Support/Counter Measures (ESM/ECM), EO sensors and expendable mine-disposal vehicles. Its MCM capabilities allow it to detect and identify various types of mines and navigate out of deployed minefields. The Seagull  has enhanced submarine detection capabilities as part of its ASW suite. It is armed with a 12.7 mm Remote Controlled Weapons Station (RCWS), torpedo tubes and a non-lethal weapon system. 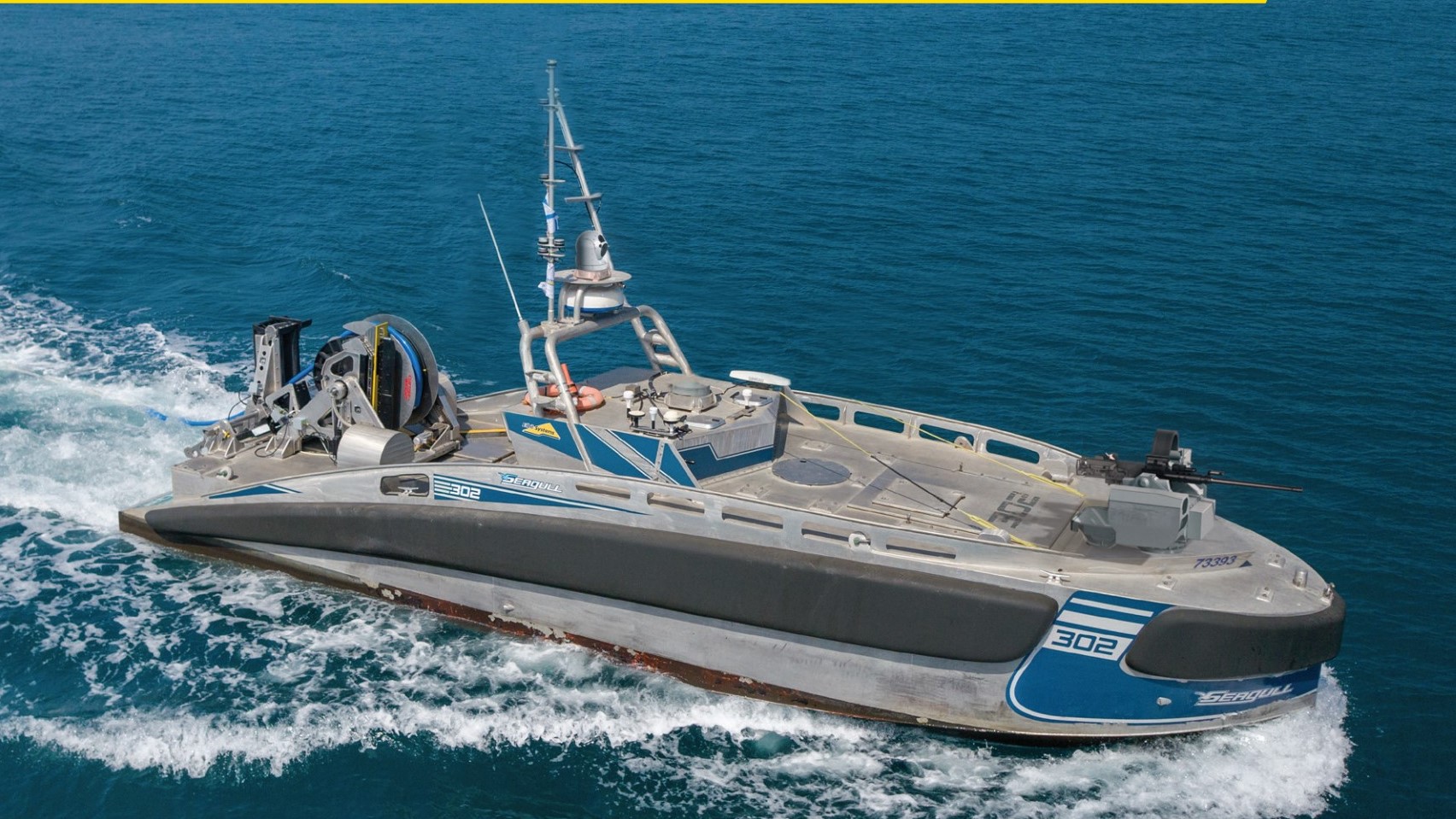 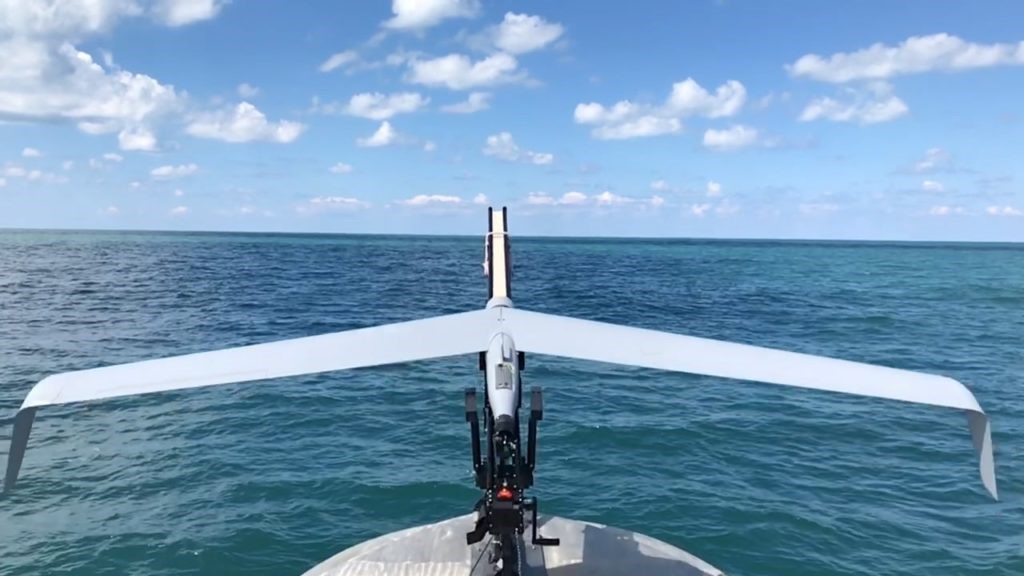 UK’s RNMB Harrier MCM AUSV is capable of manned, remote and autonomous operation. It can deploy towed Side-Scan SONAR systems or Autonomous UUV (AUV).  The MUS can be quickly deployed for survey/mine-hunting operations. The AUSV is part of a trio of AUSVs, with delivery completed in June this year. 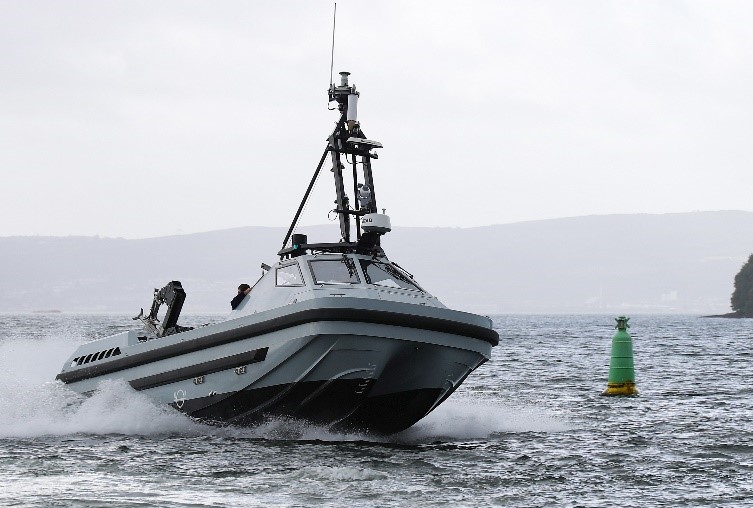 China tested several Cutter (fast boats) USVs in the SCS in 2018, wherein these boats successfully demonstrated remote/autonomous control and obstacle avoidance. The Jiangsu Automation Research Institute (JARI) MUSV, with a cruising range of close to 1000 km and a speed of 77 kmph was inducted into the PLA Navy (PLAN) in late 2019. Its multi-function 3D Active Phased Array Radar gives it 360º coverage, while mast-mounted EO systems help in target detection. The USV can also be fitted with SONAR for ASW. It is armed with a 30mm RCWS and can be fitted with rocket pods or torpedo launchers. It can intercept underwater, surface or air targets depending on the installed payload. The relatively lesser range could imply that the MUSV is used for patrolling territorial waters and proximal island territories. 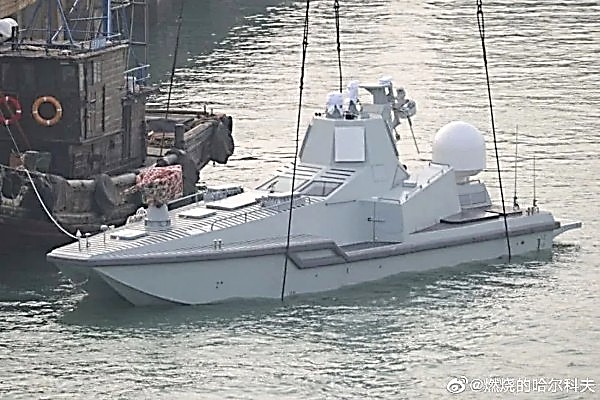 As with other Navies, Russia has also developed unmanned Cutters  for its Navy.  The Cutter Iskatel was showcased at the 8th International Maritime Defence Show-2017. It has a speed of 46 kmph. The EO monitoring system of the USV  is capable of detecting/tracking surface objects at 5 km. Russia has also launched the Pioneer-M with ‘crewless navigation technology’- tasked to operate in the Black Sea region for patrolling of littoral waters. There are also plans to retrofit in-service vessels as USVs for remote/autonomous operation. The Russian Navy also plans to employ small USVs/UUVs in swarms to eliminate maritime targets, with credence to the dictum that ‘quantity is the new quality’. The Russian Navy also plans to mount USVs on Alexandrit Class minesweepers for high-seas deployment. These USVs are based on BL-680 high-speed inflatable boats. 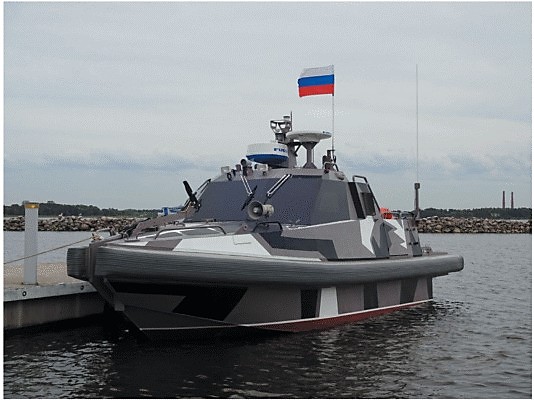 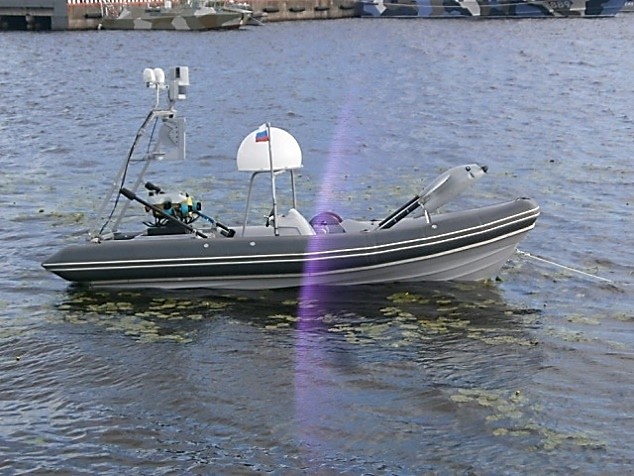 Turkey has developed the ALBATROS Class of high-speed USV Target Boats for its Navy. It has also developed an Armed USV called Ulaq, which can be deployed from surface warships and can be controlled remotely. The Ulaq, with a cruising range of 400 km and a speed of 65 kmph, is capable of ISR missions and is armed for surface operations in six different variants, to include surface-combat, anti-ship, ISR & EW, ASW and firefighting versions. 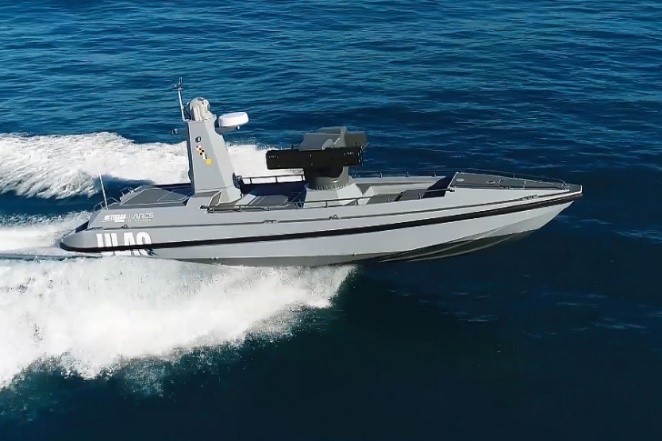 The necessity for augmenting coastal security has seen the inclusion of USV for ‘investigation of contacts and patrolling’ in the Indian Armed Forces’ Technology Perspective and Capability Roadmap (TPCR), a vision document for capability building uptil 2027. This document also underlines the importance of acquisition of UUVs for ASW and mine-clearance operations. The Indian Navy (IN) is also seeking to acquire unmanned survey vessels. These unmanned platforms (including underwater remotely-operated vehicles in service with the IN)  would be expected to enhance capabilities for surveillance/patrolling in India’s territorial waters and aid in boosting India’s status as a net security provider in the Indian Ocean Region. Actual fructification of such acquisitions in the desired numbers may however take some time.

Sagar Defence, a Mumbai based start-up, who have already entered into a contract with the IN for deck-launched UAVs, have developed the autonomous Unmanned Marine Surface Vehicle (UMSV) for the IN, which is capable of collecting and communicating maritime data to satellite/shore & sea-based platforms in real-time, while operating  through unfavourable weather/sea conditions. The firm is also working towards development of three AUSVs for the IN for ISR operations and is also selected for development of UUV swarms. Incidentally, the IN is seeking to acquire man-portable [10-20 hours], lightweight [2 days], heavy-weight [3 to 4 days]  and high-endurance [15 days] endurance autonomous UUVs (UUVs have been briefly covered @ Chanakya Forum https://chanakyaforum.com/maritime-reconnaissance-platforms-key-to-multi-domain-awareness/). L&T is also developing AUVs, which were displayed during DefExpo 2020. Several other start-ups are also entering the field, encouraged by the Indian Government’s push towards self-reliance. 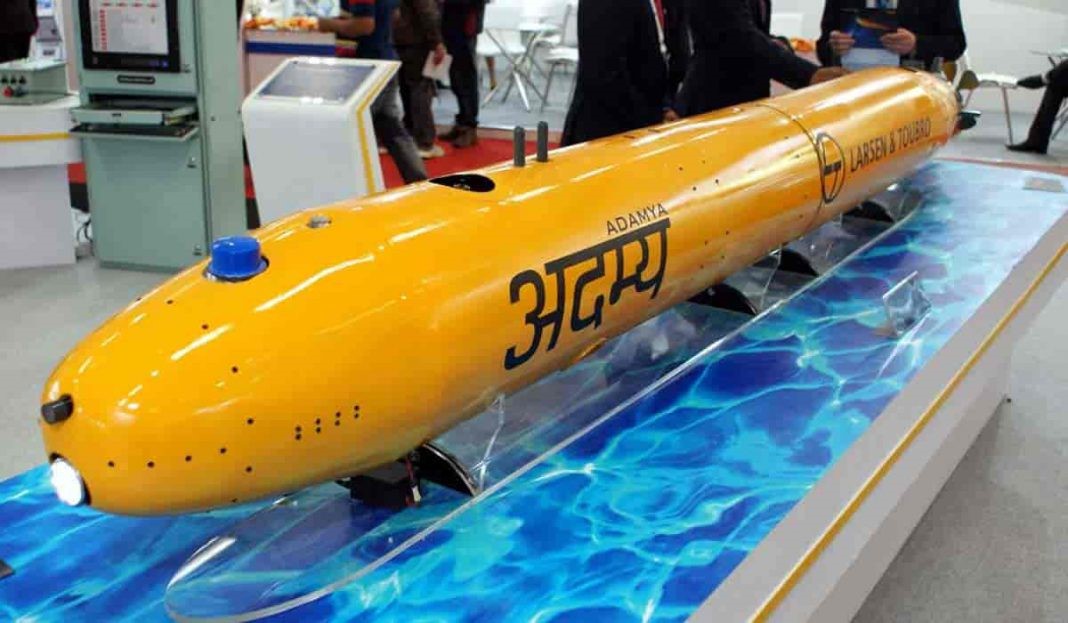 In an era where territorial and fiscal ambitions of littoral Nations spread far beyond their proximal waters, the challenges of safeguarding ever-expanding areas of interest in the ocean domain are inevitable. To add to this imbroglio is the inordinately high, if not prohibitive cost of frontline surface men-o-war. This conundrum is best addressed by developing or acquiring low-cost and versatile unmanned systems to fill gaps in the maritime footprint, with multifarious role capability, from maritime ISR to lethal operations.