Insurgents of Northeast – Between Devil and Deep Sea 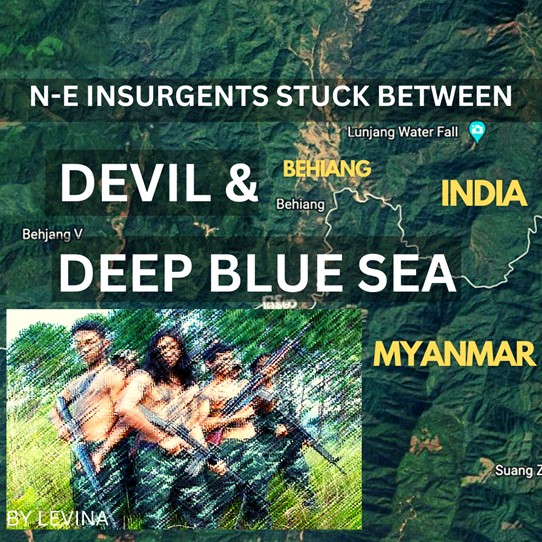 India’s northeast is undergoing a colossal change!  The region is witnessing massive infrastructure development to improve connectivity as it is hard to reach swathes of forests. This is being done not just to facilitate the blossoming tourism of the region but also for security reasons. The developments face threats from proscribed terrorist groups of the region. However, the good news is that the insurgents themselves are now stuck between the devil and the deep blue sea.

Insurgency in Northeast India, which was being fueled by India’s adversaries, has reached that stage where insurgents are neither safe inside India nor outside it. After the military coup in Myanmar in Feb 2021, insurgent groups from s Northeast India made a deal with Myanmar army/Tatmadaw to fight along with them against the pro-democratic faction (like People’s Defense Forces, PDF) and the other groups considered rebels by the Myanmar army.

This dalliance of Tatmadaw and insurgent groups has been reported not just by Indian media but also by international media houses. The rebarbative deal earned Indian insurgent groups wrath of pro-democracy factions in Myanmar and consequently VBIGS, a collaboration of multiple insurgent groups, are being stifled both in India and Myanmar.

On December 27,2022, Myanmar was abuzz with the news of an ambush by pro-democratic forces against a group of people. Seven men including an officer (self-styled) belonging to an ally of Myanmar army, called SNA or the Shanni Nationalities Army (red), were killed in the incident. It took place at a location between Myothit and Mintha, on friendship road, close to India’s border. The attack was claimed by Kuki national army, a group that has been involved in armed confrontations against Tatmadaw. 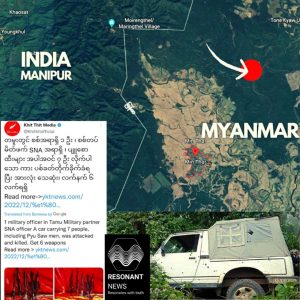 The ambush site at Min Thar, Myanmar, report by Myanmar media and the Gypsy in which 7 SNA men were killed

In another such incident which took place on January 4,2023, two senior officers (self-styled) of UNLF were killed in Khenman, Myanmar. This incident happened just a few kilometers away from India’s border. One of the men killed was recruited in 90’s, and the other was the blue-eyed boy of former NSCN (K) chairman, Khaplang. 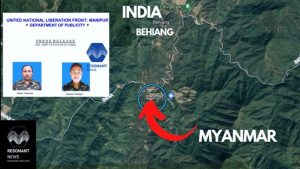 The 2 senior cadre of UNLF who were killed on Jan 4th ambush; the attack was carried out opposite to Behiang in Khenman Myanmar.

UNLF, the United National Liberation Front also known as the United National Liberation Front of Manipur, is an insurgent group which came into existence 58 years ago, making it one of the oldest insurgent organizations in Northeast India. UNLF and NSCN (K) had collaborated to carry out an ambush on Indian army’s convoy belonging to 6 Dogra Regiment in Chandel district (Manipur ) on  June 4, 2015, resulting in the loss of life of 18 soldiers. A few days later Indian army replied with an attack on the terrorist camp inside the jungles of Myanmar in which 120 insurgents were eliminated.

After the attack on the Indian convoy, NSCN (K) along with some other insurgent groups, was declared a terrorist group by Indian Government in 2015.

The attack on convoy of 46 Assam Rifles (AR) was originally claimed by Manipur based PLA (People’s Liberation Army). It was executed to whittle down Indian government’s attempt to curb drugs and arms smuggling in Northeast. Author had posted an article on the drug smuggling in Northeast, you can read it here. An Internal Security Challenge Brewing in the Northeast

Death of two of its senior cadres is a huge loss to UNLF. But this isn’t the first time the insurgent groups from Northeast India have been attacked by pro-democratic groups inside Myanmar. Since the military coup in Feb 2021 in Myanmar, Indian insurgents collaborating with Tatmadaw have been under multiple attacks.

Soon after these losses many insurgents had surrendered to Indian Government whilst there were also rumours of surging rebellions inside insurgent groups.

Both the recent incidents which took place on December 27 and on January 4, come with certain lessons for our misguided Meitei brethren residing in Myanmar.

Meitei people are an ethnic group native to Manipur state in Northeast India and often called the Manipuri people. India’s neighbouring country Myanmar is home to a sizeable community of Meitei, who are called ‘Kathe’ in Burmese.

There are several insurgent groups in Northeast, but Manipur is the potboiler, as many call it. Manipur has 7 active outfits which are called VBIGs or valley-based insurgent groups by the Indian security forces. This includes — the People’s Liberation Army of Manipur (PLA-MP), the United National Liberation Front of Manipur (UNLF), the United People’s Party of Kangleipak (UPPK), People’s Revolutionary Party of Kangleipak (PREPAK), the Kanglei Yawol Kanna Lup (KYKL) and the Kanleipak Communist Party (KCP). These groups have close ties to NSCN (K) which is a Naga group.

VBIGs primarily comprise of the Meitei community. Armed groups from the Meitei community of Manipur active in Myanmar, such as the People’s liberation army (PLA), are banned in India. The seven groups together call themselves the JFF (Joint Fighting Force).

After the strike by Indian Commandos at the NSCN (K) terrorist camp in 2015, the insurgent groups have been shifting their terrorist camps regularly to avoid any attack from the Indian side.

Meanwhile, despite many attempts to make peace by the Indian government, insurgents have continued their nefarious activities like extortions in Manipur, arms and drug smuggling inside India.

According to reports these insurgent groups together have about 700-800 members. Majority of their illegal activities are carried out in Manipur, albeit they are mostly based in camps in Myanmar. Maintaining these terrorist camps in the jungles of Myanmar comes at a cost; each camp pays a hefty sum in US dollars to the Myanmar army.

As Indian defence forces began a massive crackdown against the arms and drug smuggling in Northeast, the insurgent groups faced a crunch in their earnings. Ergo, when the Myanmar army offered VBIGs to fight as their mercenaries against pro-democratic forces, they obliged.

Ostensibly Tatmadaw demanded not just extra money to maintain terrorist camps but as many as 30 cadre from each camp to fight along with them. The conditions were accepted by the VBIGs!

After the groups collaborated with Tatmadaw and began targeting the innocents within Myanmar, VBIGs lost the support of locals there. As expected, pro-democratic and anti-Myanmar army groups like Tamu Security Group (TSG), and Kuki National Army released statements warning Meitei insurgents of VBIGs, who support or work with the Tatmadaw, not to fight the local people’s defense forces. Soon after the warnings multiple ambushes on the insurgent groups followed.

The two recent incidents have added to the confusion and chaos among the cadres of VBIGs. In August 2022, it was reported that two young Meitei rebels who fled the camp after refusing to fight the local PDF were captured by their groups and were tortured to death. This shows VBIGs are now on tenterhooks, and they won’t spare their own cadre if order to fight for Myanmar Army is not followed.

China has been one of major contributor of funds for VBIGs. Soon after its inception UNLF developed a relationship with China while simultaneously continuing its relations with Pakistan. As early as 1975, UNLF’s then leader N. Bisheswar Singh and 16 other Meitei rebels had visited Lhasa to seek Chinese assistance. This is true for other groups like PLA, who according to recent reports are regrouping in the borderlands of China’s Yunnan province. China’s intentions were made very clear by a CCP member who was quoted by Global Times as saying—”If India supports Taiwan’s independence, then China has every reason to support separatist forces in northeast Indian states”. Author had earlier posted an article on China’s contribution to such groups in India’s Northeast. You can read it here: Teenage Terrorists of PLA in Manipur and the China Angle

The persistent action by Indian Defence Forces against the drug menace in Northeast whittling down the funding of VBIG groups, in addition to the heightened security along the borders has pushed the insurgent groups to a corner. Adding to their woes is the fact that their false sense of security in the camps of Myanmar Jungles has also been destroyed by the pro democratic groups inside Myanmar. This is the right time for the Meitei insurgents to drop their arms and choose peace.