India’s Nuclear Policy of ‘No First Use’ behoves that the Nation is prepared to absorb a first strike and still retain capabilities for similar retaliation. Retaining such ‘second-strike’ capability will necessitate that India deploys an effective missile-defence shield in order to thwart some or all of hostile inbound vectors before they can do any semblance of damage, either to the Country’s infrastructure or war-waging machinery.

02 November 2022. In a stratospheric jump in achieving Ballistic Missile Defence (BMD) capability, India’s DRDO successfully tested the AD-1 Interceptor Missile, which contributes to the first half of Phase 2 of India’s BMD System. The AD-1 would be capable of intercepting and destroying Intermediate Range Ballistic Missiles (IRBM) like Pakistan’s Ghauri and Shaheen Missiles and China’s Dongfeng (DF)-21. The second half of Phase 2 of BMD, the AD-2 Interceptor Missile, with cruise missile interception capability, is still under development. 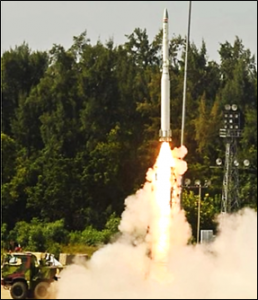 The Indian BMD Program (BMDP) was launched in the aftermath of the 1999 Kargil War and is aimed towards developing a multi-layered BMD System to accord protection to India from ballistic missile attacks. Under the BMDP, India seeks to deploy a functional BMD, incorporating both low and high altitude interceptor missiles. In Phase 1, the outer layer for high-altitude interception currently consists of Prithvi Air Defence (PAD) Hypersonic Missile Interceptor, with an operational range of 300 to 2000 Km, which can intercept and destroy missiles at altitudes of 50 to 180 Km. The PAD consists of a solid-fuelled first stage and a liquid-fuelled second stage. The Interceptor mounts an active phased array radar with the capability to track 200 targets at a range of 600 km. The first live-firing test of the PAD was conducted in November 2006  in which it successfully intercepted a Prithvi-II Ballistic Missile at an altitude of 50 km. This Prithvi-II Missile was modified to mimic the trajectory of China’s nuclear-capable M-11 (export version of DF-11 Short-Range Ballistic Missile). This made India only the fourth country in the world to have successfully developed and tested a BMD System! A second PAD test against a Dhanush Missile (ship-launched variant of Prithvi) was carried out on 06 March 2009, with missile tracking carried out by the Swordfish Radar and successful interception and destruction achieved at an altitude of 75 Km! The second or inner layer for low-altitude interception, is the Advanced Air Defence (AAD) Supersonic Missile Interceptor (SMI), which is designed with a single-stage solid-fuel motor, with an operational range of 200 Km, to intercept and neutralise hostile missiles in the endo-atmosphere at altitudes of 15 to 40 kilometres and at speeds below Mach 5. The AAD SMI mounts an Inertial Navigation System and relies on trajectory updates from ground-based tracking radars. The Interceptor utilises active radar homing in the terminal phase for interception. The AAD was successfully tested in December 2007 and then on 06 March 2011 from the Integrated Test Range at Chandipur, Odisha, wherein it successfully intercepted and destroyed a modified Prithvi, acting as a target missile. AAD Interceptors with improved accuracy and manoeuvrability were subsequently tested twice in 2015 and later in May 2016, December 2017 and August 2018- the last instance witnessing the successful interception and destruction of one of multiple incoming targets simulating an inbound hostile IRBM. Development of Phase 1 of the BMD is presently deemed to be complete.

Short-Range Interception in the BMD (as distinct from Point Air Defence [AD] provided by AD guns, shoulder-fired missiles and other short-range AD weapon systems) will be achieved by vectors like the Akash Surface-to-Air Missile (SAM). Akash is a road-mobile SAM system mounted on a self-propelled (wheeled/ tracked) Akash Launcher and can be deployed in single/multiple battery configurations to achieve a kill-probability as high as 95%! Akash forms part of the inventory of the Indian Air Force (IAF) as well as the Indian Army (IA). Among the improved variants, the Akash New-Generation (NG) SAM is equipped with a solid-fuel rocket motor, with increased reliability and enhanced range upto 70 Km. The NG variant mounts an Active Electronically Scanned Array (AESA) Multi-Function Radar. It is also equipped with an improved proximity fuze which can carry out optical detection of the target. The Akash Prime variant is primarily designed for the IA and has a maximum range of upto 50 Km. It is mounted with an active radio-frequency target seeker with a target lock-on range of approximately 15 Km to enhance kill-probability. This variant has been tailored to suit the high-altitude, low-temperature conditions prevalent along India’s borders, especially along the Line of Control against Pakistan and the Line of Actual Control opposite China.

The IA has since operationalised two Akash Regiments, with two additional regiments of Akash Prime ordered in 2019. The IAF had sought acquisition of 1000 SAMs @ 125 SAMs per squadron. Delivery of eight squadrons for the IAF, deployed across the country, is reportedly completed (read about the Akash SAM in detail @ https://chanakyaforum.com/akash-boosting-indias-ground-based-interception/).

The BMD shield includes the Russian S-400 Triumf AD System, which has also been covered in an earlier article @ https://chanakyaforum.com/s-400-triumf-transforming-indias-air-defence/ .

The AD-1 is a long-range interceptor missile designed for both low exo-atmospheric and endo-atmospheric interception of long-range ballistic missiles with ranges upto 3000 Km as well as aircraft, especially adversary’s high-value Airborne Early Warning & Control Aircraft. This is so since the manoeuvrability of AD-1 would rely predominantly on aerodynamic control surfaces and not rocket thrusters, the latter being essential for exo-atmospheric manoeuvring. It is propelled by a two-stage solid-fuel motor and equipped with an indigenously-developed advanced control system, navigation and guidance algorithm to precisely guide the vehicle to the target-an essential pre-requisite to achieve an intersectory flight path with an incoming high-velocity ballistic missile! True ICBMs, with ranges upto/over 5000 Km and apogees well clear of earth’s atmosphere would need an exo-atmospheric interceptor with thrust vector control/ onboard rocket thrusters to manoeuvre in a near-vacuum environment- this requirement is likely to be met by the under-development AD-2 Interceptor, as part of Phase 2 of BMD.

Phase 2 of BMD will also need enhanced detection ranges and therefore longer-range, over-the-horizon (OTH) target acquisition/tracking radars. The interceptors themselves will need to have hypersonic capability (speeds greater than Mach 5)  with high manoeuvrability and the ability to counter any foreseeable/ deployable interceptor countermeasures onboard such ballistic missiles. DRDO is developing an OTH tracking radar for BMD Phase 2, which would be based on the Swordfish Long-Range Tracking Radar (LRTR), a derivative of the Israeli EL/M-2080 Green Pine long-range radar. The LRTR would carry out target acquisition and fire-control for the vectors of the BMD. It is capable of providing exo-atmospheric guidance to BMD missiles at altitudes over 80 Km and can simultaneously detect and track 200 hypersonic targets! The range of the LRTR is being upgraded to 1500 Km by DRDO. True to India’s theme of ‘Atmanirbharta in Defence’, the radar will feature over 80% indigenous components, including transmit/ receive modules, signal processors, computing system and power pack!

The system architecture of the BMD Phase 2 would consist of launch vehicles, commanded from Launch Control Centres (LCC) distributed over a wide geographical area to reduce response time. The LCCs, along with Early Warning Radars, would in turn be linked to a Mission Control Centre (MCC). The entire system would be interconnected over secure, redundant communication links over multiple media, forming a Wide Area Network. Based on inputs from the EW radars, the MCC would carry out target identification/ classification, target-interceptor matching and assign targets to LCCs. The MCC would also carry out post-interception assessment to confirm neutralisation of the inbound hostile vector. 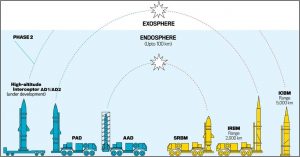 Phase 1 of BMD (PAD/AAD) is scheduled to be replaced by PDV, which is under development by DRDO. The PDV would be a two-stage solid-fuelled Interceptor. Three successful tests were conducted in April 2014, February 2017 and February 2019. On 27 March 2019, India carried out Mission Shakti, to test an anti-satellite weapon, wherein a Low-Earth Orbit satellite was intercepted by the kinetic interceptor of the PDV. The missile was named PDV Mark 2, a 13 m tall, three-stage Interceptor weighing close to 19 tons, with solid-fuel motors making up the first two stages and the kinetic kill vehicle constituting the third stage. The PDV Mark 2 uses an Imaging Infra-Red Seeker to home in onto the target and is capable of exo-atmospheric interception[1]. Further improved variants are likely to be capable of intercepting Inter-Continental Ballistic Missiles (ICBM), thus completing the BMD. The PDV Mark 2 is presently ready for Limited Series Production. 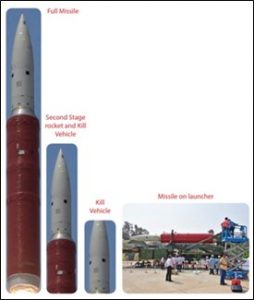 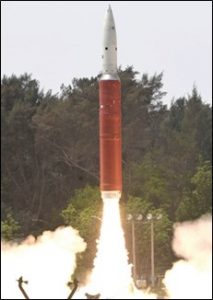 While the above missile components of the BMD System in their present form would lack efficacy against cruise missiles, the Akash/Medium Range Surface to Air Missile (MRSAM) and their variants would cater for such vectors and therefore would also form part of the holistic AD/missile shield of the country.  An effective BMD shield over India would also provide an apt foil to China’s Anti-Access Area-Denial strategy. Greater incorporation of layered BMD and improving the kill-probability of its vectors would ensure far-reaching regional security, both in time and space, for the Indian Nation.