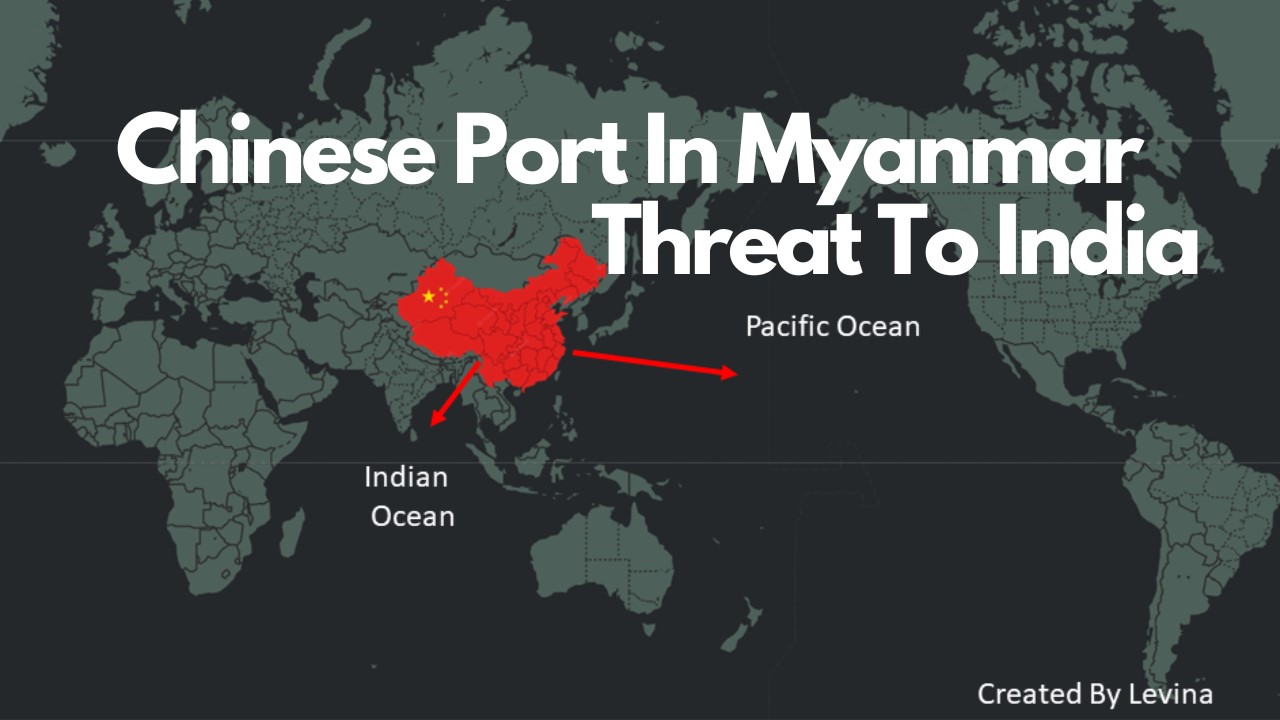 China has found the shortest possible entry into Indian Ocean to circumvent the traps laid by QUAD. India’s eastern belligerent neighbour China has expedited its work in the Kyaukpyu dual purpose port. This port may soon bear the footprint of Chinese Navy which could lead to a redrawing of the security architecture around the Indian Ocean, which is a concern for India and should be a concern for the West.

Why Kyaukpyu port is Perilous to India?

The port is located on the western coast of Myanmar and is part of a Special Economic Zone (SEZ) and China-Myanmar Economic Corridor (CMEC). When developed this will not be far away from INS Varsha, a submarine base, India is developing on its east coast, close to Vishakhapatnam. 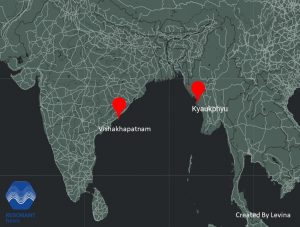 Negotiations on Kyaukpyu port predate the famous Belt and Road Initiative (BRI); the Chinese conglomerate CITIC had signed initial memorandums of understanding (MOUs) for the port project and a railway connecting the SEZ to southern China in 2009.

On India’s west, since sometime China has been using Pakistan to expand its most ambitious project called CPEC (China-Pak Economic Corridor) which will be part of BRI. But CMEC in India’s east demands greater attention as China’s presence in this lawless country of Myanmar has surged tremendously after the military coup last year, which in all likelihood was carried out to get rid of a democratic government which was not falling to Chinese demands.

Now China has a free run in Myanmar after the coup as there is no one to stop them and this is unlike Pakistan, which still has a functional government, and remains constantly under American and Indian radar.

Kyaukpyu port is China’s back door entry into Indian Ocean!

China already controls part of Hambantota port in Sri Lanka, and Gwadar port in Pakistan. Both ports are used by Chinese for its civilian and military ships. The third port which will soon be accessible to China will be in Myanmar and that too will serve dual purpose.

Why is Kyaukpyu Important for China?

To understand China, one must comprehend two of its strategies

The 2-ocean strategy in its simplest definition focuses on ensuring China’s easy access to the Indian Ocean and the Pacific in order to break with what China perceives as the encirclement of its borders. 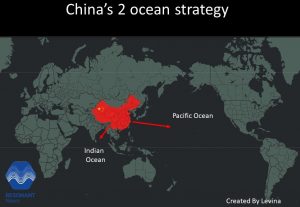 China’s Malacca Dilemma is also about its free movement in the ocean but specifically in the Malacca strait. It’s about the choke point or a narrow region in the sea in Malacca through which all the Chinese civilian and military ships including submarines are forced to pass as China doesn’t have a better access to Indian Ocean.

So US, Japan and India had created a network of submarine detection system from South China sea to Andaman to keep a tab of Chinese activities. This network is called SOSUS— Sound Surveillance System. 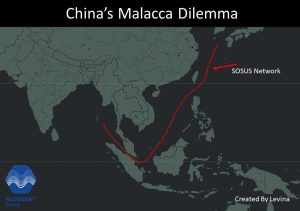 The SOSUS network had been stifling Chinese trade and it had been feeling suffocated as movements of ships and vessels were being monitored continuously. Ergo it came up with a plan to circumvent the trap by QUAD.

Plan A of course was accessing Indian Ocean through Pakistan, but the terrain in Gilgit Baltistan is unfriendly and America’s heavy presence in Pakistan and Afghanistan region kept the Chinese on tenterhooks.

This led them to also push for an alternative route which was less risky and Myanmar fits that bracket. A lawless country which has been in the thick of chaos since decades and has largely been ignored by West. Myanmar became their Plan B!

China decided to pass BRI through Myanmar and they came up with BRI corridor’s “jewel in the crown”, which is a dual purpose deep-sea port to be built at Kyaukphyu, on Myanmar’s west coast, at an estimated cost of $7 billion. Plans for the Kyaukphyu Special Economic Zone or KP SEZ project were first announced in 2013. The project is also called CMEC, just like CPEC in Pakistan. The CMEC is a 1700-kilometer, inverted y-shape corridor. 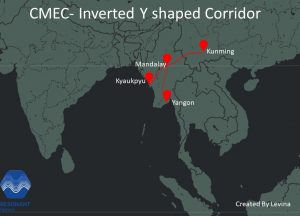 Kyaukphyu is the site where the Sino-Myanmar pipelines originate. This caters to China’s energy needs. The gas-fired power plants with a combined capacity of around 300 Megawatts is being built here, which will be connected with a 1400-km high-speed Kunming-Muse-Mandalay-Kyaukphyu railroad linking the KP SEZ with China, making it the shortest and most economical path between China and India.

Many think tanks from Myanmar report that China’s biggest hurdle in Myanmar was the democratic government which was toppled. China could not have asked for more. It was reported that in 2019, China had grudgingly accepted many conditions by the Myanmar government. Then in January 2020 Chinese President visited Myanmar. The meeting took place just a few weeks before the world went into a shocking lockdown.

What are the Military Implications of CMEC?

CMEC will enable China’s Navy, the People’s Liberation Army Navy (PLAN), to monitor India in the Bay of Bengal. Ostensibly by the year 2030, PLAN or the Chinese Navy will have 67 new major ships and 12 new nuclear-powered submarines, enough to control the Indian Ocean, according to US Naval Intelligence.

There are also reports that as many as 125 foreign vessels can be present at any given time in the Indian Ocean, and that will be the greatest number of vessels to be present in the region since World War II.

Yes, the situation is alarming!

Indian government is preparing a gamut of counters and one of them is SAGAR. The acronym SAGAR stands for –Security and Growth for All in the Region.  Since the first usage of the phrase in 2015 at Port Louis by Indian Prime Minister Narendra Modi, the term has been adapted to include more elements such as linkages with the Indo-Pacific region.

SAGAR involves increasing maritime domain awareness. This is implemented through the Integrated Coastal Surveillance System. Coastal radar systems have been sponsored by India and put up in many countries along the Indian Ocean.

So while SAGAR is part of India’s official policy, India has not revealed much about it. The author has written more about it in the article here. Tightening the Noose Around Chinese Ships: India’s Coastal Surveillance System & SAGAR Policy 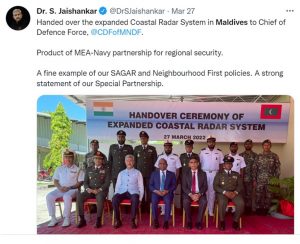 India has been expediting its ways to counter China’s maneuvers in Indian ocean, but the reality is that India doesn’t have big pockets like China to influence all its neighbours. Developmental projects by India in Myanmar have slowed down after the military junta coup, but efforts are on to keep the junta on India’s side.