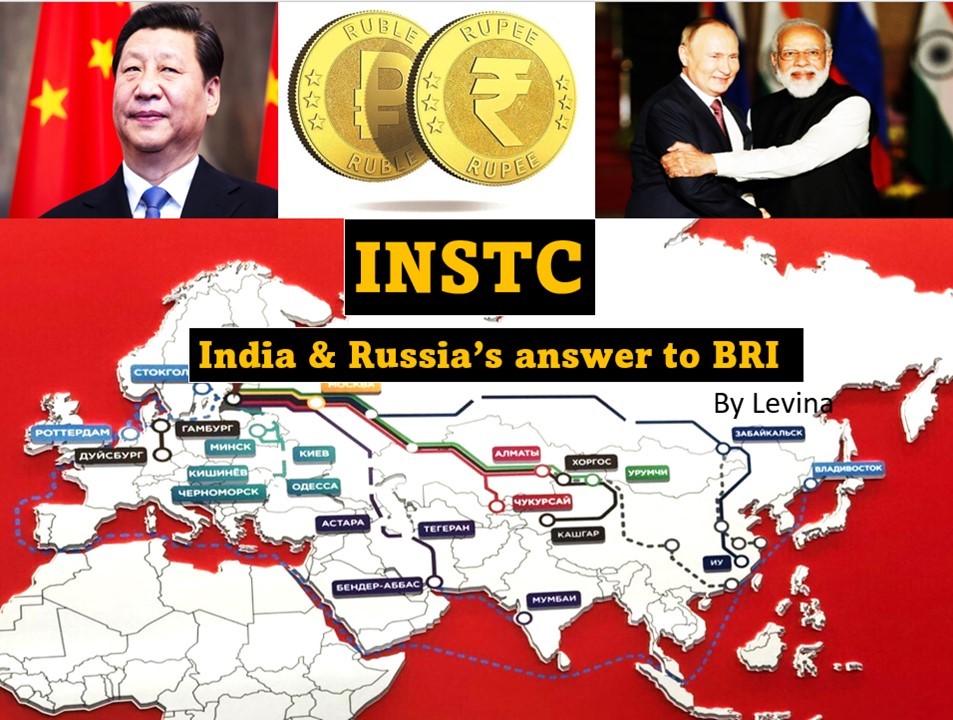 In December 2021, Russian President Putin visited in India among a lot of din, which was followed by a largely unnoticed visit of Chinese State Councilor and Minister of National Defense Wei Fenghe to Kazakhstan, Turkmenistan, Iran, and Oman in April this year. The two visits were connected and had a common theme—economic corridor; just that the Chinese official was on a trip to prevent Indo-Russian INSTC from eating into China’s behemoth project BRI’s share. 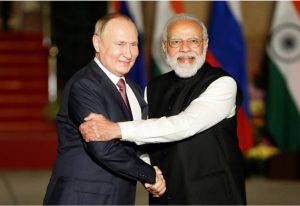 Putin being welcomed in India by Indian PM in Dec 2021 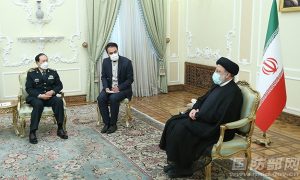 On June 30th, during the 6th Caspian Summit, Russian President Putin in his speech mentioned the ambitious International North-South Transport Corridor (INSTC) that connects India with Russia. This 7,200-kilometre-long transport network will link St Petersburg to ports in Iran and India. A game changer that will change the fortune of many countries that fall in between India and Russia.

Was the Chinese dragon caught napping this time?

The genesis of INSTC took place in 2000, later it was further refined in 2002 by the three founding members, India, Iran and Russia. This 7200 km long multimodal route was designed to be—from Mumbai in India to Bandar Abbas and Bandar-e-Anzali in Iran, then across the Caspian Sea to Astrakhan, Moscow and St. Petersburg in Russia. Since its inception the project saw many ups and downs. Initially it was the sanctions on Iran that whittled INSTC’s growth, but now it is Russia, which has become the world’s most sanctioned country and has been ring fenced, impacting INSTC.

The INSTC includes 13 countries and will transform Euro-Asian freight dynamics. Since 2002, INSTC membership has expanded to include 10 more countries – Azerbaijan, Armenia, Kazakhstan, Kyrgyzstan, Tajikistan, Turkey, Ukraine, Syria, Belarus, and Oman. Bulgaria has been included as an observer state. At one point the Baltic countries including Latvia and Estonia had expressed interest in joining the INSTC, but now the Russia- Ukraine war may have chopped the chances of these two Baltic states of joining it.

The first dry runs to address bottlenecks in this corridor were conducted in 2014 via two routes. The results showed that the transport costs were reduced by “$2,500 per 15 tons of cargo”. 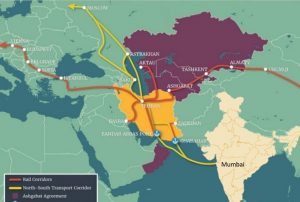 On Jun 14th it was announced that in an effort to operationalize INSTC, Russia would send a consignment. A test cargo which included two 40-foot (12.192 m) containers of wood laminate sheets, weighing 41 tons were sent from St. Petersburg via the Russian Caspian Sea port zone of Solyanka, in Astrakhan. The consignment was shipped south to Iran’s Anzali Caspian seaport, and then transited south via road across Iran to the Iranian Gulf port of Bandar Abbas. And finally, from there the goods were shipped to Mumbai, in India. The entire journey took 24 days which will be further struck down once the trans-Iranian railway is completed next year.

INSTC Vs BRI from Indian perspective

One of the biggest and most discussed advantage of INSTC is reduction in carriage cost between India and Russia by about 30%, also the transit time from 40 days will be reduced to 20 days or less. The tail ends of this corridor, which happens to be Russia and India, have committed to surging the bilateral trade by US$5 billion per annum within next four years. This will bring an economic boom not just to the tail ends, but also the other countries situated along the corridor. Compare this to BRI, which has left myriads of lower- and middle-income countries saddled with “hidden debts” amounting to USD $385 billion.

India has pitched INSTC as a viable and fairer corridor, which doesn’t have surreptitious neo colonialist agenda like that of BRI. The dreaded debt-trap of China is being circumvented by poorer yet resource-rich Central Asian Republics (CARs) by joining INSTC. India has been developing close ties with CARs vis-e-vis trade, energy (uranium), defense and counterterrorism, as well as in technical and cultural spheres through “Connect Central Asia” and other frameworks. 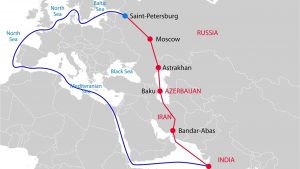 China’s biggest advantage is that BRI is being funded by itself and ergo it can afford to aggressively expand and remain laser focused on the project. Au contraire, INSTC till recently was proceeding in a haphazard manner sans the involvement of any dedicated fundings, and relying mostly on regional development banks, or INSTC member states. Adding to the woes were the bureaucratic and technical issues such as inconsistent transportation laws, insurance coverage, security of cargo transit, and others. This is where the Russian- Ukraine war became a boon. Russia had been pushing the CAR countries to fall in line since sometime and finally everything seems to be working like a well-oiled machine. 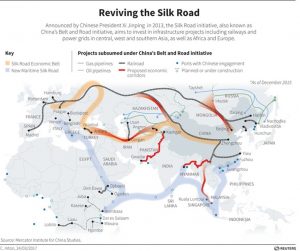 From India’s perspective INSTC comes with an added advantage that it facilitates trade with Russia, Europe as well as CAR, bypassing its bitter neighbour Pakistan.

Both China and Pakistan have always had their prying eyes on India’s trade. While India struggled to invest into Iranian port of Chahbahar, China created a fortress in Pakistani port of Gwadar just 300 Km away.

Experts say that the responsibility of making INSTC viable is shouldered by Chahbahar port and India’s ability to have uninterrupted access to it for its freight-forwarding facilities. But fortunately, Chahbahar port comes with a gamut of advantages for the Iran too as it allows Iran to shore its foundation well in Central Asia where it faces a stiff competition with Turkey and Saudi Arabia. 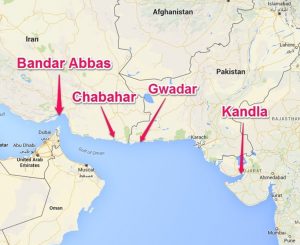 Oman is another ally with whom India will work closely on INSTC. Earlier in Feb 2022, India and Oman’s top official held 10th meeting of the Joint Military Cooperation Committee (JMCC), in which Duqm Port was discussed.

Duqm overlooks the Gulf of Oman, the Indian Ocean, and the Arabian Sea. The port will benefit not just India’s businesses but also assist in transshipment of military equipment or personnel and refueling of naval assets. INSTC, after all cannot merely be an economic corridor but also needs to be fortified militarily. 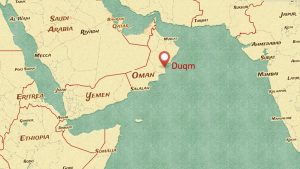 Back in India, Mumbai, India’s economic capital will not be the only city which will be impacted. Places like Nagpur and Bhiwandi from Maharashtra have also been identified as potential logistics hubs.

At this point it must be added that India and Russia are also working at the Chennai Vladivostok corridor, which goes through South East Asia and reaches the South Eastern tip of Russia. But after the Russia-Ukraine war, Russia’s Kuril Islands issue resurfacing with Japan and South Korea’s resistance to cooperate with Russia, has dampened the progress of the corridor. 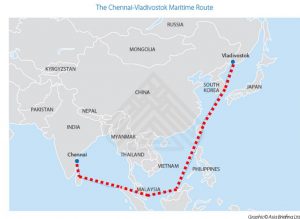 Reports say that the Chinese State Councilor and Minister of National Defense Wei Fenghe’s official trip to Kazakhstan, Turkmenistan, Iran, and Oman in April this year, was to gauge India’s influence vis-e-vis INSTC in these countries.

INSTC versus BRI issue is reminiscent of the famous tortoise and hare’s fable where the slow and steady approach of tortoise won him the race.

INSTC was a corridor in the making since the last two decades but thanks to the Suez Canal blockage and Russia-Ukraine war, the corridor’s work has been expedited, and it will begin benefitting 13 countries stitched together by a 7200 km long corridor, while also serving the purpose of circumventing Chinese influence. India could not have asked for a better deal!

Jul 05, 2022
Although the transit corridor was in news month back for the two containers of laminate plywood and other wooden articles... The same is lot dependant on Iran govt and our relationship with successive Iranian regimes... Especially with Riasi at helm

Jul 05, 2022
A very detailed and well-researched article on a very important topic. It is a matter of time that world would realize the importance of INSTC.

Jul 05, 2022
Chennai Vladivostok corridor not gonna work. Too much of a risk to go through China's backyard. On the othr hand INSTC is a much better trafe corridor in comparison to BRI. BRI does not have any hidden strings. It is purely a business venture. Unlike China, we dont want to catch the member countries in a debt trap. Sooner or later many other countries may join the hands in INSTC.