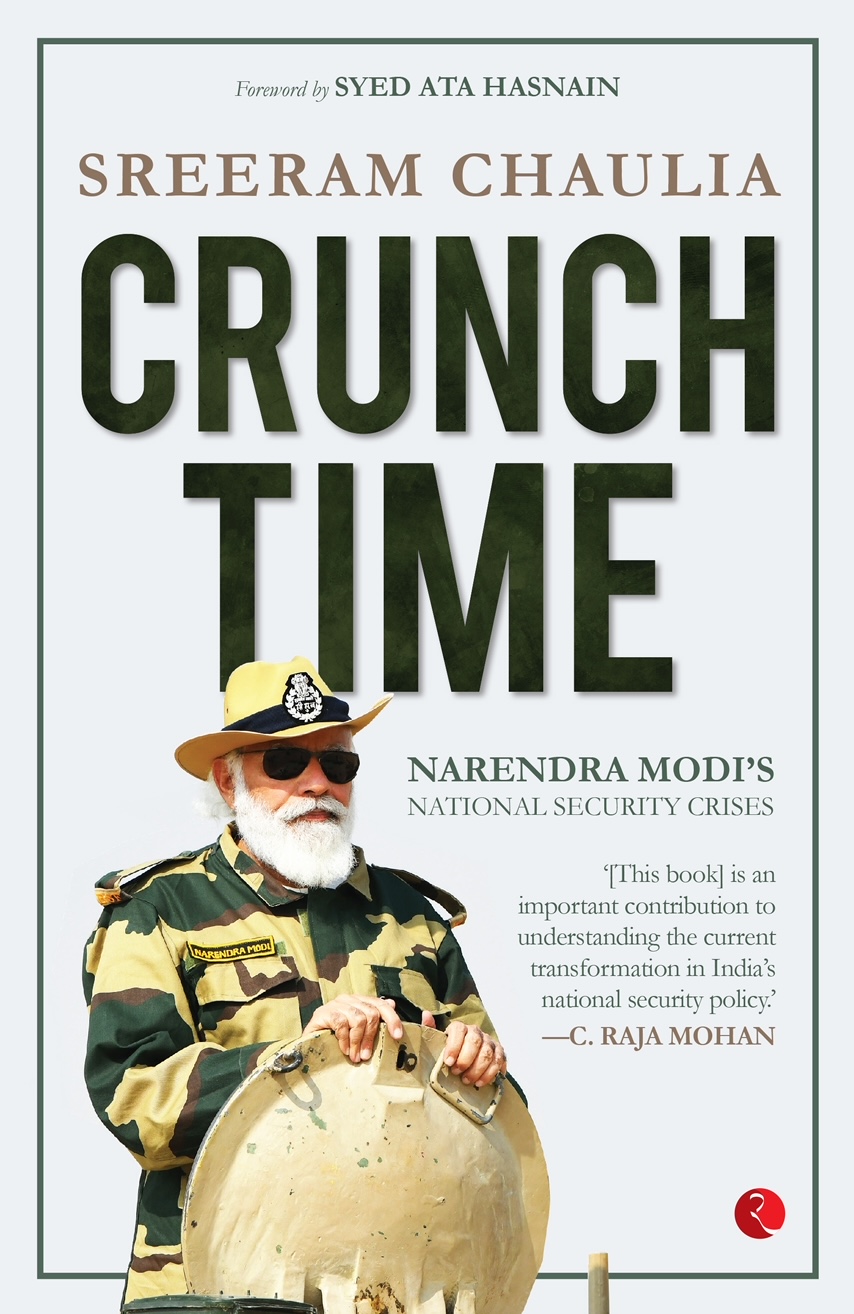 With a catchy title– Crunch Time– and an attention-drawing picture of our Prime Minister in the commander’s cupola of the Arjun Tank! What is this book about? As per the author Sreeram Chaulia, this book offers a comprehensive analysis of how ‘New India’ has conducted itself during episodes of major national security crisis during PM Narendra Modi’s stewardship since 2014. ‘Crunch Time’ refers to a critical period when decisive action is needed. For this, Chaulia has chosen four security related incidents/periods, two each relating to Pakistan and China.

The main theme of this book highlights the change that came about post-2014, when India, under PM Modi asserted its Security First vision and the doctrine of Offensive Defense, not only through its pronouncements but also through follow-up action. This altered the strategic calculus, certainly in the case of Pakistan, and to a limited extent against China. Through his deep knowledge and understanding of the realms of International Relations, National Security and Strategy, Chaulia has made an important contribution to help us understand how this transformation in India’s national security policy has come about.

To understand this transformation, the author has traced the period just prior to 2014, when India earned the tag of a soft state through the bungling and inaction that followed the Mumbai terrorist strike in 2008. This was summed up by Indian American defense expert Ashley Tellis, who rued:

“India has turned out to be a terribly soft state, neither able to prevent many of the terrorists acts that have confronted it over the years nor capable of retaliating effectively against either their terrorist adversaries or their state sponsors in Pakistan.”

As the brutal onslaught of 26\11 was underway, there was shock across India, outrage and frustration at the ongoing catastrophe. Resultantly, the government’s credibility took a huge hit. But the rot had set in earlier, when after the Parliament attack in 2001, the Indian Armed Forces mobilized for Operation Parakaram. Without clear politico-strategic objectives, the Indian Armed Forces remained deployed at the border for a year and missed a golden opportunity to teach Pakistan a lesson and call its nuclear bluff.

The resultant ‘cold start’ doctrine was tailormade to respond to incidents like the Mumbai attacks, but the political leadership hesitated to follow through. It also became clear that the Indian military leadership did not carry the weight to assert at the high table at that time. The absence of a military leader like Sam Manekshaw was acutely felt.

Amongst great expectations, after a landslide victory, Narendra Modi was sworn in as India’s Prime Minister on 26 May 2014. On 4 June 2014, I was granted a call on the PM, where I briefed him about the Andaman and Nicobar Islands. In addition, I took the opportunity to apprise him on major issues involving the armed forces. Prominent were two issues, i.e. the construction of a National War Memorial and appointment of a Chief of Defence Staff (CDS), along with Integrated Theatre Commands. A patient listener, the PM assured me that these two issues were high on his priority agenda. It took five years, but the PM has delivered on both these long pending issues.

“The baseline from which Modi took over the reins of India had been so devoid of strategic culture and confidence in even limited use of military force that his impact can be accurately characterized as hardening a flabby state that has historically been stubbornly resistant to adaptation or modernization to get in sync with global trends. Not since Indira Gandhi has India had a political leader with the charismatic weight and mass electoral mandate as Modi”.

The book analyses in some detail the four crises faced by Narendra Modi in the realm of national security and how he galvanized the Indian response, as per the doctrine of Offensive Defence.

The author has painstakingly collated and analyzed the two crises\responses against Pakistan, i.e. the surgical strikes in September 2016 and the Balakot Air Strikes deep inside Pakistan in February 2019. The first, in my view, was a testing ground for the new doctrine of Offensive Defence which had been adopted by Modi and his National Security Adviser, Ajit Doval. It is not that such cross-border raids/strikes had not been carried out by the Indian Army earlier, but their import lay in the political ownership of the surgical strikes taken by PM Modi. This was strategic signaling at the highest level. Unfortunately, Pakistan failed to realise their significance, as many within India too did not. Modi had changed the goalposts in a well calibrated manner and put the ball in Pakistan’s court.

Pakistan did not heed the message and the terrorist strike at Pulwama in 2019 created a tense environment across the country, with people baying for strong action against the aggressor neighbour. The Indian campaign to diplomatically isolate Pakistan was carefully orchestrated by Modi and his team, which put paid to Pakistan’s effort to divert attention from the jihadist attack in Pulwama, towards resolution of the Kashmir dispute or prevention of war.

India’s response through an airstrike, 80 kilometers deep inside Pakistan, was a well thought out and controlled action, which had the Modi-Doval stamp in conformity with the new doctrine of Offensive Defence. In creating greater room for non-nuclear escalation, New Delhi was careful to label these as ‘non-military pre-emptive actions’. The puzzle is not so much why Modi chose this daring option, but why previous governments did not! India under Modi has clearly established a new normal of ‘Aggressive Retort’, called Pakistan’s nuclear bluff and reclaimed the space for conventional response.

Crisis on the China Front

The India-China stand-off at Dokala in 2017 was a strong wake-up call to Indian strategic planners to change tack vis-à-vis its policy of dealing with China. Chaulia has pieced together the complex multiple causes that led to this stand-off and how the India-China bonhomie turned sour. India’s firm response at the military level was backed by deft diplomacy, including a quiet Russian intervention with China. Looking back at Modi’s decision-making during the Doklam crisis, it is clear that India surprised China by springing to Bhutan’s aid and resolutely standing up for India’s own national security along a third country’s terrain.

The Chinese aggression in Ladakh in 2020 should remove any remaining doubts of Beijing’s duplicity and aggressive intent towards New Delhi. Caught off guard, India did not capitalize on its quid pro quo options until later, when in a bold move, it occupied the Kailash range to surprise the Chinese. The ongoing talks are a work in progress, with the Chinese not showing any intent to pull back from their intrusions in Depsang. The Ladakh conflict needs an in-depth analysis to draw relevant lessons at the politico-strategic and military levels.

Chaulia has done creditable work of collating evidence and presenting a lucid account of the drivers of Modi’s national security policies that have transformed India’s strategic outlook to help make the country more confident and secure. Not many can boast of the depth of understanding in international relations, national security and strategy that Chaulia brings to this book.

If anything is missing in Crunch Time, perhaps some light could have been shed on repeated intelligence failures and how that is being set right. The aspect of ‘crisis management and escalation control’ between three nuclear-armed neighbours also needs urgent attention at the highest level, so that an unintended conflict against a nuclear backdrop is avoided. The inadequate defence budget also continues to remain a matter of strategic concern.

While complimenting Sreeram Chaulia for this scholarly work, the book is strongly recommended for all who have an interest and stake in national security. 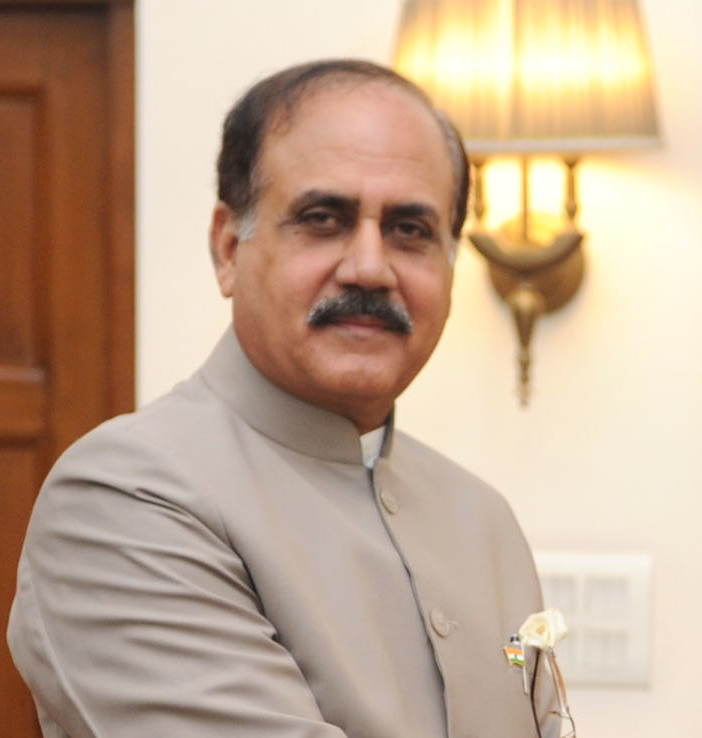 Lieutenant General AK Singh is an erstwhile Army Commander and Lieutenant Governor of Andaman and Nicobar Islands and Puducherry.