Where is the Henderson-Brooks-Bhagat Report? 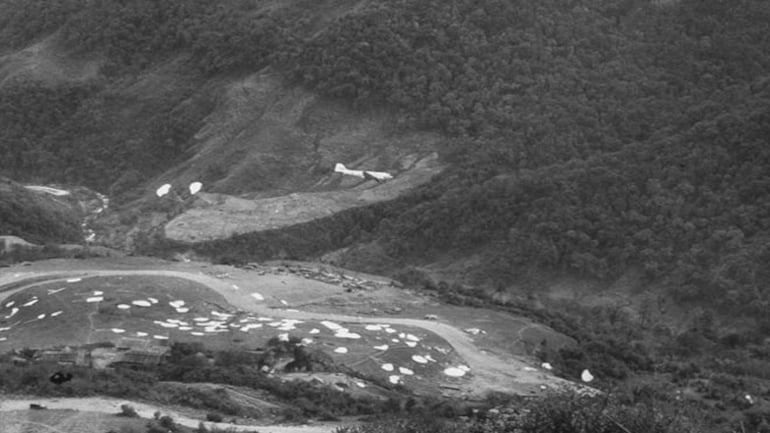 Sixty years ago, traumatic events took place on the Northern borders of India; undoubtedly, the Sino-Indian conflict in October/November 1962 is an episode which marked the Indian psyche.

Though many facets of what happened in October 1962 have already been discussed, many remain to be openly debated.

One is the Henderson-Brooks-Bhagat report written after the so-called ‘debacle’; in fact, it is quite incomprehensible why a non-Congress government at the Centre has not declassified the famous report.

Is it only because the Indian politicians do not care much for history?

Whatever the reasons are, Delhi is still a prisoner of the Chinese narrative, namely that it was a debacle for India, a narrative argued for by Neville Maxwell, the Australian journalist, in his book India’s China War.

A Foreign Authority on 1962

In this context, it is interesting to recall an interesting discussion which took place between Richard Nixon, the US President, Dr. Henry Kissinger, John Holdridge, Winston Lord and the Chinese Premier Zhou Enlai in Beijing on February 23, 1972.

Zhou started mentioning the Panchsheel Agreement between India and China: “Actually the five principles were put forward by us, and Nehru agreed. But later on, he didn’t implement them. In my previous discussions with Dr. Kissinger, I mentioned a book by Neville Maxwell about the Indian war against us, which proves this.”

The US President immediately retorted: “I read the book”.

Nixon explained: “I committed a faux pas — Dr. Kissinger said it was — but I knew what I was doing. When Mrs. Gandhi was in my office before going back, just before the outbreak of the war [1971 Bangladesh Liberation War], I referred to that book and said it was a very interesting account of the beginning of the war between India and China. She didn’t react very favorably when I said that.”

Zhou then burst into laughter: “Yes, but you spoke the truth. It wasn’t a faux pas. Actually, that event [the War] was instigated by Khrushchev.”

Zhou would have said: “In 1962 the Indian Government believed what the Russians told [India] that we [China] would not retaliate against them [India]. Of course, we won’t send our troops outside our borders to fight against other people. We didn’t even try to expel Indian troops from the area south of the McMahon line, which China doesn’t recognize, by force. But if [Indian] troops come up north of the McMahon line …how is it possible for us to refrain from retaliating?”

What is the Henderson-Brooks Report?

One book can help us to understand the background of the Henderson-Brooks-Bhagat Report. Between 1962 and 1965, RD Pradhan was the Private Secretary of YB Chavan who had taken over from the disgraced Krishna Menon as Defence Minister after the debacle of October 1962.

Pradhan’s memoirs, give insights into Chavan’s reasoning when he ordered the inquiry: “For Chavan the main challenge in the first years was to establish relationship of trust between himself and the Prime Minister. He succeeded in doing so by his deft-handling of the Henderson-Brooks’ Report of Inquiry into the NEFA [North East Frontier Agency, presently Arunachal Pradesh] reverses.”  Pradhan continues: “[Chavan] learnt some ‘lessons’ that helped him in the conduct of the 1965 Indo-Pak War.”

During one of the debates [in Parliament], Nehru had assured the Parliament that an inquiry would be held into the debacle. After much deliberation, Chavan proposed an inquiry by a committee of two serving Army officers rather than a judicial probe or a public enquiry as expected by the Parliament. Further instead of the Defense Minister appointing a committee, he asked the Chief of the Army Staff (COAS) to set-up the same.

Accordingly, a two-man committee with Lt Gen Henderson-Brooks and Brigadier [later Lt Gen] PS Bhagat was formed. Both officers had impeccable record of service. Henderson-Brooks, an Anglo-Indian, had opted to serve the Indian Army after partition and Prem Bhagat was the first Indian officer to be conferred the Victoria Cross during World War II for bravery on the battlefield. Their report was presented by the COAS to Chavan on July 2, 1963. The report contained a great deal of information of an operational nature, formations and deployment of the Indian Army.”

But Pradhan explains further: “In 1965, it was considered too sensitive to be made public and although outdated today [in the 1970s], the report unfortunately remains secret.”

Pradhan asserts that he was the only person who had fully examined the report.

The ‘Inquiry Report’ [the Henderson-Brooks-Bhagat Report] was submitted to the COAS on May 12, 1963 and it was finally handed over to the Defence Minister on July 2, 1963.

At that time, Chavan stated in Parliament that the “the contents were not disclosed for considerations of security” and because they were likely to “affect the morale of those entrusted with safeguarding the security of our borders”.

On September 2, 1963, the Defence Minister spoke again and disclosed that the Inquiry Committee had not confined its investigations to the operations in NEFA alone but examined the “development and events prior to hostilities as also the plans, posture and the strength of the Army at the outbreak of hostility”. Further, a detailed review of the actual operations both in Ladakh and NEFA had been carried out “with reference to terrain, strategy, tactics and deployment of our troops”.

It is clear that the decision of Lt Gen Henderson-Brooks and Brig Bhagat to go into “development and events prior to hostilities as also the plans” embarrassed the Government.

Is it this which continues to embarrass the Government.

Summary of the Recommendations of the Report

In the Parliament, Chavan gave a summary of the main recommendations of the Report:

It was found that “our basic training was sound, and soldiers adapted themselves to the mountains adequately”. But troops had not been prepared for a war with China and hence they had “not requisite knowledge of the Chinese tactics and ways of war, their weapons, equipment and capabilities”.

There was “an overall shortage of equipment both for training and during operations”, though “the difficulty in many cases was that while the equipment could be reached to the last point in the plains or even beyond it, it was another matter to reach it in time, mostly by air or by animal or human transport, to the forward formations who took the brunt of fighting”.

‘Basically’ nothing was wrong with the system and chain of Command provided it was exercised in the accepted manner at various levels. It was revealed that “during the operations difficulties arose only when there was departure from accepted chain of Command”. Such departures occurred mainly owing to “haste and lack of adequate prior planning”.

It was encouraging to find that our troops, (both officers and men) stood the rigours of the climate, although most of them were rushed at short notice from plains. But it was stated “they were not acclimatized to fight at the heights at which some of them were asked to make a stand”.

(5) Capacity of our Commanders

By and large, it was found that the “general standard amongst the junior officers was fair… At Brigade level, but for the odd exception, commanders were able to adequately exercise their command. It was at higher levels that shortcomings became more apparent. It was also revealed that some of the higher commanders did not depend enough on the initiative of the lower commanders…”

The Inquiry also spent time on the question of military intelligence and procedures and higher direction of operations.

An extract of the Report available on the Internet, perhaps explains the reluctance of the government to release the report; it relates to the fact that the local commanders had no maps of the area; further, “Dhola Post was established north of the McMahon Line as shown on maps prior to October/November 1962 edition. It is believed the old edition was given to the Chinese by our External Affairs Ministry to indicate the McMahon Line. It is also learnt that we tried to clarify the error on our map, but the Chinese did not accept our contention. The General Staff [Lt Gen BM Kaul?] must have been well aware of this; and it was their duty to have warned lower formations regarding the dispute. This was not done, and the seriousness of the establishment of the Dhola Post was not fully known to lower formations.”

The explanation is simple, as the main principle to delineate borders in a given area is the watershed, Delhi had decided to realign the boundary with the next ridge (Taghla); unfortunately, the troops on the ground were not informed that there were some objections from China.

Sixty years after the event, the time has come to reveal the details of what went wrong, as one often learns more from defeats than successes.