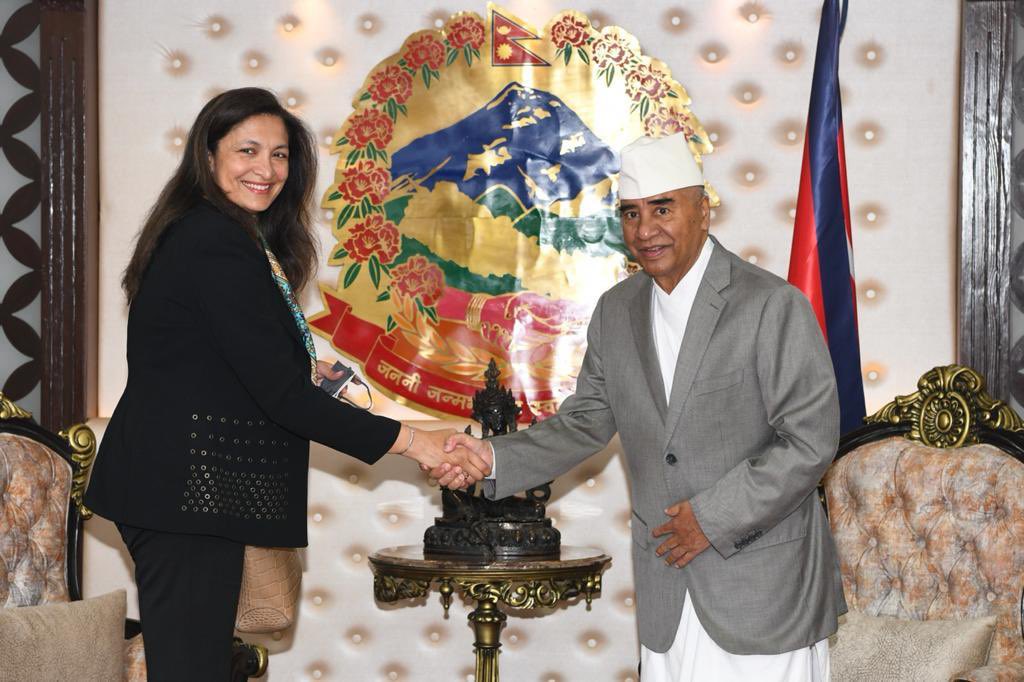 Kathmandu, May 22 (PTI) US Special Coordinator for Tibetan Issues Uzra Zeya called on Nepal Prime Minister Sher Bahadur Deuba on Sunday and the duo discussed a range of issues of mutual interest, including ways to boost bilateral ties.

During the meeting, discussions were held on Nepal-US bilateral relations and various topics of mutual interest, according to Nepal’s Ministry of Foreign  Affairs. Zeya, who is leading a US delegation, arrived here on Friday in connection with a three-day visit to Nepal, the ministry said. After arriving in Nepal, Zeya announced America’s USD 659 million assistance to Nepal. “Happy to celebrate with @USAmbNepal & @USEmbassyNepal the new @USAID-Nepal assistance agreement which will provide $659M to support our shared vision for a democratic and prosperous future,” she said in a tweet.

On Friday, she met the International Women of Courage awardees Bhumika Shrestha and Muskan Khatun. Zeya expressed her happiness over the meeting with the two women who have been felicitated for their work in the LGBTQI+ rights movement and against acid attacks, respectively. She also visited the Boudha Stupa and praised Nepal’s rich religious, architectural, and cultural history.

Zeya visited India before arriving in Nepal. During her visit to India from May 17-20, she met senior government officials, including Foreign Secretary Vinay Kwatra, and the discussions focussed on global and regional issues of mutual interest, the Ministry of External Affairs said on Thursday. Zeya also visited Dharamshala where she met the Dalai Lama on Thursday and discussed the rich traditions of freedom and democracy in the United States and India.

The Tibetan government-in-exile, in a press statement on Thursday, said Zeya expressed US President Joe Biden and the American people’s greetings to the Dalai Lama. She visited the Central Tibetan Administration on Wednesday and held discussions with its leadership. Zeya also visited the Tibetan Parliament-in-Exile, the Tibetan Institute of Performing Arts, and the Tibet Museum, and also met with members of the Tibetan civil society, according to the statement.

China sharply criticised Zeya’s meeting with the Dalai Lama and her visit to Dharamshala, saying it violated Washington’s commitment that Tibet is part of China and it does not support Tibetan separatists. “Tibet is part of China and Tibetan religious affairs are China’s internal affairs,” China’s Foreign Ministry spokesman Zhao Lijian told a media briefing on Thursday when asked about the Indian-origin senior US diplomat’s meeting with the 86-year-old top Tibetan Buddhist leader.

The US’ appointment of a Special Coordinator for Tibetan Issues is an interference in China’s internal affairs, he said, adding China firmly objects to it and has never recognised it. Asked whether China had raised with India its criticism of Zeya’s meeting with the Dalai Lama, Ministry of External Affairs Spokesperson Arindam Bagchi said on Thursday, “I am also not aware if there is anything said by the Chinese on this to us.” Responding to a question on Zeya’s visit and if she had raised human rights issues in her meetings here, Bagchi said she met senior officials in the government, including Foreign Secretary Kwatra and Secretary (West) Sanjay Verma.

“She also met the Chief Election Commissioner among others. Discussions focussed on global and regional issues of mutual interest. Both sides also discussed follow up to the prime minister’s participation in the Summit for Democracy in December 2021 that was hosted by President (Joe) Biden,” he said. “I am not aware of the details of the conversation as to what specific issues were raised. I would not be able to comment on that. But as regards to her other activities and agenda, I would refer you to the US embassy,” Bagchi said at a media briefing in New Delhi.

The Dalai Lama has been living in India ever since he fled Tibet in 1959 following a Chinese invasion of Tibet. The Tibetan government-in-exile operates from Dharamsala. Over 1,60,000 Tibetans live in India.