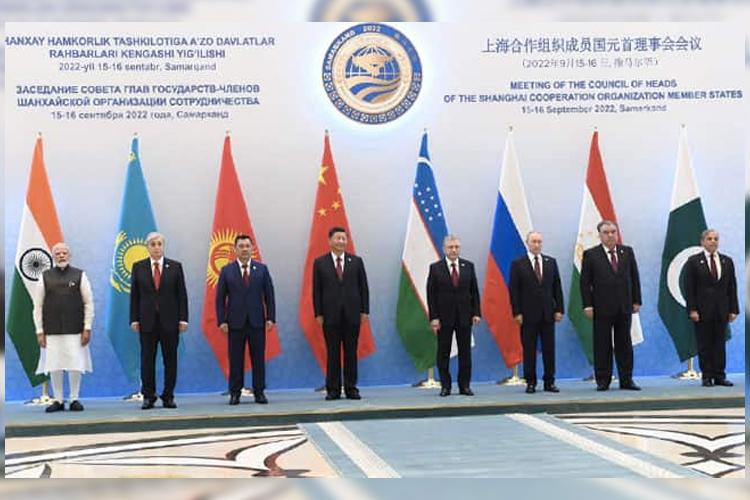 Indian participation at the 22nd Summit of the Shanghai Cooperation Organization drew attention. It was a clear manifestation of India’s strategic autonomy as the SCO is widely regarded as a group of autocratic regimes with only India as the democratic freshener. India views the SCO despite the Chinese dominance, as an area of necessary engagement as its near neighbourhood cannot be ignored.

SCO was set up in June 2001 and India became a full member in 2017. The Council of the SCO Heads of State is the highest decision-making body of the organization and meets for an annual summit that is hosted by a member state of the SCO.  The last two summits in 2020 and 2021 were virtual. In Samarkand, Uzbekistan held a full physical format summit.

In a restricted session the eight Member States participated, and the extended session brought in Members along with the Observers and the invited countries. The SCO’s eight Member States (China, India, Kazakhstan, Kyrgyzstan, Russia, Pakistan, Tajikistan and Uzbekistan), four Observer States interested in acceding to full membership (Afghanistan, Belarus, Iran, and Mongolia) and six “Dialogue Partners” (Armenia, Azerbaijan, Cambodia, Nepal, Sri Lanka and Turkey) were represented. The summit agreed to bring in Iran as a member next year, Belarus is possibly next, whose membership will take a little longer. The UAE, Maldives, Bahrain, Kuwait and Myanmar are the new dialogue partners of the SCO. Myanmar now provides a further link to ASEAN and BIMSTEC.

India’s main contribution towards the discussions at the SCO were focusing on development in the region and thus contributing to global development. Modi emphasised the centrality of the aspirations of the Central Asian republics within the SCO just as ASEAN centrality is the core of the Indo-Pacific construct. Modi also called for closer cooperation to fight terrorism in the region.

Emphasising regional connectivity, Modi said that this was essential for closer economic and trade engagement. This is significant for India and Central Asia, particularly as Iran is to be admitted as a member at the next summit to be held in India in 2023.

The Chabahar port in Iran is an important project which India and Iran are developing for regional connectivity along with the North-South Transport Corridor. In better times, this connectivity also passed through Afghanistan where India contributed roads and railways for providing linkages.

Given the current global cleavages and that China and Russia dominate the SCO, Modi played his diplomatic cards deftly. He kept away from security related issues other than terrorism. Instead, he focused on economic recovery through enhanced trade, commerce, humanitarian and development partnerships linked to increased connectivity.

Among the several documents signed at this summit, the Samarkand Declaration, is a consensus among all members. Significantly, India recused itself from the paragraph dealing with the BRI which was endorsed by the other members. India always disagreed with this and therefore, that paragraph does not have India’s concurrence.

Another important statement on this occasion was on climate change which had a large Indian initiative. The SCO decided to create a Special Working Group on start-ups and innovation. India would chair this SWG permanently. This manifests India’s willingness to share its start-ups entrepreneurship and ambience with other SCO countries as part of a post- pandemic recovery programme. India hopes the infusion of the start-up culture within the SCO framework will help the central Asians on setting up their own innovation systems.

Another Indian initiative which was accepted was the establishment of an expert working group on traditional medicine where Central Asia has several starting points which can be developed.

Against terrorism, which is one of India’s main agenda within the SCO, India works closely, even though with China and Pakistan there are differences on the ground, bilaterally and in the UN. India’s diplomatic efforts at the SCO led to all member countries, clearly recognising the threat of terrorism in the region. SCO will work towards developing a unified list of terrorists, separatists and extremist organisations whose activities are prohibited within the SCO member states. This should help in dealing with Pakistani and China directly on this important issue where terrorists are sometimes sheltered by their vetoes

It was a good occasion for Modi to meet other leaders. There was no bilateral with China or Pakistan showing that while India is ready to meet them in plurilateral meetings, bilateral engagements require these two countries to show better and mutual respect to India.

Modi had important bilateral meetings with leaders of Uzbekistan, Russia, Iran and Turkey. With Turkey there has been a difficult relationship.  India showed depth in diplomacy in creating bridges wherever they can be created. In the conversation between Modi and Putin, the well reported significance of Modi’s advice that this is not an era of war is well noted. India’s autonomous polices allow it such leeway for constructive dialogue.

The conversation with Iran reconnected especially on the issue of the Chabahar port. The Modi-Erdogan meeting was quite unexpected. It focused on expanding trade, which is now almost $10 billion with Turkey.

The entire effort of Indian diplomacy through the SCO while at the same time, being a member of the Quad, associating with the G7 and partnering other countries in diverse ways shows that India is treating the SCO much like it does its relationship with East Asia Summit (EAS). However, unlike the EAS, which is more balanced, the SCO is dominated by Russia and China.

Thus, at the SCO Summit, the effort was to find ways and means to make the organisation effective and useful to its member states and their people. The implosion of Afghanistan, the tentative nature of governance in Pakistan and domestic compulsions in China, as well as the Ukraine crisis generated uncertainty in Russia, all mean that a churning in the region is possible. India does not want a disturbed Central Asia and wants Afghanistan to settle down. Therefore, the effort was on to create bridges of harmony by focusing on development, connectivity, trade, and investment.

India’s willingness to offer its own strengths to contribute to this is an effective show of autonomy exercised by India. Chinese domination is recognised but not acquiesced in, as India steps up and offers what it can to the members of the SCO.

Oct 01, 2022
India has devoted considerable attention to relationships with African nations (including the opposition for apartheid). We have done this since the 1970s. It would be good to learn on this blog whether that is paying any dividend. Of course the moves made by India to build connections with central Asia are wonderful. At present, much of their infrastructure is developed by foreign countries (such as South Korea), and not sure whether any Indian contractors are awarded contracts for their infrastructure development. There are Seoul - Ulan Bator flights daily; is there even one from New Delhi direct to any central Asian republic? Much work needs to be done.