The most sophisticated of surgical instruments remain ineffective when used by those unsuited to handling them. Whether it be in Afghanistan, Iraq, Libya or Syria, US forces have failed to subdue largely irregular forces substantially inferior to them in equipment and often in number. This is partly the consequence of the primary Battlefield Objective of the US armed forces being self-preservation, and partly because of the adoption of tactics unsuited to the neutralisation on the field of such an enemy.

Afghanistan is neither Germany nor the US, the UK or France, and yet it is these countries that have expended considerable effort in training and guiding the Afghan National Army (ANA) in order to make that force commit to battle in the manner that their trainers do. A manner that has led to the revival of the very irregulars that President George W Bush swore to eliminate in 2003. A war is not won by declaring the present foe to be a future friend, for such a transformation comes about only after the comprehensive defeat of that foe in battle, something that has eluded the well-equipped and amply-manned military of NATO in the many wars that they have fought during the 21st century.

In contrast, India (despite having a far lower level of resources to expend on its troops) has succeeded in recovering the initiative against irregular forces armed, funded and trained by GHQ Rawalpindi with assistance from the PLA. Which is why the withdrawal of US troops in Afghanistan by President Biden in less than five months is less a setback than an opportunity, but only provided the ANA is given

(a) the weapons, intelligence and logistics help needed and

(b) the correct training to take on the Taliban and other elements that are circling around preparatory to converting President Ashraf Ghani into the next Najibullah.

The Afghans do not need Indian troops to take on and defeat the Afghans in the Taliban and their Pakistani minders. They do require some of the expertise of the Indian soldier in the world’s biggest democracy’s battle against extremists nurtured in the crucible of the global terror machine, the Pakistan army, and this needs to be in place by September 11, 2021, the date that Biden has set for completion of the withdrawal of US troops from a country that has been ravaged as much by the errors made by NATO as by extremism.

There is little benefit in a resource unless it be used in the proper manner. India is a coal superpower, yet spends considerable amounts of foreign exchange every year importing the feed stock. Even items as crucial to the very survival of the people as the ingredients that go into the manufacture of pharmaceuticals have been outsourced to China at the cost of facilities in India. Similar is the situation with rare earths and a host of other essential items. Much of the intellectual property that has gone into the design and manufacture of telecom equipment comes from Indian minds, and yet almost all such equipment is sourced from abroad, principally the PRC. Hundreds of tons of sand
containing rare earths have been exported each year to the PRC from India, helping to make that country almost the monopoly producer of an item that Canada, Australia and India could make with ease, had it not been commercially a smidgen cheaper to manufacture the same in China. Now that President Xi Jinping is threatening to block rare earth and other exports to countries that refuse to ratify the extravagant claims on land and water made by Beijing, the folly of being dependent on the PRC for so many items that could have been manufactured locally or within the democracies is becoming evident. The more Wahabbi a country, the closer its links to China, which finds in such extremism a factor that can divert the attention of the US, the EU and other countries from itself. In such a context, the shift in emphasis by the Biden administration from Wahabbi Extremism to Authoritarian Expansionism as the principal foe of US interests is justified. The first can be overcome, especially if it were to lose the often not even clandestine support of the other.

This does not mean that extremism should be ignored. It is in the interests of the PRC if the pot of extremist violence is kept on the boil, hence the battle against such a menace is part of the struggle against Authoritarian Expansionism. Because of the 1948 folly of not taking back control of the entirety of the princely state of Jammu & Kashmir, neither Indian nor pro-India forces have a usable land border with eastern Afghanistan.

However, because of assistance provided in crossing by GHQ Rawalpindi, anti-Indian groups have such a border. To assume that such a facility will not get used by the GHQ Rawalpindi-PLA alliance to cause trouble for India would be to join those who since the 1920s have acted on the assumption that making concessions to hostile elements would change their behaviour towards India.

It is in the common interest of India and the US that the elected government in Kabul recover territory lost to the Taliban,hence the need for the former to provide training and the latter equipment to the Afghan National Army. Ensuring that the supply of both is plentiful would boost the morale of the Afghan people and stiffen their resistance to the retrogression represented by the Taliban in all their avatars.

Britain and later the USSR needed materiel from the US in order to retrieve the air and land situation from disaster during the 1939-45 war caused by Adolf Hitler. Now that US forces are leaving, ensuring that morale and confidence remain high within both the Afghan military as well as the general population is crucial in rolling back the Taliban tide. This can come only should President Biden commit to the supply of weapons and other materiel to the Afghan forces battling the Taliban. That militia has declared victory over the US. It must be shown across the world that such a claim is the opposite of fact, else the global fightback of the moderate majority of Muslims against Wahabbism will be severely impacted.

Rather than remain aloof, India needs to put in motion a program designed to provide training for the ANA, with countries in Europe and East Asia that are allied to the US meeting the costs of such training. Equipment from the US, training by India and financial assistance from the EU and Japan in particular are essential for the achievement of stability in Afghanistan. Such a package needs be put together, and Indian diplomacy must play the keystone role in such an effort.

The Sino-Pak alliance is standing by to occupy the space left vacant by the US troop withdrawal.That space needs to be filled by the trio mentioned earlier, and which includes the US in the capacity of a provider of logistical and information support to the ANA, which must not be allowed to go the way forces under President Najibullah did in 1992 when they disintegrated in the face of the forces opposing them. It will cost much less time and effort to prevent a repeat of the tragedy of Afghanistan in yet another form by the provision of assistance to the government in Kabul than it would once the furies of the past return as conquerors of a people who no longer want them.

Afghanistan may be regarded as a distant place by sections of the international community, much the same way as Czechoslovakia was in 1938 when Chamberlain and Daladier gave much of it away to Hitler, who very soon grabbed the rest. Both Pakistan as well as its all-weather ally China would benefit from Afghanistan sliding into the hands of the Taliban.

This time around, the civil war will be a lot less unequal than was the previous fightback against the groups that coalesced into the Taliban during the 1990s. The people of Afghanistan remember the period of Taliban rule and barring a few who are longing for a return to the customs of the past, the population of Afghanistan looks towards a future that embraces the modern and the moderate. This is especially true of women, who have long been denied anywhere close to an equal opportunity to develop their skills and secure the lifestyle of their choice, except when they migrate to faraway shores, an opportunity available only to a few. The country must not be abandoned to its fate, although the nature of the involvement needs to change.

The decision by President Biden to withdraw troops within a brief period of time needs to be followed by coordinated action by the democracies to nurture that legacies of freedom and justice in a country that had been stripped of it. The US, the EU, Japan and India must work together and yet separately in Afghanistan, if that country is to be prevented from re-entering a period when it was the nursery of terror that was so virulent that it menaced the most powerful country in the world. And will do so again, unless there is a plan for the day after withdrawal in a way that was absent during the days after the rout of Saddam Hussein and his army in Iraq in 2003. That history must not be repeated by the White House, but for success and not disaster to follow this particular Biden move, India, the EU and Japan must step forward to assist the government in Kabul to overcome the forces seeking to yet again convert Afghanistan into a source of extremist
terror. 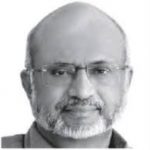