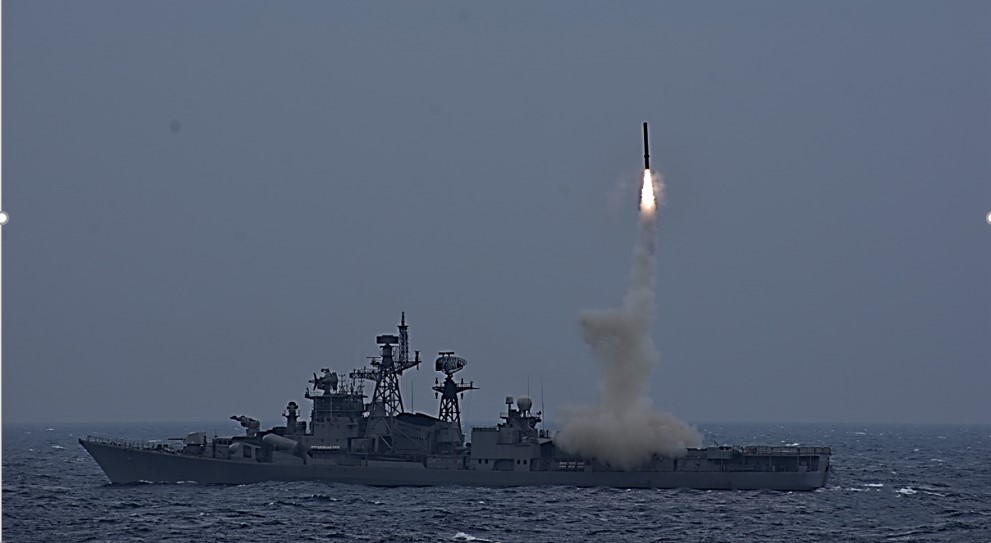 Maritime operations feature one of the most sophisticated and asymmetric fighting environments, given their multi-dimensional threat scenarios and vastness of the area of operations, both surface and sub surface.  Moreover, the military technology and tactics in sea-battles are advancing at a higher pace to that of other domains, its transformation enabled by maritime adaptations and innovations, most notably the highly accurate and information-intensified long-range smart sea weapons. The significant advancements (such as weapon’s supersonic or hypersonic speed, warhead lethality, and thousands of kilometres range) in missile technology has been shifting the balance of power back to fleets of medium and large-sized surface combatants.

Generally, maritime warfare combines multiple formats; anti-submarine, anti-surface, land-attack and air-defence. Each of the domain is supported by certain class of missiles to thwart linked maritime threats. In the middle of last century, a handful of global navies had started fielding a wide range of platforms entailing guided missile vessels, submarines, and multirole warplanes, packed with powerful anti-ship, anti-air and land-attack missiles that were meaningful to implement a tactical and strategic sea-denial doctrine of a navy. And, today in the 21st century, these highly advanced missile systems are deemed as the key force multipliers of a blue water naval force.

Indian Navy, world’s 6th largest and the key actor in the Indian Ocean Region (IOR), also comes among that handful of maritime forces that holds a credible diversified stock of sea-centric smart weapons. In the wake of increasing challenges from the expansion of Chinese PLA-Navy around Indian waters, Indian Navy is exploring options to equip its warplanes, warships and submarines with next-generation extended-range anti-ship and land attack missiles. Back in the 1990s, the Indian Navy lacked enough offensive capabilities as well as power projection enabled by credible missile force. But, in the last three decades, it considerably upgraded its missile arsenal in terms of  quality, stock as well as strike-range. In collaboration with Defence Research Development Organisation (DRDO) and Indian defence industries, it achieved substantial growth in the induction of medium as well as long-range strategic and conventional strike weapons. Major surface vessels of Indian Navy have received a massive upgrade in firepower as  they have been loaded with increased numbers of  missile cells carrying advanced anti-ship and land-attack cruise missiles, anti-submarine missiles and torpedoes,  air defence and ballistic missiles. Since 1990, the number of weapon cells have significantly increased from 70 to over nearly 700 cells housing several types of versatile new-generation strike munitions.  In addition to this, the advancement in the strike-range and quality is also a key factor which improved drastically from a sub tactical 16 km to strategic reach of over 3500 km now. 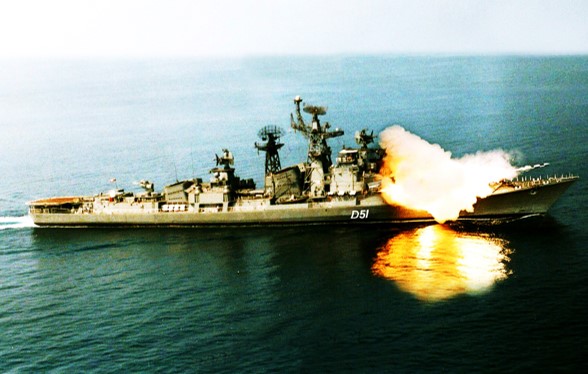 In the anti-air warfare (AAW) space, Barak-8 surface-to-air missile (SAM), a joint development of Indian DRDO and Israel’s IAI, is the key SAM system active on all major modern surface vessels of Indian Navy. The Indo-Israeli Barak-8 (LRSAM in India) features a significantly superior 360° defence shield against all types of aerial threats including fighters, cruise missiles, helicopters, UAVs and ballistic weapons. Powered by Indian-made state-of-the-art dual-pulse motor and Israeli-made cutting edge active seeker as well as command systems (Elta’s MF-STAR), LRSAM is capable of hitting highly manoeuvrable airborne targets with a very high supersonic tempo at ranges up to 70-km. Moreover, DRDO and Israel’s IAI have already expanded the range of the missile up to 100-km, the new extended range LRSAM will be equipped on sixteen major warships which are still under construction and would be inducted into Indian Navy’s fleet in the next few years. In addition, the navy also holds stocks of LRSAM’s predecessor, the Barak-1. The missile acted as a point defence system to take on air threats at close ranges.

Spearheading a move to enhance indigenous content in navy’s missile armoury, DRDO has started a project to develop a vertical-launched short-range surface-to-air missile (VL-SRSAM) that will enable 24×7 360° defence shield for modest-sized Indian naval ships including future NGMVs, Corvettes and light Frigates. The new air-defence system being developed from India’s first air-to-air missile Astra BVRAAM, would feature similar airframe and technology with additional advanced thrust control. The first test-flight of VL-SRSAM has already been taken place in February this year. Once cleared in trials, the missile will supplement in-service Barak-1 and upcoming imported SRSAM that will be procured soon as emergency purchase for Kamorta-Class vessels.

Apart from conventional weapons, navy has made substantial progress in the area of strategic reach. A small number of Indian Navy’s surface combatants were fitted with 350-km Dhanush ballistic missile, the ship-borne version of tactical weapon possessing very high accuracy, and hence, can be used as anti-ship ballistic missile (ASBM) during a naval clash. India has demonstrated its capability to launch long range ballistic missiles both from surface vessels as well as underwater. SLBM would be the third and most vital leg of India’s nuclear triad. Indian Navy’s nuclear submarine INS Arihant is undergoing sea trials and DRDO’s missile program is a success story which will enable the missile launch capabilities of Navy’s ships and submarines to a great extent.

Since 1990, the anti-ship and land-attack missile stocks of Indian Navy have performed the most impressive growth. A wide range of anti-ship missiles (AshM) including French, English, Russian and indigenous systems have been inducted by the Navy into its inventory. The anti-ship missiles are a revolutionary addition in maritime warfare to craft a robust sea-denial strategy, today countries like the US, China and Russia have invested heavily in this segment, and hence, enjoy a powerful sea-denial force in their respective waters.

Similarly, the Indian Navy, also, has been working actively to expand its AShM stocks to form a substantial sea-denial network around Indian waters. Slowly and steadily, it has achieved substantial breakthroughs in this direction. It is the amongst world’s first naval forces to deploy a high-supersonic (~Mach 3) anti-ship missile, which is the most critical improvement in the Navy’s missile warfare capabilities. The 290-km high-supersonic Indo-Russian cruise missile BrahMos is even capable of taking out a moving light aircraft carrier sized targets with pin-point accuracy. In addition, an extended-range variant of the missile with nearly 400 km range has also been tested by BrahMos Aerospace which will  boost strike capability of Indian armed forces in future. This new variant would most likely be fitted on India’s new-generation surface combatants including the new aircraft carrier. An air-launched iteration christened BrahMos-A has also been cleared on IAF’s Su-30MKI heavyweight fighter aircraft. The BrahMos-equipped Su 30 is a massive boost to Indian Navy’s sea-denial capabilities as this ‘Sukhoi-BrahMos’ unique combo is greatly capable of destroying any sea targets even in high seas. BrahMos Aerospace has also launched a program to develop a baby BrahMos missile christened BrahMos-NG with significantly reduced weight and dimensions. The 1.5-ton weapon will feature similar range and 20-25℅ better speed (~3.5 Mach) than current BrahMos system. Once ready, it would be equipped on the Navy’s Mig-29K fighter fleet and smaller class surface vessels to enhance their combat potential. Moreover, a torpedo tube launched variant is also in pipeline for seaborne forces. 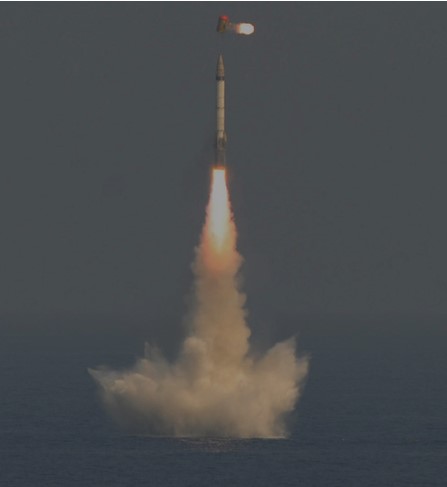 In order to reinforce dominance in IOR, Indian Navy has expressed its intentions to have a multi-mission (anti-ship and land-attack) very long-range naval strike cruise missile capable of being launched from warships, submarines and maritime aircraft. Consequently, Aeronautical Development Establishment (ADE) of DRDO has been developing a low-cost turbofan-powered subsonic cruise missile designated as Nirbhay. The six-metre long, indigenous missile armed with 300-kg warhead, rival to Chinese CJ-10 and the US Tomahawk, has already completed the developmental tests, however, a few more trials would be undertaken to validate new indigenous small turbofan engine (STFE), Manik, and seeker on Nirbhay. Presently, the 1000-km range missile is powered by a Russian-made short turbofan that will be supplanted by GTRE’s Manik in next few months. While the anti-ship iteration of Nirbhay has been progressing well under a new designation named indigenous technology cruise missile (ITCM), the Navy also has projected a need for 1000-km+ land-attack long-range cruise missile (LALRCM).

In a move to fulfil new naval requirements, ADE has begun research and development work on Nirbhay’s next version, LRLACM, for Indian Navy. Once ready, the LRLACM will be the first Nirbhay variant that will be inducted on Indian Navy’s frontline warships along with BrahMos. With one-third weight and approximately thrice the range, this new missile will be highly cost-effective (nearly $1-1.5 million) compared to BrahMos that costs $3 million apiece. It is likely to be designed as an autonomous weapon with sea skimming and loitering capabilities. A slightly smaller and lighter air-launched variant of ITCM is also in the lab work for IAF and the Navy. Hence, a formidable duo of BrahMos and Nirbhay ITCM will offer Indian Navy an unmatched power against its rivals at sea.

While the family of indigenous missiles are being actively inducted and installed on various platforms, most of the ships and submarines carry Russian, Israeli, US and French missile systems which include Russian Klub, Boeing’s Harpoon and MBDA’s Exocet. The Navy has also embarked on its quest for medium-range AShM to replace its decades-old ‘Sea-Eagle’ missile acquired from Britain; the missile is currently operational on Il-38SD and Sea King helicopters. However, in a major move to provide Indian Navy with an indigenous helicopter-launched strike weapon, DRDO is now working on 55-km range ‘NASM-SR’ (naval anti-ship missile short-range) for Navy’s Sea Kings and upcoming MH-60R Seahawks (most likely). The 375-kg NASM-SR will be loaded with a number of impressive features— high resolution IIR terminal and INS-GPS mid-course guidance, 1.2 kN solid rocket motor and Jet vanes control (JVC)— will supplement the limited stock of Kongsberg’s naval strike missile (NSM) that will enter the Navy service this year with MH-60R Sea Hawks.

With Quad gaining prominence and the centre of gravity of geopolitics shifting to Indo Pacific, thanks to Chinese belligerence, Indian Navy will have a very important role to play in realising the objectives of Quad and expectations of the Southeast Asian countries including Japan.  USA and EU see India as the balancing force in Indo Pacific to counter China which will depend a lot on India’s maritime capabilities.

Atul Kumar is a defence analyst with Chanakya Forum and keenly follows the developments in weapon systems and technologies. He writes about latest weapon platforms and modernisation  of Armed Forces.