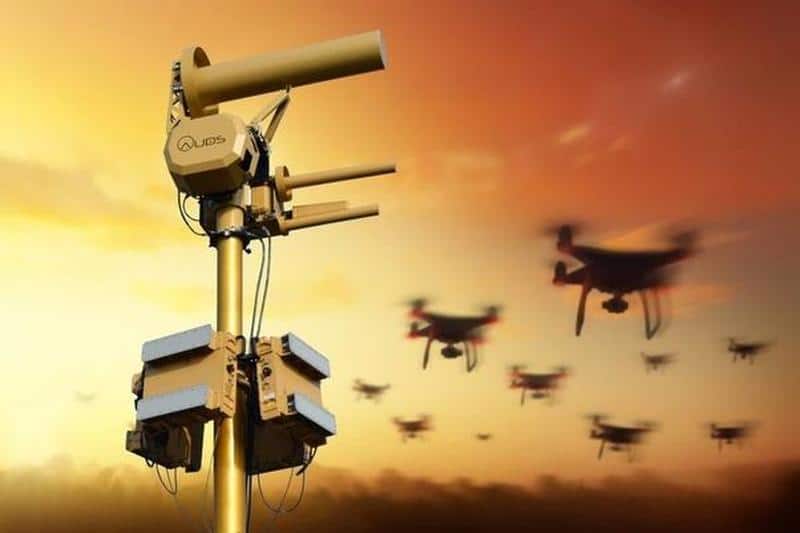 Incidents of use of drones for hostile attacks on civil and military installations have been increasingly witnessed over the last decade since the advent of this paradigm in September 2011, when an unmanned aerial system (UAS), equipped with a C-4 bomb attempted to attack the U.S. Department of Defence and Capitol Hill. The attack was fortunately negated, but represented the first known act of terrorism employing drones.

In a similar terrorist incident in 2016, the Islamic State (IS) exterminated two Iranians in Syria with two ultra-small drones purchased from Amazon. This attack represented a dangerous shift in which commercially available drones were used for terrorism!

The spectre of drone-swarm threats was portrayed in the 2017 YouTube video ‘Slaughterbots’, released by the Future of Life Institute and further endorsed in a 2021 sequel to the video, portraying the lethality and unpredictability of AI-enabled  drone-swarms, especially in the hands of inimical elements!

As if as an endorsement to this chilling prophecy, the Khmeimim Russian Air Base in Syria and a naval base near the Syrian sea-port of Tartus, both located almost 100 Km apart, were simultaneously attacked by armed UAS swarms (sUAS) attacks in January 2018, marking the first incidence of employment of sUAS for hostile activity. The strikes were carried out by 13 fixed-wing sUAS having strap-on munitions. Out of these, seven armed sUAS were shot down by the Russian Air Defence (AD) guns and Pantsyr Surface-to-Air Missiles (SAMs). The attacks were repeated twice the same year and in subsequent years.

The telling effect that drones had in influencing the outcome of the Nagorno-Karabakh conflict in 2020 have led several countries including the US to focus on development of drone-swarms for military use. China’s North Industries Corporation (NORINCO) demonstrated the employment of sUAS in combat during the Zhuhai Air Show in China in November 2018, with a swarm comprising multiple MR-40 and MR-150 drones with a 30 Km range and one hour endurance, equipped with miniaturised surveillance, detection and targeting payloads.

The armed drone attack in June last year on Jammu Air Force Station and other numerous examples of ‘carrier’ drones operating individually or in multiple numbers to drop arms/contraband consignments from across India’s Western Border, present a constant danger. The threat manifestation of sUAS from China or even Pakistan, the latter as a beneficiary to such technology from its ‘all-weather ally’, would increase India’s security challenges manifold.

The world, thankfully, has woken up to this danger and a plethora of global industry players now manufacture counter UAS (cUAS) systems that provide users a comprehensive holistic Detect, Track, Identify and Defeat (DTID) solution through a multi-layered response, which could include electronic attack (directed energy- LASER or Microwave) and kinetic means to defeat such threats. The C-UAS system could also incorporate a command-link control intervention capability, to snatch control of adversary-launched drones and land them safely, as an alternative to destruction.

While non-kinetic or non-destructive methods of neutralising cUAS would find favour due to the obvious advantage of minimal collateral damage, such methods are not necessarily cost-effective or insulated and may lack efficacy in terms of range or effectiveness. Drone RF jammers, for example, would adversely affect own wireless networks. Directed-Energy Weapons (DEW) like LASERs would have high power requirements, resulting in consequent bulkiness in the field. Emerging anti-LASER paint and reflector technology would further reduce the efficacy of this drone counter-measure. Microwave DEW would also face the challenge of low effective range to jam drone circuits, thus being ineffective in preventing stand-off sUAS attacks. Drone-nets would be ineffective for large sUAS swarms. Apropos, advancements in electronic robustness, countermeasures and navigation solutions in cUAS could quickly render existing non-kinetic solutions obsolete, leading to an accelerated technology race. These operational requirements created the technological space for development of guided/ smart micro-munitions, that would be relatively immune to ECM and achieve neutralisation or destruction of incoming drone(s) or sUAS, with negligible collateral effects.

While the argument above centres around anti-drone operations, a need was felt to develop comprehensive counter-measures which would also work to neutralise other incoming kinetic threats, like rocket, mortar or other kinetic projectile attacks. Conversely, the Russia-Ukraine war also highlighted the importance of compatible munitions for Unmanned Combat Aerial Vehicle (UCAV) based operations, either against hostile armed drones or ground-based targets. Such ‘micro-munitions’ would need to be integrated into the avionics of the UCAV for guidance in order to achieve high kill-probability, without compromising flight performance due to excessive weight/ aerodynamic incompatibility.

All the above necessities spurned the development of Micro-Missiles (MM).

One definition of a MM is reproduced below:-

‘A weapon…that contains an advanced tracking system, a high-velocity thruster and a powerful warhead inside a high-manoeuvrability missile no larger than 28 cm (11 inches) in diameter….Micro-missiles are most often used for short-range attack…’[1].

MM would typically have small dimensions/calibre, allowing carriage/simultaneous engagement with large numbers. The missiles would need to have the capability to be launched from platforms in all three domains, to cater for a pan-domain threat. The need for quick acceleration and very low response time would necessitate high speeds, made possible by the use of fast burn-rate, solid fuel propellants. The need for high manoeuvrability to actively engage manoeuvrable and versatile sUAS/ ground targets would necessitate control surfaces and inertial/ in-flight/ terminal guidance, with robust data links/AI for ground-controlled/ autonomous tracking, including in inclement/ night/low visibility conditions. Low stand-off ranges of sUAS would mean that MM can be relatively short-range missiles, typically designed for sub-5 Km engagements. Payloads could be high explosive/EM, depending on threat envisaged. MM should be capable of intercepting and destroying all classes of mini/micro/small UAVs, flying at varying altitudes and speeds including Loitering Munitions. Link to our article on Loitering Munitions:  https://chanakyaforum.com/loitering-munitions-uvision-enables-smarter-precision-strikes/

A MM based system also offers a plethora of tactical advantages in other applications, including in stand-off skirmishes or anti-terrorist operations, as it offers enhanced engagement capabilities, low collateral damage and minimises risk of casualties in contact.

A number of Defence firms in US and other countries are also developing ‘smart’ bullets, equipped with accelerometers and target detection/identification sensors for precision lethal/non-lethal engagements. However, these are presently single-target systems and beyond the scope of this article.

Raytheon of the US tested the Pike MM  in 2015, with a length of 0.43m, weight 0.77 Kg, diameter of 40mm and range over 2 Km. The Pike uses a digital, semi-active laser seeker to engage both fixed and slow-moving, mid-range targets and can be fired from a conventional in-service grenade launcher. Later, Lockheed Martin of the US developed the Miniature Hit-to-Kill Missile (MHTK), for Short Range Air Defence and Counter Artillery/Rocket/Mortar use. The MHTK was first tested by the US Army in April 2016 as a component of the Integrated Air and Missile Defence Battle Command System. In 2018 the US Army awarded Lockheed Martin US $ 2.6 million to begin formal development of the MHTK as part of the Extended Mission Area Missile (EMAM) program. The MHTK is manufactured in active radar homing as well as passive homing versions. It has a mass of 2.3 Kg, length of 0.76 m and a diameter of 41 mm (1.6 inches).

Savage Corporation of the US had developed the Smart Anti-Vehicle Aerial Guided Engagement (SAVAGE), a low-cost, 3D printed composite carbon and aluminium MM. The 40 mm fin-controlled MM is metal-tipped and designed specifically against small UAS, as part of a layered AD system. The MM was designed to be launched from a M320 Grenade Launcher. The MM had AI-enabled computer-vision form target recognition and can autonomously detect and track targets, with the help of a thrust-vectored engine and a solid-fuel propellant rocket motor, giving it a speed of approximately Mach 1 and an effective range of 5 Km. Launcher options included a 15 pound, four-round canister carried by one soldier or a 64-round vehicle-mounted unit for use against large swarms. Inter-communication between MM is via radio for networked, counter-swarm operations.

China’s Wuhan Guide Infrared Company Ltd, showcased the QN-202 MM during Zhuhai Airshow-2018. The MM has a range of 2 Km, weight of 2 Kg and Image Self-Guidance and Lock-On-Before-Launch: this presents an improvement over the Pike Missile, in which the target has to be continuously irradiated by a separate designator. Six QN-202 missiles are carried by one person in a backpack. 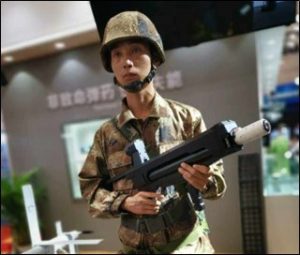 The MoD Technology Perspective & Capability Roadmap for the Armed Forces identifies the requirement of an Anti-Remotely Piloted Aircraft (RPA) Defence System for C-UAS functions. Consequently, Army Design Bureau, in their Compendium of Problem Statements-2020, identified the need for a Counter UAV/Rocket/Artillery/Mortar (C-URAM) System with hard/soft kill options. Post development by DRDO, India’s Raksha Mantri had in April this year handed over transfer-of-technology documents of DRDO’s C-UAS system to various Indian Defence Industry players, including Adani Defence Systems, Larsen & Toubro and Electronics Corporation of India Ltd., among others. DRDO’s C-UAS System presently offers hard-kill via DEW and has been deployed multiple times since 26 January 2020. The system also successfully downed a hostile drone while deployed at Jammu’s Airbase in July last year. These systems could also be modified to incorporate MM-based hard-kill option.

Economics Explosives Limited (EEL), a subsidiary of Solar Industries India Ltd,  is developing a C-UAS system with a MM as a hard-kill component. The system would contain pods or canisters, containing 24/36/48 MM, with each MM weighing upto 2 Kg, with an effective range of 2 Km. The system can be mounted on existing mobility vehicles and can be seamlessly integrated with the detection radar, with a range of 4 to 5 Km. The MM would be mated with an Electro-Optical (EO) system that would ‘classify’, or carry out positive identification of the drone(s) at 2 Km for further engagement. The soft-kill capability would include a RF-based jammer to jam the control loop or SATNAV system of the drone(s). Use of high speed ‘Killer Drones’ as an alternative hard kill option is also under development to augment the MM option. A shoulder-launched MM with a max weight of 1 Kg is also under development which will enable a soldier to achieve a hard kill upto a range of 600m- this promises significant utilisation in mountainous areas and inhospitable terrain wherein C-UAS system vehicles would encounter difficult going.

Zen Technologies Ltd, a Telengana Based Company developing combat solutions for the Indian Armed Forces, has developed the Zen Anti-Drone System (ZADS), which offers multi-sensor drone detection and soft-kill option by way of RF jammers to jam the link between inimical drones and their Ground Control Station. Hard-kill is achieved via a real-time data-feed to a linked AD weapon system. The company has reportedly conducted trials incorporating a L-70 AD gun. Incorporation of a dynamic link to a MM launcher is within the realms of possibility for such systems. ZADS has been awarded a Rs. 155 Crores contract by the Indian Air Force for supply of these C-UAS systems. This contract follows on the heels of the Indian Navy’s contract with Bharat Electronics Ltd for DRDO’s Naval C-UAS System. 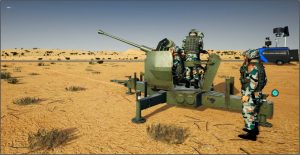 The ever-increasing threat of AI-enabled hostile drone swarms equipped with deep-learning technology to cause widespread damage to military and civil installations alike, necessitate the development of comprehensive mitigation technologies. Hard-kill means like the MM present an option for widespread and ruggedized deployment to accord protection from such threats in all weather and terrain configurations, including in urban settings.