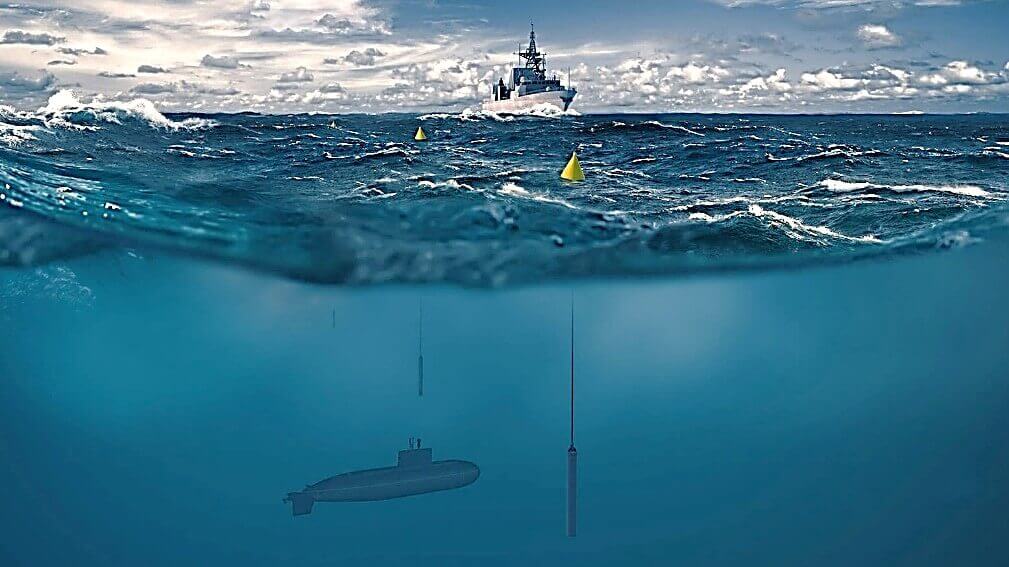 As a further fillip to the ‘Atmanirbhar Bharat’ drive and towards the goal of self- reliance in the Defence Industry, the Ministry of Defence (MoD) has, on 27 August, concluded a contract for 14 Integrated Anti-Submarine Warfare (ASW) Defence  Suites (IADS) worth Rs. 1350 Crores with Mahindra Defence Systems, a fully owned subsidiary of Mahindra & Mahindra Ltd. The selection process involved extensive sea trials of the offered systems from various manufacturers. The contract has been concluded under the Buy and Make (Indian) category of the Defence Acquisition Procedure (DAP)-2020. Under this category, initial acquisition of a portion of the equipment could be acquired in a fully-formed state (if required) from the contracted Indian vendor (Mahindra Defence Systems in this case) engaged in collaboration with a foreign Original Equipment Manufacturer (OEM). Indigenous production in a phased manner would commence with Transfer of Technology (ToT), with a minimum of 50% Indigenous Content ( IC) on cost basis of the Make  portion of the contract. As alluded to by Mr SP Shukla, Chairman, Mahindra Defence Systems, this “…is the first major contract with the private sector meant for underwater detection and protection from threats”.

What is An IADS?

The features/ utility of an IADS needs to be understood in the context of the overall gambit of ASW.

ASW itself remains an inescapable requirement for any sea- going Nation to be able to exercise sea-control over an ocean space. Any contemporary Navy, in its threat assessment, will find the danger from sub-surface threats to be amongst the most serious, with capability to render unpredictable and unacceptable damage to surface maritime assets. If the threat from submarines remains ominous, then the imperativeness of ASW capabilities cannot be overstated. However, gaining mastery over the nuances of ASW is ‘easier said than done’. This is due to the challenges of detection, timely warning and efficacious action that thwarting the sub-surface threat pose, a problem that has only been accentuated by the increasing ambitions and maritime footprints of littoral States.

Threat manifestation has also become more complex due to the varied sub- surface capabilities of potential adversaries, from the propulsion technology employed to the ever-increasing armament profile that submarines the world over now enjoy and the consequent nature of threat (conventional/ directed at surface assets/nuclear/ directed at counter-value targets). Deep water ASW and shallow, littoral techniques also vary greatly in technology and implementation. Another aspect that plagues efficient ASW technology  are the limitations that exist with regards to realistic and operationally oriented training undertaken. This could be a fallout of an ominous and yet invisible threat that many think is only in the realms of wargaming.

Apart from the replete examples of World War II, a live example of the danger posed and the damage that can be wrought by submarines is the British- Argentine Falklands Islands War of 1982. The British nuclear submarine, HMS Conqueror, fired three torpedoes at the Argentine Cruiser, General Belgrano. Two of these torpedoes hit  the warship, which sank within twenty minutes, contributing significantly to the British victory in this war! However, it must be remembered that for most of the conflict, the lone Argentine Diesel- Electric Submarine, the ARA San Luis, continued to oppose the Royal Navy, including ambushing two anti- submarine frigates.  Had the San Luis been successful in its raids and had managed to damage or sink a capital- ship, the British victory might not have been achieved so easily or not achieved at all! The San Luis returned back unscathed in spite of more than 200 anti-submarine munitions fired at it from various platforms- pointing to the inability of the British Fleet to accurately detect the Argentine submarine in spite of an arsenal of five nuclear submarines and round- the-clock airborne ASW operations!

All the above aspects point towards the inescapable requirement of a realistic and threat- driven reappraisal of the existing ASW capabilities  that must be carried out by any maritime Nation to arrive at the modern-day and perspective requirements of ASW technology.  While ASW, per-se, is the conglomeration of many techniques/ processes including the detection/ tracking/ destruction of enemy submarines and subsurface launched weapons, finally aimed towards achieving deterrence against sub-surface threats, there is a dire need to amalgamate the ‘sensors’ and ‘shooters’ (active/ passive ASW delivery systems), including aerial assets into an efficient and responsive operational system. An IADS is just such a ‘system-of systems’ designed to provide an integrated response to underwater threats and in doing so, accord protection to a Navy’s warships and other surface assets.  Had the Royal Navy OR the Argentine Cruiser possessed an efficient IADS Suite in the Falklands conflict, the outcomes might have been quite different! Successful ASW operations would therefore typically involve a combination of sensor and weapon technologies, along with effective deployment strategies. Typically, ISR resources would be employed for first detecting, then classifying, locating, and tracking a target submarine. Sensors are therefore a key element of ASW. Mitigating the threat would then involve delivery of anti-submarine ordnance including torpedoes or undersea mines, which could be launched from a diverse array of air, surface, and underwater platforms. ASW capabilities are therefore often considered as imperative force multipliers in the strategic domain, especially in today’s age of nuclear powered hunter-killer submarines, capable of launching nuclear tipped cruise/ ballistic missiles towards any land mass from the relative refuge of the ocean. 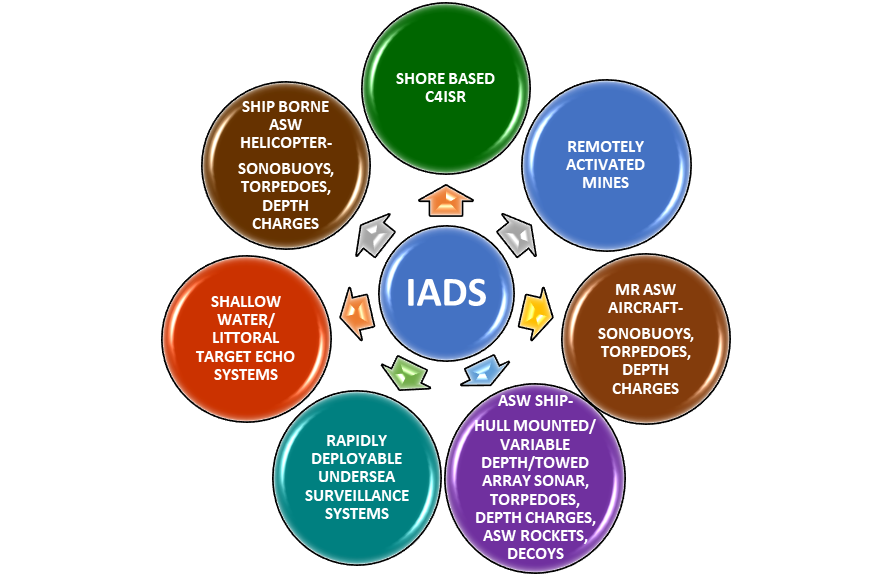 Features of the IADS Suite from Mahindra Defence

As a catalyst to the acquisition process, based on the Technology Perspective & Capability Road Map (TPCR)  of the Armed forces,  the IN’s Directorate of Staff Requirements issued a request for information (RFI) in June 2013, stating that the IN was seeking an IADS Suite that could be fully integrated with a towed array sonar, an anti-torpedo decoy system and an associated fire-control system.

The TPCR is created with the intent to provide the Defence Industry an overview of the direction in which the Armed Forces intend to head in terms of capability over the next 15 years, which in turn drives the technology in the developmental process. It is now based on the 10 years Integrated Capability Development Plan (ICDP) of the Armed Forces, which identifies force capability based on foreseeable strategic trends. From this flows the Five years Defence Capital Acquisition Plan (DCAP) with committed funding, running concurrent with the National Five Year Plans and the Two years Annual Acquisition Plan (AAP) for meeting immediate commitments.

The TPCR entry for ASW elucidates that submarines would remain one of the dominant threats to ships at sea. Hence, early detection at extended ranges, ability to continually monitor movement and take effective action would be a constant pre-requisite. This would be achieved through improved airborne/ shipborne/ shore borne underwater multi-spectral detection, localisation, and identification; remote interrogation and propagation of unattended ASW sensor fields; and improved data-link capability for sharing ASW information and data with submarines and surface ships, as states the TPCR. The surface asset would then employ methods for countering such detected, identified and prioritised underwater threats. The TPCR, importantly, also envisages development of Air Launched ASW Weapons to include intelligent mines, air-launched torpedoes and weaponised ASW Unmanned Aerial Vehicles (UAVs). In addition to these perspective technologies, the IN’s ASW assets have recently witnessed expansion with the induction of the Kamorta Class ASW Stealth Corvettes and will see a further boost to its ASW capability with the future induction of the ASW Shallow Water Craft (ASW SWC), Keel Laying Ceremony of which was held on 06 August. The ASW SWC would be equipped with state of the art underwater sensors and weapons. Coordination, multi-sensor data fusion (MSDF) and fire control of all the above ASW resources would frame the terms of reference for the capabilities of the IADS Suite being sought by the IN.

Based on threat appraisal carried out by the Indian Navy (IN), the IADS Suite would design/refine the fielded mission architecture, as a result of evaluation of demonstrated performance of the system during Field Evaluation Trials (FET). As the system architecture and capabilities would need to be based on threat assessment and operational requirements (eg:- operating/ expecting sub-surface threats in shallow /littoral waters or an envisaged deep sea threat) the IADS Suite will need to be developed based on at least the 10 year ICDP, which in turn would look at a similar temporal threat horizon.

As per available inputs, the Mahindra Defence IADS Suite is likely to feature integrated capability for detecting enemy submarines and torpedoes at extended ranges as well as for diverting incoming submarine-fired torpedoes. The Suite would have versatile employability on all classes of warships. Also, being a system of systems,  the IADS is also likely to integrate the Advanced Torpedo Defence System (ATDS) and the Active Towed Sonar System (ACTAS), that have been inducted into the IN.

While the IN is continuously upgrading its anti-submarine detection and response systems, optimal efficiency of these systems will only be achieved with real- time MSDF and coordination of  threat mitigation systems. Such real-time coordination and integration would necessitate incorporation of the above averred system of systems in the form of the IADS, in order to hone the IN’s response to such ubiquitous and lethal undersea threats.