The National drive to ‘Make in India’ in order to achieve self-reliance in industrial capabilities, particularly in Defence manufacturing, has spawned several projects, ranging from the TEJAS aircraft to various land systems, including Artillery weapon systems.

A plethora of articles on the plans for fulfilment of the Indian Army’s (IA) Field Artillery Rationalisation Program (FARP), conceived in the aftermath of the 1999 Kargil conflict, have appeared across various defence platforms and social media, especially in the last couple of months. Under the FARP, the IA plans to standardise/ streamline the procurement/ development of  approximately 3000 pieces of Artillery, across five categories, including 1580 towed gun systems, 814 mounted gun systems, 180 self-propelled wheeled gun systems, 100 self-propelled tracked gun systems and 145 ultra-light air-portable howitzers. The standard calibre for majority of future Artillery gun procurement would be 155 mm, in keeping with the Indian Artillery’s ‘mediumisation’ plan, with the mainstay being the 155mm towed Artillery guns.

The 155mm Advanced Towed Artillery Gun System (ATAGS), is the brainchild of the DRDO, with the Armament Research & Development Establishment (ARDE) and Armament & Combat Engineering Systems (ACE), located in Pune, intimately involved in its development. Bharat Forge Ltd (part of Kalyani Group) and Tata Advanced Systems Ltd have been entrusted with the manufacture of the weapon system.

Interestingly, a ’precursor’ in some ways to the ATAGS was the Bharat-52, a 155mm 52 Calibre Length (155mm/52) Gun, developed by the Kalyani Group with technology incorporated from foreign vendors. The prototype underwent trials in 2017 but was not accepted for acquisition by the IA.

The ATAGS is a 155mm/ 52 Calibre Artillery Gun, that has been envisioned as an augmentation/ replacement of the vintage 130mm M-46 Russian Gun (now being up-gunned in a phased manner to 155 mm) and the 155mm FH77B Swedish Bofors Gun, both of which have been in service with the Indian Artillery for the last 60/ 40 years respectively.  The ATAGS offers a significant improvement over these earlier weapon systems in terms of lethality, ease of operation and system characteristics, which will be elucidated later in this article.

Evolution and Trial Evaluation of ATAGS

A series of trials to ascertain ability of ATAGS to meet various performance parameters have been conducted over the last six years, including summer/ winter         (high altitude) mobility and firing trials in Pokhran Field Firing Ranges (PFFR) Rajasthan and Sikkim respectively. Major milestones are elucidated in subsequent paragraphs. 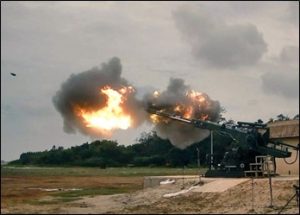 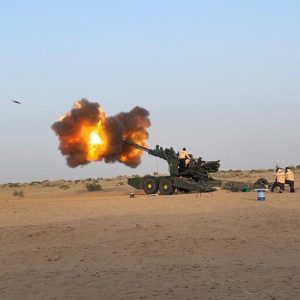 The development of the gun system has seen fructification over a relatively short time of four years, owing to expertise already available from the ongoing development of other indigenous Artillery gun systems. The ATAGS was showcased during the Republic Day Parade in 2017. The first order of 150 pieces, post issuance of RFP, is likely to see fructification by 2026.

Para 24 of the Indian Armed Forces’ Technology Perspective and Capability Roadmap (TPCR), a vision document for capability building until 2027, identifies the requirement “to develop a comprehensive firepower and fire support system based on long-range artillery, rockets and missiles with high lethality, precision and mobility”. It would be incumbent on the developers of any indigenous Artillery weapon system to meet these broad performance parameters.

The ATAGS is a 155mm/52 Gun that is capable of firing a variety of ammunition, including Terminally Guided Munitions (TGM), High Explosive (HE) Extended Range Full Bore (ERFB) and ERFB Base Bleed (BB) ammunition for extended range. It is also capable of firing various charge zones that accord flexibility in achieving different ranges upto 45 Km as per operational/ tactical requirements. The gun has an increased chamber capacity of 25 litres, which is more than other existing contemporary gun systems in the world.

The gun features integration of many state-of-the-art sub-assemblies including an electric drive (used to affect most actions/ functions on the gun), which lends it stability in operation and therefore greater consistency in firing. The use of an electric drive obviates the problems of degradation of hydraulic fluid-based systems in extreme cold and hot weather conditions.

ATAGS is equipped with an Integrated Fire control System (FCS), which incorporates an Automatic Gun Alignment and Positioning System (AGAPS), based on Inertial Navigation System, a Muzzle Velocity Radar and a Ballistics Computer- these subsystems allow for accurate firing data computation and gun-laying, thus achieving very high accuracy and consistency in firing.  The automatic gun alignment system and ballistic computer also lend to faster laying/ orientation of the gun and a consequent greater rate of fire.

The gun is fitted with a powerful 147 HP auto-propulsion unit that accords mobility upto 18 Kmph within the deployment area and to some extent during travelling, thus increasing survivability and enhancing manoeuverability, the latter especially in mountainous terrain. The use of the auto-propulsion unit during deployment significantly reduces the time required by the gun to come into action and be ready to take on engagements, within an express time of 60-120 seconds!

The ATAGS as a holistic weapon system, is endowed with its own gun tower- a specialized Ashok Leyland 6×6 Artillery tractor. The gun tower has a crew cabin and capacity to store the first line of ammunition for the gun. The tower is also equipped with a manually operated hydraulic crane for loading/ unloading of ammunition.

Characteristics of ATAGS in comparison to the Swedish FH 77B Bofors Howitzer are tabulated below. 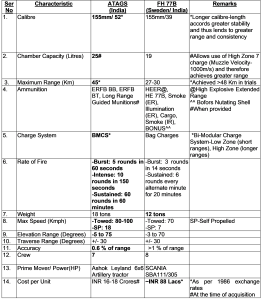 As can be seen from the specifications above, the ATAGS outperforms its ‘predecessor’, the 155mm FH77B in almost all parameters. One pressing concern is the additional weight of the ATAGS. However, the successful mobility trials in high altitude and the powerful auto-propulsion motor would largely offset this disadvantage. In any case, the ATAGS and its other indigenous contemporaries – the 155mm Dhanush (covered in detail @ https://chanakyaforum.com/indias-dhanush-howitzer-has-the-phoenix-risen/ ) and to a lesser extent the indigenously up-gunned 155m Sharang, would be the mainstay of India’s fully/partly indigenous towed gun arsenal as envisioned by the FARP, well into the future.