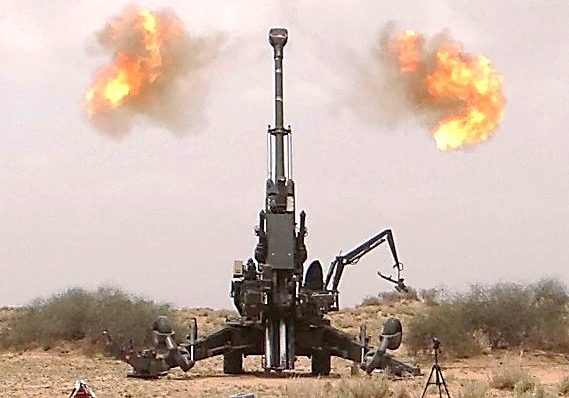 In an effort towards modernising its Artillery profile, the Indian Army (IA) embarked upon the Field Artillery Rationalisation Plan (FARP) post the 1999 Kargil War, with a vision towards streamlining the procurement/development of 3000 pieces of Artillery weapon systems. The Dhanush 155mm /45 calibre Howitzer is part of 1580 towed Artillery guns to be developed/ procured under the FARP towards ‘mediumisation’ of the Indian Artillery, wherein the calibre for all Artillery guns in the inventory of the IA would be standardised to 155 mm. This would accrue advantages of ammunition standardisation, better maintainability and consequent efficient logistics. The Dhanush 155mm/45 calibre Howitzer is India’s first indigenous long range Artillery weapon system and is being manufactured by Gun Carriage Factory (GCF) Jabalpur, now under the Advanced Weapons and Equipment India Limited (AWEIL), a Public Sector Undertaking (PSU) established in 2021 as part of the restructuring and corporatisation of the Ordnance Factory Board (OFB).

The Dhanush Howitzer is an upgraded version of the 155mm/39 calibre Field Howitzer(FH) 77B, manufactured by M/s AB Bofors, Sweden, developed under the ‘Make in India’ initiative, by AWEIL, with technological collaboration from DRDO, Bharat Electronics Limited, Steel Authority of India Limited and other private firms. User evaluation and interface is provided by the Weapons Development & Execution Team of the IA embedded with GCF Jabalpur.

This  contract in the 1980s for the Bofors Guns included the Transfer of Technology (ToT). However, while all ToT documents were  received by OFB from M/s AB Bofors (the Technology Provider [TP]), the transfer of expertise, per se, did not take place as all dealings with the TP were suspended in 1987 on corruption charges. This setback led to the TP becoming inaccessible to the OFB or the IA, as the said ban remained in force until it was lifted in June 1999 during the Kargil War, which saw the Bofors Gun in intense action and therefore raised pressing requirement for spares.

In the late 2000s, the IA decided to look at acquisitions off the shelf (AOTS) in the global market in order meet the FARP’s timelines, which did not fructify. This led the IA to look at indigenous production, leading to conceptualisation of the Dhanush Program, circa 2010-11, in order to replace the indigenous 105/37 calibre Indian/ Light Field Guns, other aging weapon systems and finally the FH 77B. A vital push to the Dhanush Program was provided when the then Director General Financial Planning and future Director General of Artillery, Lieutenant General Anjan Mukherjee, envisioned the development of the Dhanush Gun with expertise gleaned from the Bofors ToT documents. British BAE Systems, which took over the Howitzer Manufacturing Unit of M/s AB Bofors,  offered to provide India with the ToT expertise that had evaded India as part of the scuttled Bofors deal.

While ToT documents provided the technological know-how, development of the Dhanush involved myriad challenges including metallurgy, assembly line and importantly, the sub-assembles required to bridge the technological gap between a two decades old ToT and modern day global technological advancements in Artillery weapon systems. Design development based on ToT documents/ expertise continued through 2013 and in 2014, the first prototype was unveiled by the OFB. Structural evaluation trials were commenced by the IA in the same year. User trials including firing trials in Desert and High Altitude (HA), Quality Assurance trials, Maintainability trials (to evaluate how quickly and easily the weapon system can be in order to return to a serviceable state post failure) and Electromagnetic compatibility trials (to ascertain the ability of the electrical/ electronic systems/sub-systems to function satisfactorily in an adverse electromagnetic environment) were completed in 2016. The IA were provided with six Dhanush Howitzers in July 2016 for GS Evaluation trials, wherein the first three guns of the production-level prototype underwent desert trials at Pokhran/ Babina Field Firing Ranges, with the balance three pieces added between October and December 2016 for HA/ winter trials in Leh Sector.  The final phase of trials, wherein close to 5000 rounds were fired at temperatures of +45ºC to -15ºC and distances in excess of 1600 km were logged by each gun (marking the most rigorous user trials carried out on any gun system), were finally completed in June 2018.

Post clearance of 414 Dhanush by the Defence Acquisition Council (DAC), MoD placed an order for 114 guns in March 2013, subject to clearing of trials, at a contract cost of approximately US $ 2 Billion. The delivery schedule laid out by MoD mandated the  first 18 guns to be delivered within 18 months of signing of the contract. Another 36 guns were to be delivered over the ensuing 12 months, with the balance 60 guns to be delivered by June 2020. However, due to various hurdles in the development process, these timelines were not met.

GCF Jabalpur finally received Bulk Production Clearance (BPC) from the MoD/IA to manufacture 114 Dhanush Guns in February 2019, post completion of trials and rectification of observations raised therein. Bulk production commenced soon after and the first batch of six Dhanush were handed over to the IA in April 2019, with balance guns scheduled to be handed over to the IA in the ensuing three years. The indigenous content in the weapon system- approximately 80% in the first prototype (less the Auxiliary Power Unit [APU], which will be ex-import for the first 24 guns and the sighting system). This was to be ramped up to approximately 91% in subsequent delivery batches, with an Indian firm, Force Motors developing an indigenous power pack. The present revised delivery schedule meant that the AWEIL had to ramp its production capacity to cater for roll-out of the Dhanush as well 300 pieces of the Sharang Gun- a 155mm gun up-gunned from the existing 130mm guns held with the IA.

With the current schedule, the first Artillery regiment was expected to be equipped with all 18 guns by end 2020, by which time 20 guns (including two reserve) were scheduled to be rolled out. However, delays in production and certain structural observations by the IA have restricted delivery to only 12 pieces as on date. Complete equipping of the first Regiment is likely in this FY. 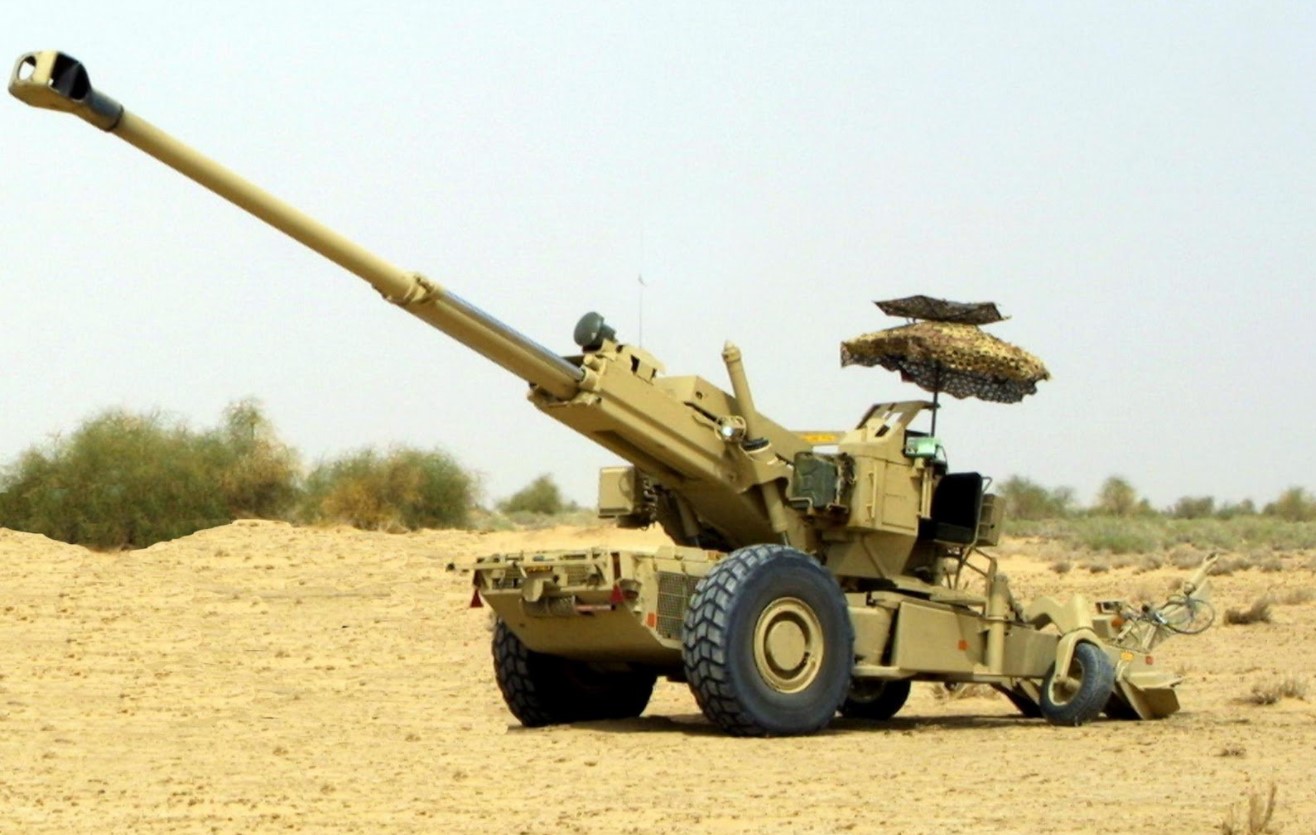 Hurdles in the Evolution Process

While it is normal for any weapon system undergoing pre-induction trials to experience certain functional inadequacies, certain specific incidents plagued the development and delivery roadmap of the Dhanush, which are elucidated below.

How Does the Dhanush Compare?

As has been mentioned, the Dhanush is an upgraded variant of the FH 77B Bofors Gun. While the Dhanush retains the technology of the FH 77B, a number of upgrades have transformed the Dhanush into a more lethal and resilient weapon system, with a longer barrel/ chamber volume, giving it longer range and a higher rate of fire. Some of these improvements over the FH 77B along with a comparative table of basic characteristics of Dhanush, FH 77B and Panter 155mm Towed Howitzer used by Pakistan Army (initially imported from Turkey and later manufactured at Heavy Industries Taxila [HIT]) are elucidated below. 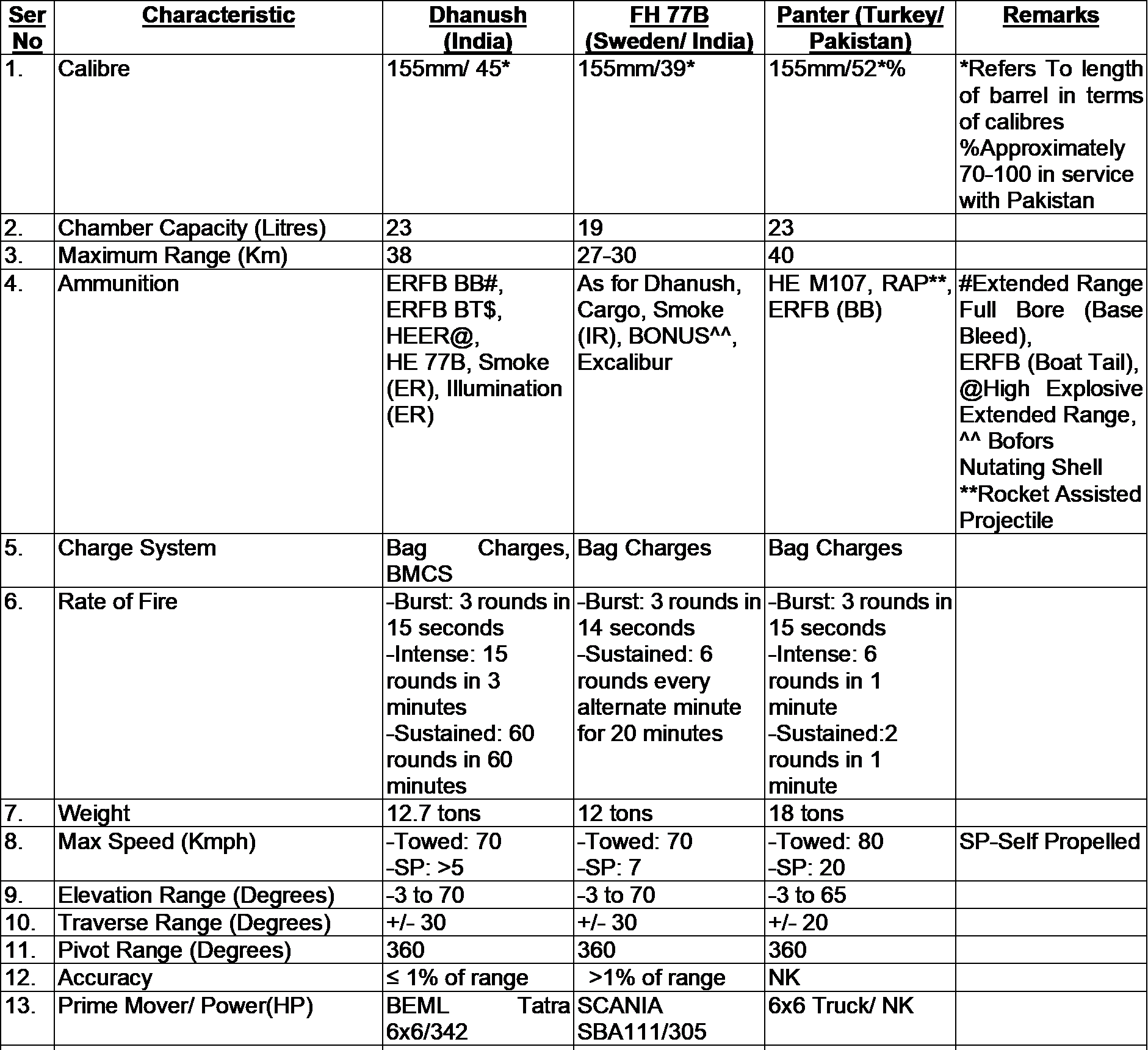 Note:- Pakistan is also manufacturing an indigenous 155 mm Gun at HIT which is presently under trials, for which no data is currently available.

As of now, confirmatory firing trials are underway under the aegis of AWEIL to confirm eradication of observations of shell stability as well as certain observations in the hydraulic system, gun mountings and sighting system before recommencing production. The reactivation of the production line will see Dhanush being inducted alongside the Sharang Gun, mentioned above and will precede the Advanced Towed Artillery Gun System (ATAGS), a 155mm/ 52 calibre gun being developed jointly by DRDO, Tata Power Strategic Engineering Division and Kalyani Group that has just completed HA trials. These weapon systems will of course complement the US M777 Ultra-Lightweight Howitzer and the K-9 Vajra Self Propelled (Tracked) Artillery System that have been operationally inducted.

The Mounted Gun System (MGS) version of the Dhanush was showcased by the Ordnance factory Board (OFB) during Def Expo 2018. The MGS is mounted on a 8×8 Tatra Truck manufactured under license by Bharat Earth Movers Limited. The AWEIL has also developed a prototype 155 mm / 52 Calibre Dhanush variant based on the same modular basic structure of the 155/45 calibre version with slight modifications, which will be able to achieve a maximum range of 42 km.

In addition to the above, the MoD has now contemplated revival of an acquisition contract for 400 Autonomous Towed Howitzer Ordnance System (ATHOS) 155mm/52 calibre guns manufactured by Israel’s Elbit Systems, with a possible follow-on contract of indigenous manufacture of 1,180 guns under a Joint Venture with ToT.  The proposal from the IA was in an advanced stage of approval until it was shelved in September 2019, when it started becoming apparent that indigenous gun development programs including the Dhanush would meet the FARP requirements. However, the sluggish supply of the Dhanush gun and the imminent threats to National security posed by incidents like the Galwan stand-off have catalysed this decision, based on grounds of urgent operational necessity. The proposal now awaits tabling before the Cabinet Committee on Security (CCS) post in house approval, in case deemed to go through.

While it may be true that Dhanush Howitzer has suffered teething problems during development, realisation of the entire amount of 400+ guns (including further tranches of the 52 calibre version) for the Indian Artillery would be imperative for realisation of optimum operational capability. This acquisition would be achieved almost wholly by indigenous effort and is therefore largely immune to the vagaries of global AOTS. It augurs without doubt that ramping up of indigenous production of this frontline weapon system is imperative to augment India’s capability in the scenario of a collusive, two-front war.

May 16, 2022
[…] the ATAGS and its other indigenous contemporaries – the 155mm Dhanush (covered in detail @ https://chanakyaforum.com/indias-dhanush-howitzer-has-the-phoenix-risen/ ) and to a lesser extent the indigenously up-gunned 155m Sharang, would be the mainstay of […]

Dec 11, 2021
Audio is not working. It would be great if it works perfectly. Hope,you take care of that.