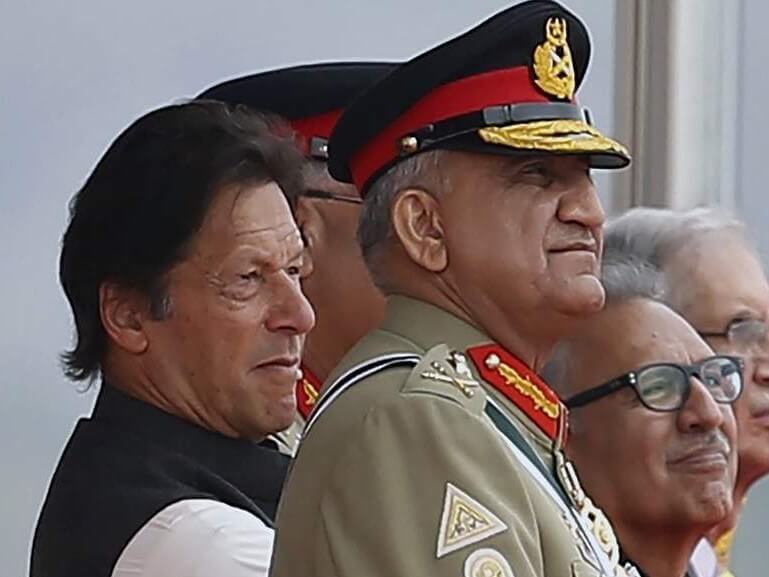 What was supposed to have been a routine transfer and posting in the top echelons of the Pakistan Army has now become a full-blown civil-military crisis. When the reshuffle in the top brass was announced by the ISPR on 6th October, the only issue of interest was that the incumbent DG ISI Lt Gen Faiz Hameed was being posted as Corps Commander Peshawar and would be replaced by the Karachi Corps Commander Lt Gen Nadeem Anjum. Lt Gen Hameed needed to command a Corps if he had to have any chance of succeeding the current Chief Gen Qamar Bajwa whose second term ends in November 2022.

The ISPR initially announced only the military postings – Corps Commanders and principal staff officers – and didn’t name the DG ISI because his appointment is the Prime Minister’s prerogative. It was expected that the PM Office would announce the new DG ISI shortly after the ISPR press release. When that didn’t happen, the ISPR jumped the gun and announced Lt Gen Nadeem Anjum’s name, confronting the PM Office with a fait accompli. But nobody raised any eyebrows because after all this is a hybrid regime in which the civilian government survives on the support of the military. It was when the notification of the new DG ISI wasn’t issued on 6th October that people started getting an inkling of something not being right.

Many people still didn’t make too much of it and expected that the notification would come the next day, or the day after. When that didn’t happen, it became clear that the ‘one page’ narrative was history and there was a standoff between the civil government and the military establishment. Of course, going by Pakistan’s “independent” and “free” mainstream media it would appear that there was absolutely no problem. No newspaper or TV channel has been brave enough to report, debate or analyse this standoff, which has a potential for destabilising the government and if things really spiral out of control even lead to the fourth military coup.

But nearly a week later it is now clear that the civil-military relation is completely broken. Imran Khan has shot himself in the foot by digging in his heels and not issuing the notification appointing Lt Gen Nadeem Anjum as the new DG ISI, something that will have burnt all his bridges with the Pakistan Army and could prove potentially fatal for him. Apparently, the Army Chief had consulted Imran Khan over the new appointments and had received his nod.

The grapevine in Pakistan is that at the last moment something made Imran Khan change his mind. That Imran Khan didn’t want to let go of Lt Gen Hameed is no secret. Not only did Hameed as Deputy DG ISI handle Imran Khan’s entire political rise – rigged the election by making the RTS system collapse, broke parties, intimidated candidates, made people change loyalties – but also played a pivotal role in making the government survive by digging up dirt and using strong arm tactics against the opposition. One example of this is the kidnapping of the Sindh IG Police by the local ISI sector commander to ensure the arrest of Nawaz Sharif’s son-in-law.

With such a stellar track record of service to Imran Khan, it was natural that he would have wanted Hameed to continue. Perhaps Imran, with all his petty insecurities, felt that transferring Hameed out of ISI was a sign that the Army was now no longer going to prop up his disastrous regime. He might have agreed to let Hameed go thinking that it will make it easier to make him Army Chief next year, but would have wanted someone of his choice to replace him. There was a lot of speculation, starting six months back, that Imran Khan wanted the former DG ISPR Asif Gafoor as the next DG ISI, who was lobbying very hard for the job. Imran has a thing for foul-mouthed, obnoxious people like Gafoor – his own cabinet is filled with such characters. But Gafoor’s name wasn’t on the list sent by Bajwa to Imran to make the selection. In the end they both decided on Anjum.

Only they didn’t cater for the Oracle who lives in Imran’s house on the hill – his wife Bushra a.k.a Pinki Pirni. Rumours in Islamabad and Rawalpindi are that the last-minute hitch has been caused by Imran’s clairvoyant wife who didn’t approve of Nadeem Anjum. She has been instrumental in many of the choices Imran Khan has made – Punjab Chief Minister Usman Buzdar or PoJK ‘PM’ Abdul Qayyum Khan, both complete non-entities who were picked because of some mumbo-jumbo done by the lady. Imran Khan apparently has so much faith on her soothsaying ability – he credits her for becoming Prime Minister – that he is ready to even defy the Army. It seems Imran thinks Allah is superior to Army, and has forgotten the old Punjabi adage: ‘rab naerre ya ghasund’ (is God closer to you or my fist).

The current standoff cannot continue indefinitely. Rumours are flying fast and thick in Islamabad and Rawalpindi. There is talk of some kind of compromise being worked out that will allow both sides to save face and walk away from getting into a scrap. But given that Imran Khan has rubbed the Pakistan Army the wrong way on an issue that it brooks absolutely no interference from any civilian, even a compromise is only going to be a temporary solution.

The Army doesn’t really forgive anyone who crosses its path. This is a fight that the civilians invariably lose. Even when civilians have managed to get their appointees as ISI chiefs, the ISI rank and file virtually keeps their Chief out of the loop – for instance, Nawaz Sharif’s appointee Ziauddin Butt had absolutely no idea of what was cooking in the Army when things went south between Musharraf and Nawaz Sharif.

When an ISI chief is appointed against the advice of the Army Chief, the bulk of the heavy lifting, especially on internal issues, is done by the Military Intelligence. ISI officials, who are mostly of deputation, know that their careers in the Army depend not on the civilians but the military high command, and kowtow to the latter.

Politically, Imran Khan has tempted fate. The Army isn’t exactly enamoured of his governance. It has been an unmitigated disaster and most of the flak for that is coming the Army’s way which is blamed for foisting him on Pakistan. But until now they continued to tolerate the regime they had ‘selected’, in part because they had no real viable alternative, and in part because given the sharp slide in economic indicators and the uncertain situation along the borders, any political destabilisation could have worsened the situation.

Imran of course has ignored, rejected, even defied the military in the past – on replacing Buzdar, on embarrassing the military which was trying to bring some normalcy on the Indian front, to name just two. They also did not make much of an issue when Imran spoiled relations with China, Saudi Arabia and other countries, and in fact retrieved the situation. But meddling in the military’s affairs is where the red line is crossed.

While it is entirely possible that the current crisis will be papered over, no one now expects Imran to complete his full term which ends in August 2023. Unless Imran does something rash like sacking Bajwa, don’t expect a guillotine; it will be a more of a halal.

The first salvo might have already been fired in Balochistan, where the incumbent Chief Minister has a rebellion on his hands. Over the next few weeks, chances are that some allies will pull out support. Or before that, a no confidence motion will be moved so that Imran Khan cannot dissolve the National Assembly. Probably there will be a move for an in-house change – most likely a minority government of PTI faction (led by Pervez Khattak?) supported from the outside by other parties. Such a government will stay in office for six months and then fresh elections will be called next year.

The next few days and weeks will decide the fate of Imran Khan and indeed the future of democracy in Pakistan. The Chinese curse of living in interesting times is once again visiting Pakistan.

Oct 13, 2021
Logically speaking, it’s out of character for Imran Khan to stand up by himself against the Pakistani Military Establishment. He doesn’t have the guts to take a strong stance without the backing of some solid force. So, in this case, there’s a good chance that he has some sort of tacit support from certain factions of the US Establishment otherwise General Bajwa would have nailed him hook, line and sinker on day one of their conflict. Anyway, as far as India is concerned, it makes no difference who gets the upper hand in this conflict. In the 3 years of his tenure as PM , Imran Khan has done an excellent job for us by doing irreparable damage to Pakistan, both politically and economically. So, regardless of who ends up in charge of Pakistan, that country is heading down the abyss in top gear.