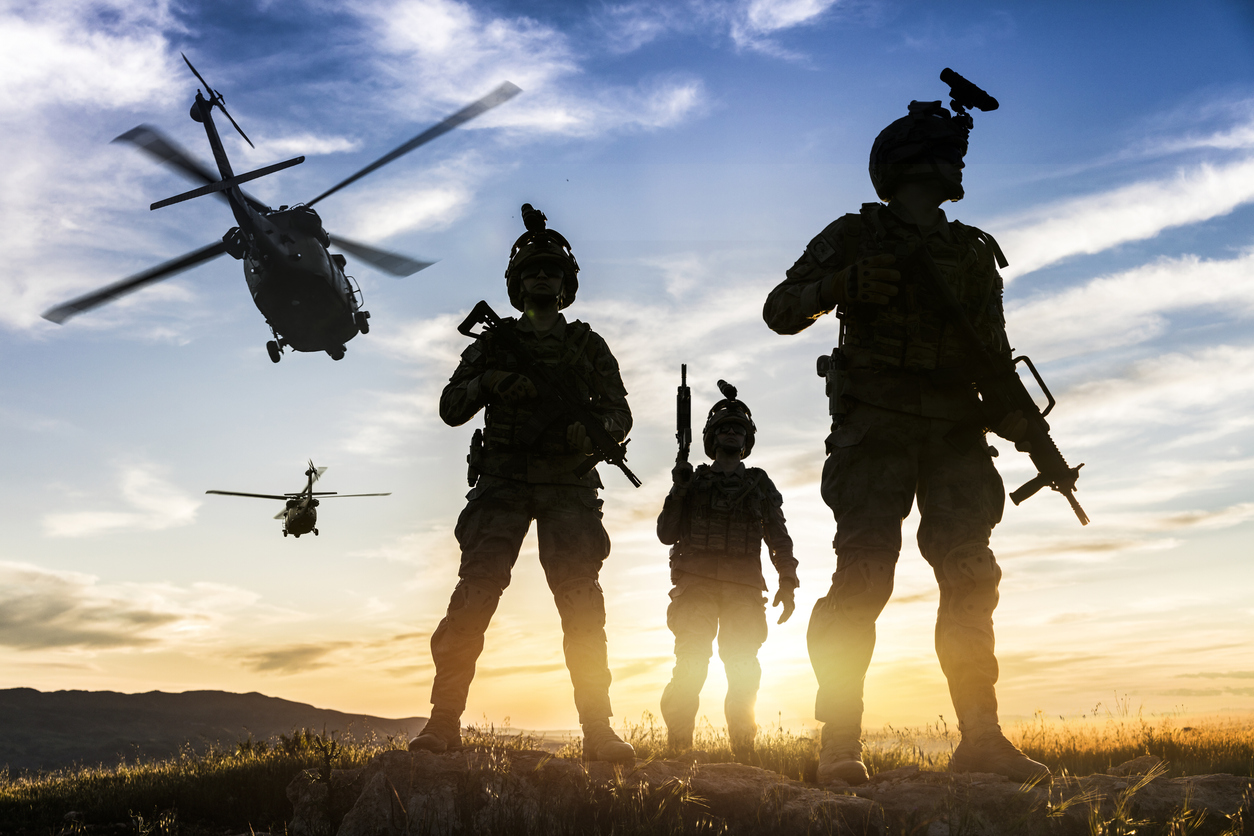 Contemporary conflicts of the not-so-distant past mandated the dismounted Infantry soldier to don personal (protective) battlefield attire and bring to battle his small-arms and any other close-quarter (CQB) battle weaponry. The Infantry soldier was also expected to operate company (subunit) or battalion (unit) support weapons – area weapons, medium/heavy machine guns (MGs) and other battlefield support equipment viz communications (for reporting and coordination from section level and upwards). Of course, more important than physically equipping the soldier was his (or her) training in battlecraft and battle-hardening by fortifying the intangibles of morale, camaraderie, honour and espirit-de-corps.

What Are the Challenges Faced by a Modern Infantry Soldier?

While the Infantry soldier’s tour of duty in today’s contemporary battlefield would encompass all the above tangible/ intangible attributes, what must be kept in mind is the seamless, asymmetric, nebulous and hybrid nature of the battle arena – where an Infantry soldier might be expected to relay battlefield inputs individually up to tactical or operational HQ and quickly receive orders / instructions from those levels, or be expected to operate operational or strategic assets (eg:- relay targeting or intelligence/surveillance/ reconnaissance [ISR] inputs to an unmanned aerial system [UAS] or even to a ground-attack fighter aircraft [FGA]). Also is the inescapable fact that battlefield skirmishes would transcend night and day, with the adversary making all attempts to cloud the perception of the man on ground, necessitating the requirement of and ability to operate multi-spectral sensors for persistent situational awareness (SA). All this, while ensuring that the Infantry soldier is not literally weighed down and still retains the wherewithal for swift, nimble operations, in inclement weather and uncongenial terrain! The need, therefore, to develop a fully integrated soldier system (FISS) to bring to the soldier modern, enhanced and lethal fighting capabilities in an adverse, contested and electronically compromised battlefield environment cannot be overstated.

What Should Be The Facets of an Ideal FISS?

The components of a FISS must enable performance of a wide profile of tasks in pre-conflict, conflict and post-conflict scenarios. This would require optimisation of SA and physical capabilities to develop speedy stimulant-cognition-action response, all the while enhancing the chances of self/ group preservation in an adverse environment. If this be the requirement, then a FISS should ideally cater for the following:-

The inescapable need for empowering the soldier on the battlefield has been well understood and global effort is underway to design, develop and field tailor-made FISS for a number of the world’s Armed Forces. While FISS technology represents the cutting-edge of the land battlespace, a recent analysis by Emergen Research (a syndicated research and consulting firm focusing on upcoming industries) forecasts that the global FISS market would surpass US$15 Billion by 2028, representing a compound annual growth rate of close to 5% during this period!

While many countries including the UK’s Future Infantry Soldier Technology (FIST) and FELIN of France are established FISS programs which are also are looking at development of a future-ready ensemble for the Infantry soldier, either developed ab-initio or from previously existing components, enumerated below are some global FISS projects representative of this paradigm.

Soldier Integrated Protective Ensemble (SIPE) & Subsequent Variants (US). The US has by far had the most long-drawn and intensive FISS development program, stretching over more than 20 years and a multitude of prototypes/ variants. The SIPE was borne out of the vision of the U.S. Army Natick Soldier Systems Centre (NSSC) to develop a modular FISS for the US Army. The road-map for SIPE featured an incremental development, however the development of the SIPE encountered numerous technological roadblocks. The US Army’s Land Warrior System (LWS) program seemed to emerge as the successor of the former, with three principal objectives- improved lethality, increased survivability and necessary wherewithal for command/communications/control to the Infantry soldier. LWS saw operational employment in Iraq and in Afghanistan. These inputs from the LWS were amalgamated into the subsequent Nett Warrior (NW) program. The subsequent iterations of the NW employed a commercial smart phone as an ‘end user device’ for various FISS functions. The NW is in operational use with the US Army Rangers and the 10th Infantry Division, currently the US Army’s most combat- deployed formation. The US Army is currently developing and augmenting the Soldier 2025 Project – a R&D venture featuring nanotechnology, built-in sensors, and physical augmentations in the form of chameleon camouflage, liquid armour combined with Kevlar ( flexible against slow motions like running but hard and impact resistant against high kinetic impacts like a bullet hit), internal body functions sensors, SA to include day/night visual and audio sensors, live feed communication hardware, heads-up display (HUD), digital maps and location of friendly forces. It also includes an internal respirator that obviates the use of gas masks and an exo-skeletal structure for the legs. Another concurrent program is the Tactical Assault Light Operator Suit (TALOS)—which is aimed at providing greater ballistic coverage as well as increased strength—for Special Operations troops. 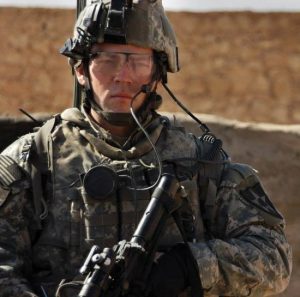 A Soldier of 4th Stryker Brigade Deployed in Iraq, donning the LWS: Source-defensemedianetwork.com 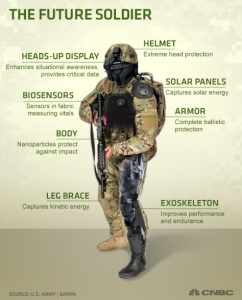 Ratnik Future Infantry Combat System  (Russia). The Ratnik is designed to provide connectivity and combat effectiveness while providing close to 90% protection!  It consists of a multi-purpose helmet, body armour and limb protection, digital camouflage, weapon as well as 24/7 reconnaissance means, a day and night sighting system and optical/ thermal weapon sights. The system also includes a universal shelter, survival accessories and CBRN protection. Communication is provided by the ‘Strelets’ (Musketeer) system, which also includes a GLONASS navigation module for command, control and forwards/rearwards communication by the squad leader. In addition, each soldier has a smaller telephone-sized tactical computer. The Strelets system was operated in the Syrian conflict to send target data to the Su-24 fighter aircraft, with almost 100% accuracy. 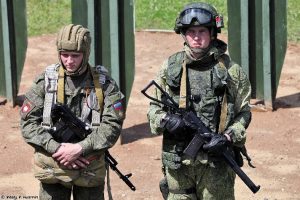 Soldier’s Combat Ensemble (SCE) (Australia). The Australian Defence Force’s Integrated Soldier Systems (ISS) program is an ongoing effort, complemented by Thales Group. The SCE comprises five elements: Load Carriage Equipment including packs (LCE); Protective Equipment (PE); Tiered Combat Helmet (TCH); Combat Hearing Protection (CHP) and Ballistic and Laser Ocular Protection (BLOPS). The LCE also includes Tiered Body Armour System (TBAS) which features add-on scalable components to allow dismounted soldiers to rapidly increase protection levels according to the operational environment. The CHP also provides a radio communications interface. The BLOPS has interchangeable lenses for enhanced SA and eye protection. The TCH offers ballistic and trauma protection and incorporates sensors for SA. Development of a proof-of-concept three Kg fully-passive exoskeleton has been also been achieved to transfer weight of the dismounted soldiers’ combat equipment directly to the ground and reduce fatigue. Cables attach to a rigid backpack frame and run down the back and legs to the base of the boot, transferring approximately two-thirds of the backpack load to the ground. Metabolic cooling, which uses the soldier’s body heat to power a cooling system is also being envisaged.

IdZ (Infanterist der Zukunft) Future Soldier System (Germany).  The IdZ system has already been earlier deployed by the German Army in Afghanistan, Kosovo and Congo, as part of peacekeeping operations. The system is a combination of a plethora of vendor technologies and includes two sets of ten kits for a squad commander and nine soldiers. Each kit comprises a Heckler & Koch G36 rifle with interchangeable day/night sights, a GPS-enabled NavICom system providing C2, secure communications and continuously updated SA /helmet-mounted night vision goggles from Thales, digital tactical headset by Nacre, an Oerlikon Contraves weapon-mounted laser system together with eye protection glasses, a ballistic and stab protection vest and a load-carrying vest. The NavICom system provides the soldier access to mini unmanned aerial vehicles and all-terrain unmanned vehicles for safe reconnaissance and surveillance. 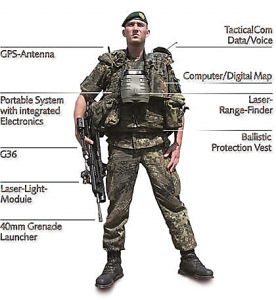 The F- INSAS program was conceived as a ‘system of systems’ in 2005 as part of Infantry Vision 2020 and perceived the soldier to be capable of undertaking various missions in the variegated terrain within and across India’s borders, with a significant enhancement in lethality, survivability, mobility and logistics self-containment. However, the F-INSAS program was quickly split into a personal enhancement program encompassing the weapon, protective equipment & logistics and a separate Battlefield Management Systems (BMS). The Technology Perspective and Capability Road Map (TPCR) 2013, underlined the requirement of a ‘wired and net-connected’ Infantry soldier integrated with the BMS and equipped with state-of-the-art weapons. 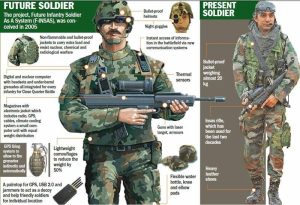 The modern battlefield is characterised by swift manoeuvre, low reaction times and an omnidirectional enemy, not to mention the additional conundrum of hybrid warfare. In order to be able to prosecute practical operations in such challenged scenarios, there is a need to significantly empower the ‘boots on ground’ with real time situational awareness and increased combat capability. The FISS is one such paradigm which is now a necessity and a reality.