Hobbled by Economy, Erdogan Heads to Saudi to Mend Ties 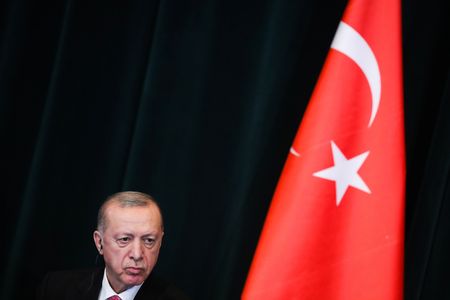 By Tuvan Gumrukcu and Jonathan Spicer

ANKARA (Reuters) – Three and a half years after accusing Saudi Arabia’s leadership of murder and running a sham trial over the killing of journalist Jamal Khashoggi, Turkish President Tayyip Erdogan plans a trip to the Gulf kingdom on Thursday to mend ties.

Khashoggi, a critic of the Saudi government, was killed by a Saudi hit squad at the kingdom’s Istanbul consulate in 2018. At the time, Erdogan accused the “highest levels” of the Saudi government of giving the orders, and slammed Riyadh’s own legal process while refusing to share evidence with them over concerns of tampering. With Turkey’s economy now facing deepening woes and tough elections looming, Erdogan is pushing to mend Ankara’s strained diplomatic relations.

The trip is the culmination of a months-long effort by Ankara to repair ties with Riyadh after Saudi Arabia imposed an unofficial boycott on Turkish imports over its stance on the Khashoggi murder, and marks a dramatic shift by Turkey. Ankara’s decision this month to transfer its own legal case over the murder to Riyadh on the kingdom’s demand was criticised by rights groups and the opposition. But analysts and diplomats say the rapprochement was much needed given the isolation Turkey faced diplomatically.

“Turkey cannot continue this sphere-of-influence game that it has been pursuing since the beginning of the Arab Spring,” said Birol Baskan, Turkey-based non-resident scholar at Washington-based Middle East Institute. Turkey has in recent years established military bases in Qatar and Somalia despite opposition from regional actors. Ankara’s positions on the conflicts in Syria, Libya, Nagorno-Karabakh and elsewhere, as well as the acquisition of Russian defence systems, have also caused friction with neighbours and NATO allies.

“Turkey’s aggressive foreign policy, its self-aggrandizing perception has left it excluded,” Baskan said, adding that economic conditions necessitated a change of approach. Ankara describes its foreign policy as “entrepreneurial and humanitarian” and the foreign minister has called 2022 “the year of normalisation” for Turkey.

The government has said the Khashoggi trial decision was not political. Before the move, Foreign Minister Mevlut Cavusoglu said conditions for “judicial cooperation” with Riyadh had not been met previously, but the sides were implementing it now. He did not say what had changed. Turkey’s economy has been ailing for years and a lira crisis erupted in late 2021 due to an unorthodox monetary policy backed by Erdogan. Ankara has since been looking for ways to alleviate the pressure via international rapprochements.

In addition to existing currency swap deals with China, Qatar, South Korea and the United Arab Emirates – worth a total of $28 billion – Ankara is eyeing a deal with Riyadh. It also seeks investments and contracts, similar to those inked with Abu Dhabi. On Wednesday, Turkish Finance Minister Nureddin Nebati said he had discussed cooperation and exchanged views on the economy, trade and investments with his Saudi counterpart.

After its foreign policy left it isolated in its region and beyond, Turkey launched a charm offensive in 2020 to repair ties with estranged rivals, making overtures to Egypt, the UAE, Israel and Saudi Arabia. Efforts with Cairo have so far yielded little progress but normalisation with the UAE and Israel has improved commercial and diplomatic ties. Relations with Riyadh had remained frosty while the kingdom sought a solution to the Khashoggi dispute.

Ankara had demanded senior Saudi officials be prosecuted for the murder, criticising as inadequate a Saudi verdict jailing eight people for between seven and twenty years over the killing. However, it has since sharply softened its tone as far as saying it has no bilateral issues with Riyadh. Ankara also gave a muted response to a U.S. intelligence report, which said Prince Mohammed had approved the killing. Riyadh denied any involvement by the Crown Prince and rejected the report’s findings.

With the Khashoggi case back in Riyadh and Turkey revising its regional policies, analysts and officials believe political obstacles to normalising ties with Saudi Arabia and ending the trade boycott have been removed. Turkish exporters believe the boycott, which slashed their exports to Saudi Arabia by 98%, will now end. Neither side has confirmed a resumption of trade yet.

“There are talks between companies now, we have also gotten in contact with our old clients,” said Hasan Gumus, chairman of agribusiness firm Yayla Agro, adding trade would return to old levels rapidly when resumed. “The crisis Turkey had with Saudi Arabia is over now,” said Middle East Institute’s Baskan. “Erdogan might secure some capital and state contracts. This is a major foreign policy reversal but it will be good for Turkey.”

May 11, 2022
There is only one bottomless font of cash for the world filled with despotic, tin-pot dictators. Where else but Saudi Arabia will they, and Erdogan, go? While considerable dollars have left Saudi to fund initiatives, their net result is heavily negative. Alternative fuels of every kind, and ridding our dependence on oil, couldn't come a day sooner.