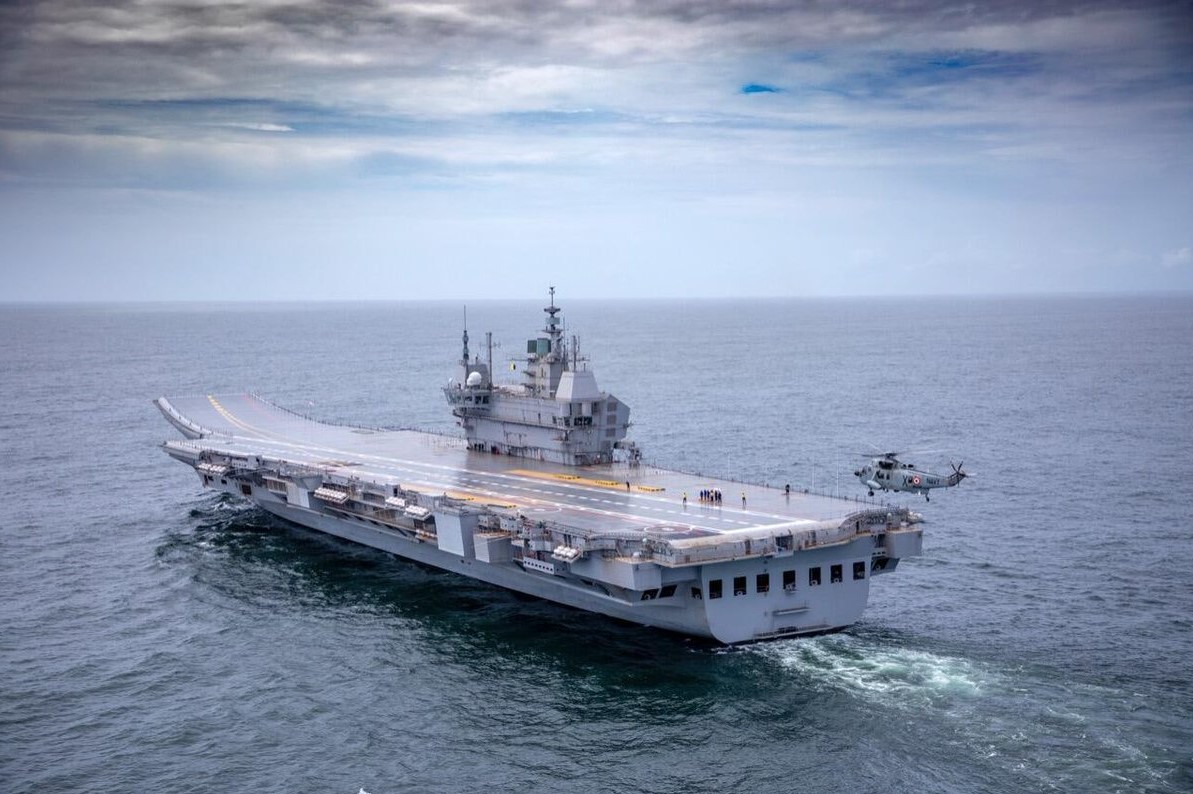 ‘Vikrānta (विक्रान्त)- “one who is courageous, bold, strong and victorious”,  a synonym for the Lion (Simha)’

02 September 2022 has emerged as a singular date in the annals of the Indian Navy’s glorious heritage and can be likened to a similar important day in 1654, when the first keel of a Maratha Naval vessel was laid down in a creek near Kalyan! Indeed, the maritime prowess of the Marathas under Chhatrapati Shivaji and later under Sambhaji are legend! In fact, by the time of Chhatrapati Shivaji’s coronation in 1674, the Maratha Navy was a force to reckon with, with over 50 warships.

In the words of the Hon’ble PM, the new Ensign is a symbol that the Indian Navy (IN) has shed its colonial past. The Ensign features the National Flag on the Canton, or the upper-left corner, symbolizing the supremacy of National interest in all of the IN’s roles and tasks.  On the right, is a gold-lined blue octagon shield which represents the IN’s multi-directional reach and multi-dimensional operational capability. Within the shield is encompassed the National Emblem, sitting atop an anchor, representing the steadfastness of the IN to India’s National cause. The ribbon at the base of the anchor is inscribed with the words ‘Sham No Varuna’ (“Be Auspicious Unto Us O Varuna”!), in Devanagri script, invoking the blessings of the Mythological God of the Seas. The IN motto is taken from the Rig-Veda and was suggested by C Rajagopalachari, eminent Indian Statesman and freedom fighter.

The Ensign stands for India’s commitment to self-reliance in support of the IN’s quest to transform into a true blue-water Navy and a net security provider in the regional maritime commons and represents the IN’s vision of developing into a multi-domain instrument for National power projection, while incorporating world-leading technological advancements, that, in the words of Admiral R. Hari Kumar, PVSM, AVSM, VSM, ADC, Chief of Naval Staff, would make the IN ‘future-proof’!

Subsequent to the unfurling of the Naval Ensign, the Hon’ble PM formally commissioned India’s first indigenous and largest Aircraft Carrier (AC), the INS Vikrant. INS Vikrant, India’s Indigenous AC (IAC)-1, has been designed by the IN’s Warship Design Bureau (erstwhile Directorate of Naval Design) and constructed by Cochin Shipyard Limited (CSL), a fully Government owned shipbuilding and ship repair company under the Ministry of Shipping. This has propelled India into an exclusive and elite league of a handful of Nations that have indigenous AC technology! The INS Vikrant is a worthy successor to the original AC by the same name, which played a pivotal role in Naval power projection during the 1971 Indo-Pakistan War and had been the capital ship of the IN for over three decades, till she was decommissioned in January 1997. INS Vikrant has also adopted the motto and pennant number (R11) of her predecessor. The motto ‘Jayema Sam Yudhi Sprudhah’, translates to “We conquer those who fight us” and has also been adapted  from the Rig-Veda. 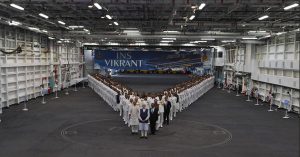 The INS Vikrant Project, as part of the Indigenous AC Program (IACP) was undertaken in three contract phases between MoD and CSL, which were concluded in May 2007, December 2014 and October 2019. Read more about the IACP @ https://chanakyaforum.com/indigenous-aircraft-carrier-indian-navys-veritable-varuna/. The keel of INS Vikrant was laid in February 2009. The carrier was floated out of dry dock in December 2011 and launched in August 2013. Basin trials of the AC were completed in December 2020 and first sea trials were conducted in August last year. INS Vikrant has now successfully completed five sets of sea trials. In a press brief last month, Vice Admiral SN Ghormade, PVSM, AVSM, NM, ADC, Vice Chief of Naval Staff, stated that “…from the propulsion, equipment and weapons point of view, the ship is fully operational.”

Built at a cost of Rs. 20,000 Crores, INS Vikrant, with a loaded displacement of 45,000 tons, 14 decks and 2300 compartments, would typically fit between the global classification of Light ACs (~40,000 tons displacement) and Medium ACs (~ 50,000 tons displacement). The AC is 262 m long/ 62 m wide and will board a crew complement of 160 Officers and 1400 sailors. It is powered by four General Electric LM2500+ Gas Turbine Engines generating 88 MW (1,18,000 HP) and propelling the AC to a maximum speed of 28 Knots. The AC features a Short Take-Off But Arrested Recovery (STOBAR) configuration for aircraft launch/ recovery and a ski- jump. The AC will carry upto 30 aircraft, including the under-selection Deck-Based Fighter Aircraft (DBFA) and a combination of  Kamov Ka-31 Airborne Early Warning and Control (AEW&C)/ Westland Sea King Anti-Submarine Warfare (ASW) Helicopters/ Lockheed Martin MH- 60 R Seahawk Multi-Role Helicopter/ Maritime Reconnaissance and Coastal Security (MRCS) Advanced Light Helicopter (ALH). The INS Vikrant, along with the IN’s other operational AC, INS Vikramaditya, completes the requirement of ACs for the IN’s Eastern and Western Naval Fleets.

Approximately 76% of the INS Vikrant is indigenous, which hails the coming-of-age of India’s indigenous Defence R&D and manufacturing industry. The indigenous content predominantly includes the body, with the indigenisation of the propulsion system and the weapon system configuration at 50% and 30% respectively. The body’s indigenous content also includes DMR 249 anti-rust steel developed by DRDO’s Defence Metallurgical Research Laboratory (DMRL) and Steel Authority of India Limited. Bharat Heavy Electricals, Larsen & Toubro, Kirloskar Group, Best & Crompton and Elecon Engineering are among the prominent Indian companies that have manufactured various components/ assemblies. Further, as a testimony to India’s now-vibrant Defence industrial base, over 90 Indian Original Equipment Manufacturers, over 100 Micro, Small and Medium Industries (MSMEs) and over 500 Ancillary Industries have contributed to the building of INS Vikrant. The AC’s Combat Management System (CMS) has been pioneered by Tata Power Strategic Engineering Division, with Russian collaboration. It is the first CMS developed by a private company for the IN.

The DBFA landing trials, which will also validate the Aviation Facility Complex aboard the INS Vikrant are scheduled to commence in November this year. The IN is considering the US F/A-18 E/F Block III Super Hornet and the French Rafale-M (Maritime), as contenders for the DBFA for the INS Vikrant, as a replacement for MIG-29K carrier-based fighters. Future AC including INS Vishal (IAC-2), slated to be India’s third AC or a replacement for  INS Vikramaditya and likely to enter service by the mid-2030s, will board the indigenous Twin Engine Deck-Based Fighter (TEDBF), currently under development by the Aeronautical Development Agency (ADA), in collaboration with DRDO.  Read more about the DBFA for INS Vikrant @ https://chanakyaforum.com/rafale-or-f-a-18-super-hornet-who-will-board-indias-vikrant/ .

How Does INS Vikrant Fare in The Regional Arena ?

15 Navies worldwide today have ACs in service or under construction. In the regional context, four Asian Nations including India, China, Japan and South Korea have AC operating fixed-wing aircraft.  India’s AC fleet now ranks only next to China in terms of numbers. China presently operates the Type 001 Liaoning and Type 001A (002) Shandong ACs. The Liaoning is a Soviet Kuznetsov Class AC with a displacement similar to INS Vikrant at 43,000 tons and also features STOBAR configuration with a ski-jump. The capability of the Liaoning AC to carry upto 36 aircraft is similar to the INS Vikrant. The STOBAR ski-jump aircraft handling configuration of the Liaoning poses significant performance limitations on the J-15 fighters which have a maximum take-off weight of 33000 kg, greater than that of the F/A-18 Super Hornet or Dassault Rafale being considered as DBFAs for INS Vikrant. This aspect would be further accentuated in favour of the IAC-2, which will have a Catapult Assisted Take-Off But Arrested Recovery with Electromagnetic Aircraft Launch System (CATOBAR- EMALS) configuration, presently used on US Navy ACs. The operational range of the INS Vikrant is 7500 Nautical Miles (~14000 Km), more than double that of the Liaoning! China’s Shandong AC also sports a STOBAR configuration. It enjoys a slight dimensional/ operational edge over the INS Vikrant, with a length of 315 m, displacement of 65,000 tons, range of 25000 km and carrying capacity of 44 to 48 aircraft. However, most of these disadvantages would be overcome in IAC-2. The Chinese Type 003 AC, Fujian was launched on 17 June 2022 and is China’s first AC with a completely indigenous design. The Fujian, with a displacement of ~85,000 tons, is propelled by four Steam Turbines and would also feature a  CATOBAR- EMALS configuration, with a similar aircraft carrying capability as the Shandong. The name Fujian generated global interest, since, similar to other ACs named after Chinese provinces, the Fujian was also named after a Chinese province, but one located opposite Taiwan! The Type 004 (construction reportedly commenced in December 2017) is likely to feature nuclear propulsion and be commissioned by the end of the decade. It is likely to carry the J-15 and J-31 5th Generation Fighter Aircraft as well as AEW&C and ASW platforms.

An objective assessment of the IN’s capability across the regional maritime space is apt in the context of China’s expanding maritime operational capabilities, which could take on a pan-domain dimension, either by way of coercive diplomacy or more aggressive actions.  It is in this milieu that India must ensure that its Armed Forces are battle-ready and capable of thwarting any misadventures or coercive actions across the land, air and sea domains. Further, India’s accepted role as a net security provider in the Indian Ocean Region behoves that the IN is a potent, muscular and omni-capable force to assure the littoral  Nations of continued peace, stability and security in the region.