Why the Victory of 1971 Must Remain a Psychological Landmark 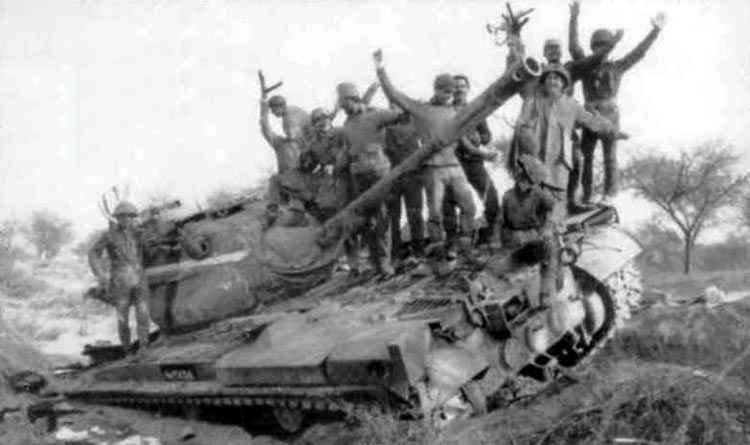 In India the mention of ‘1971’, in a gathering or individually, evokes elative sentiments of victory. Having defeated Pakistan comprehensively on the battlefield, attained both the political and military objectives in 14 days and created a new nation (Bangladesh), India could justifiably be proud of its achievements. The celebration of Vijay Diwas on 16 December each year is an apt reminder of an important milestone in the nation’s post-independence history which needs to be etched in public memory, generation to generation.

However, it’s not just a point on the graph. The true worth of public recall comes when there is a connect with the various battles, the method of planning and execution and the personalities that led and participated in these operations. Military history isn’t one of our greater domains of focus and although nationalism may be rife today the true worth of nationalistic fervour realized from achievements against odds in the dust and gore of battlefields, there is very little that connects India’s public to the reality of its own military history.

Before describing some of the events and happenings of the India-Pakistan War of 1971 for public information, let me propose to the Armed Forces of India and the Ministry of Defence that there needs to be a change in concept to bring India’s military achievements to the realization of our public in a more focused and professional way. On Vijay Diwas 2022 it’s my intent to place a proposal that we need to give ‘1971’ and its military related events the right context and fully appreciate the significance of each to help build inspiration and enhanced confidence of the public in the armed forces.

The war may have started in December 1971 but the plans and the preparation to achieve assured success commenced immediately as the first signs of the effects of Pakistan Army’s Operation Searchlight came to light. The targeting of Bengali intellectuals and civil society was one of the aims of Pakistan to subjugate and prevent any further attempts at raising issues concerning the rights of the Bengalis.

In a much-publicized interaction between Prime Minister Indira Gandhi, her senior cabinet colleagues and General (later Field Marshal) Sam Manekshaw, the latter insisted on seeking more time for any potential response to Pakistan’s waywardness. The Service Chiefs are best placed to analyse and give such advice, but the political authority too must have the confidence in the abilities of the military leadership to recommend such self-assured measures. In 1971 a decision was appropriately taken based upon correct military advice. The political leadership and the opposition also backed the armed forces completely.

What should be known is that there were four prime reasons why the Field Marshal sought more time before any response.

By deciding that no response should be made before the winter of 1971 we could afford to redeploy troops.  A good illustration of this was Headquarters (HQ) of 4 Corps which was moved to the eastern flank to take under command the unattached formations involved in counter insurgency operations in Nagaland and Mizoram. Both 8 and 57 Mountain divisions thus formed an important part of the Eastern Command order of battle under HQ 4 Corps which left a Rear HQ behind at Tezpur to cater to the Arunachal Pradesh border.

As a result of resource optimization some additional units were raised thus affording the raising of HQ 2 Corps to become the third Corps size formation HQ to take charge of an important flank of the Eastern campaign. Among other aspects of resource optimisation HQ 101 Communication Zone Area from Shillong was drafted to fill the gap between 33 and 4 Corps. This gap turned out to be the crucial one through which the race to Dhaka could be set up.

It’s interesting to be aware of the fact that Dhaka was perhaps never the terminal objective. Just like 1965 when an opportunity arose to target Lahore the Indian military hierarchy advised the political leadership not to be misled by the attraction of the city and its fame whose massive built-up area would absorb troops faster than we could capture the entire city. Dhaka would prove the same and take away attention from elsewhere in the campaign.

The decision to make Dhaka an objective came up as a part of contingency planning. Once Lt Gen Sagat Singh’s (GOC 4 Corps) forces had crossed the River Meghna by an unconventional heliborne operation (4/5 Gurkha Rifles) and there were troops available with no obstacle up to Dhaka, the final decision to target the centre of gravity was taken. That Dhaka could have been better defended and had the capability to last out if there was a stomach for a fight displayed by Lt Gen AAK Niazi, was obvious. However, he thought the better of fighting a losing cause and inflicting casualties on his own troops as a result of such a decision. The Pakistan Army’s reputation touched rock bottom at that time.

That the Pakistan Army displayed a stellar but stray resolve in putting up a fight cannot be denied. There were individual acts of valour as can be expected from any body of formed troops. What seemed to have hit their morale was the manner in which the senior leadership of Pakistan treated them and left them to their fate with false promises of resources knowing fully well that an ocean separated them from the promises and their delivery.

Interestingly, when one converses with Pakistan Army officers of that time or even with those who have inherited the mantel there seems no acceptance of defeat. I have sat across the table with many such Pakistani officers who continue to believe that the war in the East was fought by India using the wiliness of the Bengali citizens who joined ranks with the Indian Army in the form of the Mukti Bahini. Without its assistance they believe India could never have progressed into the heart of East Pakistan. They also believed that the local superiority built by the Indian Army and the Indian Air Force was due to the isolation of East Pakistan. The true worth of the Pakistan Army as per their belief, was on the western front where it held back the Indian Army from achieving its objectives.

What is hardly realized in Pakistan is the fact that as a part of the Indian strategy the western front was only to be held defensively and limited offensive action was to be undertaken in the form of strategic spoiling attacks to prevent the Pakistan Army from engaging in any decisive operations which could threaten our balance and upset our plans for the early capitulation of the Pakistan forces in East Pakistan.

From North to South all sectors seem to have been activated without losing balance. The one sector where a dangerous situation developed for the Indian Army was in Akhnur where just like in 1965 Pakistan managed to achieve surprise and build a local superiority to advance and cut off the crucial Jammu-Rajouri Road at the Akhnur iron bridge. Resolute defensive action finally thwarted the Pakistan Army operations.

In the Kashmir sector operations were launched by us to capture the Lipa Valley. A large part of it was captured by the Dagger Division but portions of it held on and efforts to straighten the bulge continued even after the war. This was the one area where operations continued till March 1972 almost unknown to the world. Today the uncaptured parts of the Lipa Valley form some of the crucial launch pads from where infiltrating terrorists are launched into India. The capture of Lipa Valley and the Bugina Bulge which falls between Tangdhar and Keran, remain unfinished tasks of 1971 and would in all probability be the targets of any future war.

Some of the most intense operations of the western front were executed in the desert sector of Jaisalmer and Barmer. Famous battlefields associated with this area include Longewala and Naya Chor. The former is the battle also depicted in JP Dutta’s famous film ‘Border’. Naya Chor was the sub sector of Barmer where a Special Forces operation of 10 Parachute Regiment (Commando) under the command of His Highness (HH) Colonel Bhawani Singh was conducted employing Nissan Patrol vehicles for mobility. A unique operation which created panic in Pakistan Army ranks, it won a Mahavir Chakra (MVC) for the Commanding Officer Colonel Bhawani Singh and led to the realization of the potential for employment of Special Forces in the India Pakistan context.

The purpose of this write up is not just to remind readers of some of the forgotten snippets of 1971. It is also to delve into the psyche of the modern Pakistan Army. 50 years after its abject defeat in battle in almost every sector of the large front, it refuses to acknowledge the same and is quite confident of turning the tables on the Indian Army.

It’s important that we take note of this because to ignore such an observation and fact would prevent us from optimizing our capability to achieve even more than what was achieved in 1971. The study of 1971 and especially the psyche and mindset of the Pakistan Armed Forces is a mandatory aspect. There is no level which must be ignored because there are lessons to be learnt at every such level. Admittedly there cannot be a better time to devote to such study than the period around Vijay Diwas each year. For all the attention that the Northern borders are demanding due to Doklam, Galwan or Yangtse, there can be no ignoring of Haji Pir, Akhnur, Dograi, Sehjra Bulge or Rahim Yar Khan.

Pakistan may be low in energy and capability today, but this may not be the situation tomorrow. It’s for tomorrow that we prepare with a better knowledge and background of what happened at those various fronts in the past. That will always give us the psychological edge.